Were pyramids that are twice as old as the Egyptian pyramids found in Russian Lapland and does the photo with this article accurately represent what they look like? No, that's not true: Clickbait photos misrepresent what the Kola Peninsula is, and exaggerations surround a 2007 expedition to investigate some unusually shaped hills on the Peninsula.

Footage from that expedition was featured in a 2008 Russian TV program. The archaeological significance of these hills remains to be determined. There also appears to be a desire of some to connect the myth of Hyperborea with a real place.

On August 3, 2020, an article titled, "Mysterious Kola Pyramids Built By An Unknown Lost Ancient Civilization Can Rewrite Ancient History" was published on the website ancientpages.com. The text of the article closely follows a January 30, 2008, Russian-language article published in the Russian newspaper Vzglyad. These have been copied by other websites, and alternate images have been substituted for the original pictures.

An archived copy (here) of an article titled, "Pyramids Discovered In Russia 'Twice' As Old As Egyptian Could Rewrite Human History" on collective-spark.xyz shows it was first published on November 15, 2021. Other websites, beautyofplanet.com, bizsiziz.com and deshinewspost.com have all published the same article misrepresenting the substituted photos. On September 22, 2022, a post with a link to collective-spark.com and two images was posted in the Facebook group "Official 4biddenknowledge Group." It was captioned: 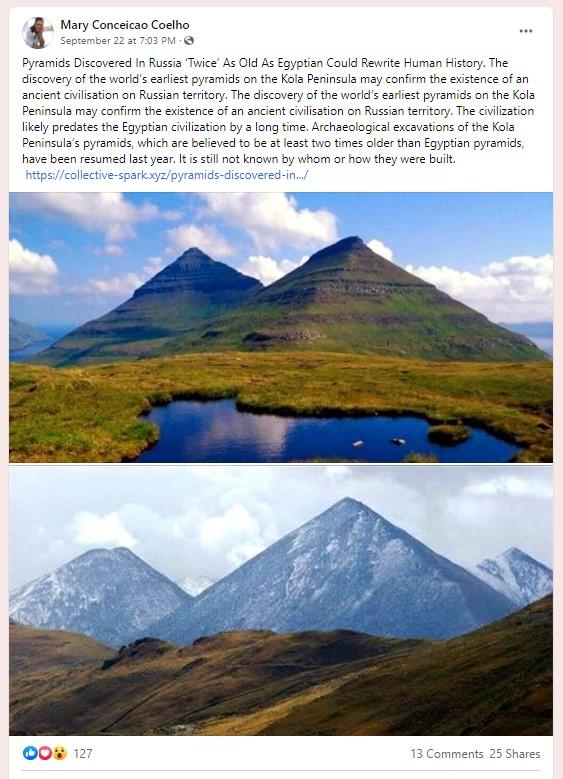 The second photo in the Facebook post (directly above) has not been geolocated. This photo is frequently misrepresented in articles about the "Pyramids" of Russia's Kola Peninsula, but this is not what they look like. This photo has also been mislabeled to represent the Pyramids of the Crimean Peninsula, but this is a one-off caption that is not repeated with any verification tying it to Crimea.

The upper photo is not a scene from the Kola Peninsula either. This shows Klakkur mountain near the town of Klaksvik, on Borðoy Island in the Faroe Islands, part of the kingdom of Denmark. Klakkur mountain is not a pair of man-made pyramids, the two peaks are joined by a long ridge. The Faroe Islands were made naturally about 55 million years ago by many layers of lava flows and volcanic ash. These layers have caused the step-like texture of the mountainside. Below is a composite image showing the Google street view of Klakkur mountain that approximates the view in the photo, as well as a view from the side, seen looking at it from across the town of Klaksvik.

In Greek mythology there was a northern paradise inhabited by Hyperboreans, described by Britannica:

The Hyperboreans were named with reference to Boreas, the north wind, and their home was placed in a paradisal region in the far north, 'beyond the north wind.' They lived for 1,000 years; if any desired to shorten that period, he decked himself with garlands and threw himself from a rock into the sea.

The extraordinary discovery of the world's oldest pyramids on the Kola Peninsula indicates the existence of the legendary Hyperborea. The Kola Peninsula has recently become a fascinating place for scientific researchers and enthusiasts.

Many of the scientists who made a scientific expedition to this enigmatic place believe that the Kola Peninsula may be the ancestral home to Earth's most ancient civilization.

The photo below shows the "pyramids" of the Kola Peninsula photographed on the 2007 expedition. Views from additional angles are included in the ancientpages.com article. Filming was done for a television program titled, "Гиперборея. Прародина человечества" (2008), which translates to, "Hyperborea. Ancestral home of mankind" (on YouTube in Russian: part one and part two). Scenes that show the "pyramids" can be found at the 4:57 mark in part two.

It is possible that some of the researchers from several fields who were part of the 2007 expedition may have been predisposed to seeking or finding ancient evidence of a Hyperborean civilization, and may hold unconventional beliefs.

A spokesperson for the Pulkovo Observatory, Sergey Smirnov, believes a few generations of earthlings were born on Mars. Valery Chudinov, a professor at the Russian Academy of Natural Sciences, is an expert in deciphering Slavic inscriptions -- which he finds in artworks or on rocks. But he claims to have also found Slavic writing on meteorites, the surface of Mars and even the Sun.

Lidia Ivanovna Efimova is a part of the creative development studio Ariadna, which was a large part of the 2007 expedition and carried the studio flag to the Kola Peninsula site. The Ariadna website is linked to yperboreia.org, which was promoting the formation of the "Northern Tradition" movement and conducting tours years before the "pyramids" were discovered.

Valery Nikitich Demin, a scientist and member of the Northern Tradition movement, explored the Kola Peninsula in 1997. He died suddenly in 2006 after returning from an expedition. In a 2003 article on yperboreia.org, Demin concluded with this:

Hyperborea was, is and will be! Russia forever remains Hyperborean! We, the Russians, are the direct heirs of the most ancient forefathers and the God-chosen guardians of the immortal traditions of world history and culture!

After the TV program was broadcast on January 31, 2008, and some articles were published on the internet, Chudinov published a rebuttal on his own website (archived here) along with more photographs of the site. On April 28, 2008, he wrote:

In the last few months, a number of articles have been published on the Internet containing some provisions that I, as a member of the 2007 expedition to the Kola Peninsula, were not aware of. They create some ambiguities, a kind of fog around the 'pyramids'. I would like to discuss them in order to at least partly dispel this fog.

The concept of 'pyramid' . From the very beginning of the expedition, the term 'pyramid' was not entirely clear to me, since it was only about high hills, which I wrote about in my article about them (CHUD). Nevertheless, I read the following on the Internet: ' The most ancient pyramids of the world, discovered on the Kola Peninsula, confirm the existence of the legendary Hyperborea. The Kola Peninsula has recently become a Mecca for researchers and hunters for scientific discoveries ' (MUR). Here the word 'pyramids' is given without quotation marks. Similar statements can be found in many brief publications.

For the first time, the word 'pyramids' in relation to the Kola Peninsula was said by Valery Nikitich Demin, the organizer of 9 expeditions to these places. But he spoke not about himself, but about the Barchenko expedition.

Efimova, also a member of the 2007 expedition, organizes research expeditions and exotic trips. She has returned to the site several more times. Her report of what she found, including many photos of the "pyramids" and other stone labyrinths and megaliths, can be found on studar.narod.ru. Her interpretation is that this site was an ancient near-horizon observatory. She also wrote:

After carefully examining the hills, I took the liberty of calling them pyramids.

Although many of the articles about these two "pyramids" claim that they are oriented perfectly east to west and seem to point to this as evidence that the hills are manmade, Efimova says the western pyramid in relation to the eastern pyramid is deviated to the north (On Chudinov's website it is stated that this is a deviation of 30 degrees).

Also, while the collective-spark.xyz article states that "the geologists reached an unambiguous conclusion: the heights are anthropogenic in origin; hence, they are not natural hills, but man-made pyramids ― the product of human hands," the wording in Efimova's report leaves room for other explanations:

It is highly likely that the pyramids are of anthropogenic origin and superimposed on a natural foundation.

In January 2021, a paper was published by geography and geoecology researchers at Saint Petersburg State University titled, "Arctic tourism in the Barents Sea Region: current status and boundaries of the possible." In the section on the Kola Peninsula, no specific mention is made of the "pyramids" and it seems that in the 15 years since the 2007 expedition progress has not been made in determining an archaeological explanation or significance to these hills:

On the Kola Peninsula, traces of human prehistoric development of this territory (petroglyphs, sieidis, labyrinths, megalithic monuments) and heritage monuments of later historical eras are revealed. Comprehensive interdisciplinary studies have shown the navigational purpose of prehistoric objects. Orientation of landscape and artificial objects along the East-West line allows you to define the period of the equinoxes - the boundaries of winter and summer. Orientation along the South-North line allows you to determine the noon and the beginning of the polar day and polar night. Objects of different ages show a variety of orientation technologies: by sunrise / sunset points on the horizon and by the shadow of an object (gnomon), the length of which reflects the height of the Sun above the horizon. In the labyrinths oriented along the South-North line, the scale for measuring the midday shadow is stone arcs, summer shadows fall on the first arc from the center, winter shadows reach and can cross an arc of the largest diameter. The shadow of the gnomon (stick, pole, staff, figure) helps to decipher - drawings on the rocks. These ancient tools helped the ancient people to develop the Arctic, and today they can be interesting and useful for tourists.

Lead Stories has previously written about a mountain in Antarctica that looks like a pyramid in satellite images.