Does a photo of the Artemis I mission launch show that the rocket missed its target, falling short of the moon -- perhaps dropping into the ocean? No, that's not true: The launch went as planned and the Orion spacecraft orbited Earth once en route to the moon.

This is a real photo of the launch of the uncrewed Orion spacecraft and Space Launch System (SLS) for the moon-orbiting mission, Artemis I. The mission launched from Kennedy Space Center in Florida on November 16, 2022, at 1:47 a.m. EST. The mission was designed to utilize Distant Retrograde Orbit (DRO) to travel great distances with little fuel while collecting data over six to 19 days. The SLS and Orion Spacecraft had 24 cameras on board to capture images of the moon, exterior views of the Orion spacecraft and Earth.

The launch photo in this Instagram post was originally posted on Facebook by Daryl Gilbert Photography at 3:30 a.m. on November 16, 2022. Gilbert's photo was then reworked with an arrow pointing to the moon and was partnered with a meme popular for expressing incredulity, the "Blinking White Guy." The mocked-up meme was posted on Instagram on November 18, 2022. The caption includes 28 hashtags. It reads: 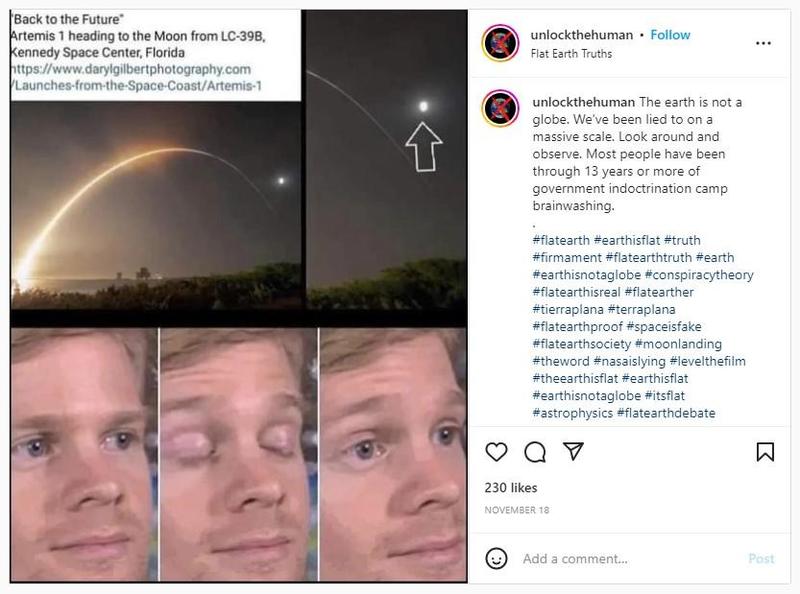 The Artemis I mission was never supposed to send the Orion spacecraft on a visual straight line to the moon, as the Instagram post implies. The graphic below from an August 27, 2022, press kit from the European Space Agency (ESA) shows the path it was projected to travel. There are many variables that go into calculating the route, including the exact minute of the launch, so it was not possible to know the precise path with certainty until the mission began. 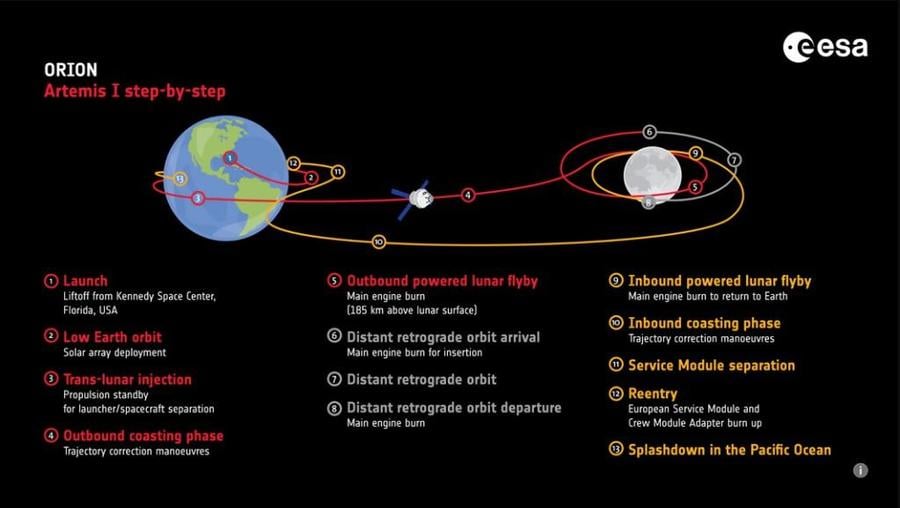 DRO is part of the reason the rocket trail in the photo is not heading moonward -- because it must first do a lap around Earth before heading toward the moon. A simplified explanation of DRO and the role it plays in the mission can be found in an April 18, 2022, article from NASA.gov titled, "Orion Will Go the Distance in Retrograde Orbit During Artemis I":

DRO is highly stable because of its interactions with two points of the planet-moon system where objects tend to stay put, balanced between the gravitational pull of two large masses - in this case the Earth and Moon - which allows a spacecraft to reduce fuel consumption and remain in position while traveling around the Moon.

After the spacecraft gets its big push toward the Moon from the SLS rocket's upper stage engine, Orion's service module, built by ESA (European Space Agency), will provide the propulsion to get to DRO. Using the DRO for Artemis I requires the use of four major targeting navigational burns - two close and two far away from the Moon - to enter and exit the orbit. Orion will fly to its closest lunar approach about 60 miles above the surface of the Moon, then rely on the Moon's gravitational force together with a propulsive burn - known as the outbound powered flyby - to direct the spacecraft toward DRO where Orion performs a second propulsive burn to enter DRO and stabilize in the orbit.

'Orion will spend about 6 to 19 days in DRO to collect data and allow mission controllers to assess the performance of the spacecraft,' said Nujoud Merancy, chief of the Exploration Mission Planning Office at NASA's Johnson Space Center in Houston. 'The exact duration of Orion's stay in DRO is determined by when it launches due to orbital mechanics.'

On the day of the launch, NASA posted a video to Twitter showing the view from the spacecraft of planet Earth, an oblate spheroid, partially illuminated by the sun. The Earth is not flat, but it is not a perfect sphere either. Technically it is an oblate spheroid, like a sphere that has been ever so slightly squashed. The planet is slightly flattened at the poles and wider at the equator.

As @NASA_Orion begins the #Artemis I mission to the Moon, the spacecraft captured these stunning views of our home planet. pic.twitter.com/Pzk3PDt7sd

Lead Stories has debunked numerous flat Earth claims in the past. These article can be seen here.