Has California perfected ballot harvesting? No, that's not true: California Secretary of State Communications Director Joe Kocurek told Lead Stories that the multiple claims about ballots in a social media post are false. Political parties do not send out ballots in California. All ballots must be postmarked by Election Day, not three days later, and voters are asked to provide identification when they register to vote.

If you want to know how ballot harvesting works with mail in-voting.

Democrats have an unlimited number of ballots to put in as needed to win close races. 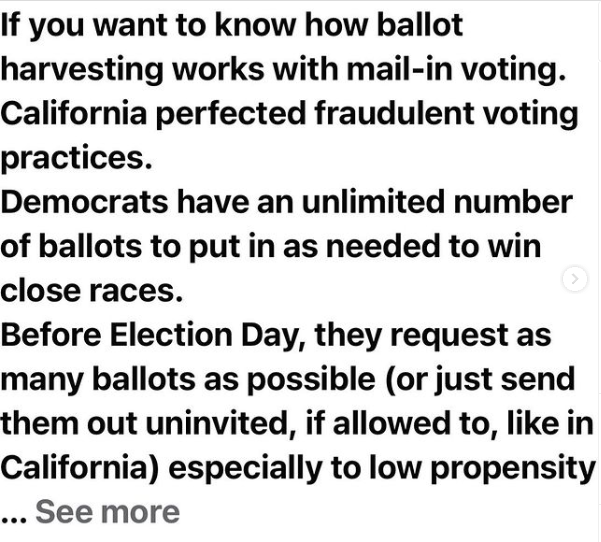 Before election day, they request as many ballots as possible (or just send them out on uninvited, if allowed to, like in California) especially to low propensity.

Then after election day on close races, they have three days to fill out the needed number of ballots and they easily backdate the postmark and voilà, legit ballots overwhelmingly Democrat.

It's really that simple. We know this from how California currently works (no voter ID, ability for strangers to turn in others ballots) and had modeled for the rest of the nation in 2018. Orange County was Ground Zero for this.

The caption notes that this claim was made in the 2020 election as well. Social media posts dating back to then shared the same thing here.

The post made several false claims about voting using California as an example. We will break each one down:

"Democrats have an unlimited number of ballots to put in as needed to win close races."

Kocurek told Lead Stories via telephone on November 7, 2022, that ballots are not sent out by political parties in California:

No, the parties have no effect on the distribution of ballots. The counties are the ones who actually mail the ballots out based on registration. No party, libertarian, democrat, republican, green, peace and freedom, nobody else has ballots to distribute to voters.

"... after election day on close races, they have three days to fill out the needed number of ballots and they easily backdate the postmark and voilà, legit ballots overwhelmingly Democrat."

That is false, Kocurek said.

The California Secretary of State website details how and when ballots may be returned:

You may return your voted ballot by mailing it to your county elections official;

Vote-by-mail ballots that are mailed must be postmarked on or before Election Day and received by your county elections office no later than 7 days after Election Day.
If you are not sure your vote-by-mail ballot will arrive in time if mailed, bring it to any polling place in the state between 7:00 a.m. and 8:00 p.m. on Election Day.

"We know this from how California currently works (no voter ID, ability for strangers to turn in others ballots)"

This is partially false, Kocurek said. "You do not need [ID] at the polls. We do have a voter registration or verification system where we verify through other existing records, but you don't have to present an ID at the polls," he said.

The California Secretary of State website explains what is needed to register to vote for the first time in California:

When you registered to vote, you were asked to fill in your driver license number, California identification number, or the last four digits of your Social Security number. If you are a first-time voter in a federal election and did not include this information when you registered, send a photocopy of some personal identification to your county elections official before the election.

Ability for strangers to turn in others ballots

In California a person may designate another person to turn in their ballot:

Authorizing someone to return the ballot on your behalf.
Anyone may return your ballot for you, as long as they do not get paid on a per ballot basis. In order for your ballot to be counted, you must fill out the authorization section found on the outside of your ballot envelope.

We don't encourage strangers. You should know the person that you're turning your ballot over to. But there is a spot on there for you if you're letting somebody else return your ballot. You put in the person's name on there and they have their signature on there and you date it and basically it's you allowing them to do that.