Was David Icke labeled a "level three terrorist" in an email he received from the Dutch government? No, that's not true: Dutch immigration authorities wrote Icke, a British conspiracy theorist and former soccer player, to inform him that he is banned for two years from traveling into countries that make up the European Union's border-free Schengen Area. The letter does not label Icke as a terrorist. It mentions terrorism only when quoting an Amsterdam police report and when referencing a Dutch government report about the general threat level in the Netherlands.

Received an email from the Dutch. My dad, David Icke, has been banned from entering the EU for two years. They claim he is a "level three terrorist".

Gareth Icke uploaded to his Telegram channel the letter to his father along with an overall terror-threat assessment from the Dutch Ministry of Justice and Security. 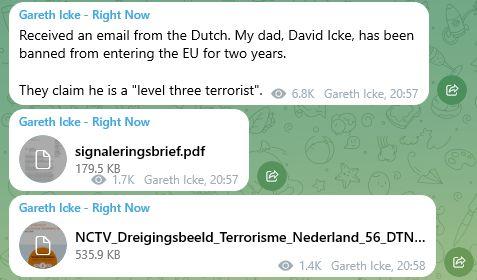 The "signaleringsbrief" document is the letter Icke received to inform him he is not allowed to travel to countries in the Schengen Area because of concerns it would constitute a risk to public order in the Netherlands.

It mentions "terror" in two places ( in the words "terroristische" and "Terrorisme"):

A Google translation of these sections reads:

The British [citizen] David Icke has been internationally known for years as a propagator of conspiracy theories. Among other things, he claims that the world is ruled by so-called reptiles, which are a group of powerful aliens that pretend to be humans. According to critics, the reptiles are a metaphor for a (partly Jewish) elite that forms an all-powerful secret world government and is active in all ranks of society. He claims that the Jews financed Hitler and that the Jews are responsible for organizing the 2008 financial crisis and the terrorist attacks on September 11.

The 56th Terrorism Threat Assessment Netherlands of 21 April 2022 describes a movement in the Netherlands that is fed by uncompromising conspiracy theories in which prominent persons, administrators and officials are dehumanized and democratic principles are rejected. For example[,] online, through descriptions such as "reptiles", "blood-drinking pedophiles", "enemies of freedom" and "defenders of dictatorship". This movement argues that there is an elite in power in the Netherlands who implement an oppressive agenda, which is at war and against which resistance is necessary. The movement is characterized by deep hostility, fanaticism and fantasies of violent vigilance; the elite would ultimately have to answer to tribunals.

Nether of these sections labels David Icke as a terrorist.

The document referenced in the letter's second excerpt ("The 56th Terrorism Threat Assessment Netherlands of 21 April 2022") is the second PDF Gareth Icke uploaded to Telegram. This document, titled "Dreigingsbeeld Terrorisme Nederland 56" in the original Dutch, is dated April 2022. It is the 56th in a series of monthly reports by the Dutch National Coordinator for Counterterrorism and Security (NCTV) that indicate the current threat level for the Netherlands as a whole. It is similar to the National Terrorism Advisory System from the Department of Homeland Security in the United States.

On the cover page of the report, a graphic puts the threat level in April 2022 at "3 - Aanzienlijk" ("3 - Considerable"). It has been at this level since December 2019, according to the NCTV website (archived here). 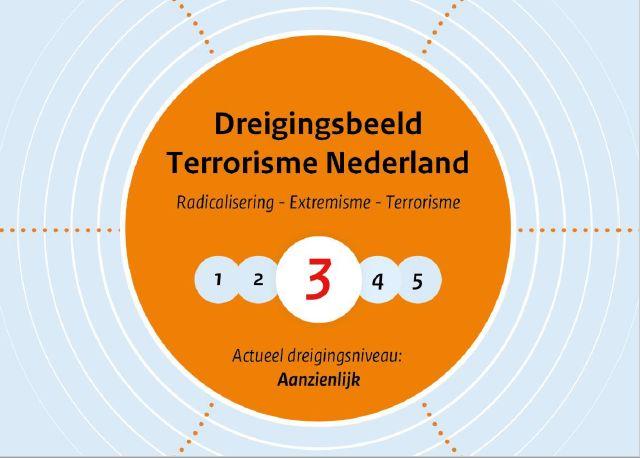 It is possible the report's cover page confused Icke or his son, who took it as some kind of personal designation, instead of an assessment of the general threat level for the country as a whole.

Lead Stories got in touch with Gareth Icke for comment through the contact form on his website. In response to our question he re-sent the document mentioned above, which does not say or claim David Icke is a "level three terrorist" anywhere.