Was billionaire Elon Musk killed in a rocket testing mishap at his space exploration company, SpaceX? No, that's not true: Musk has been active on his verified Twitter account since the claim was published and news organizations were not carrying reports of his untimely demise.

BREAKING: Twitter owner & Tesla CEO, #ElonMusk dies in a Nuclear accident during #SpaceX rocket testing.
#NASA's rocket engineers will be looking into what exactly happened in order for the explosion to be caused in the first place.
Rest in Peace, Elon Musk... 🕊️

Here is how the post looked at the time of writing: 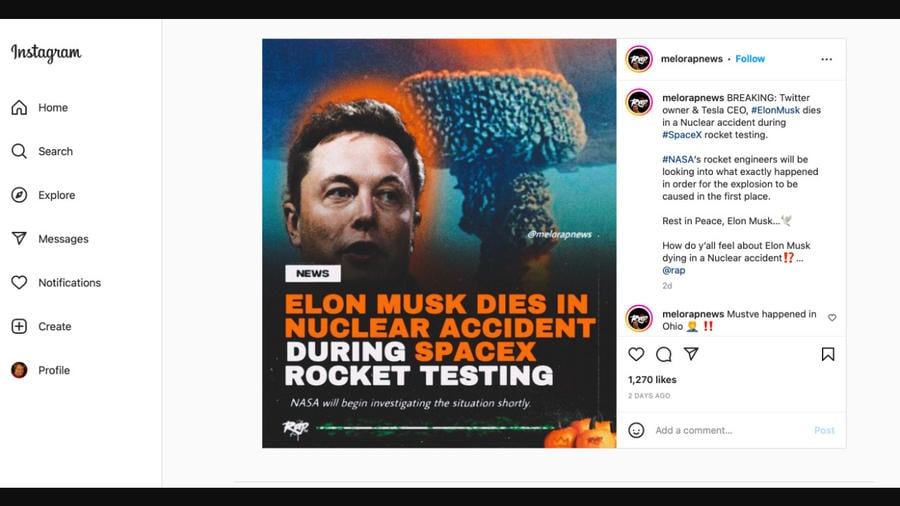 The post comes from a user who regularly publishes sensationalist headlines dressed up as real news on Instagram and TikTok. An Instagram post on October 16, 2022, declared "JOE BIDEN DISMISSED AS PRESIDENT AFTER 652GB OF CHILD P*RN FOUND IN HARD DRIVE," while an October 9, 2022, post claimed "EVERY MCDONALD'S SHUT DOWN AFTER HUMAN GENITALS FOUND IN NUGGETS." The user's Instagram profile features a disclaimer saying that the posts are intended as parody.

Still, some Instagram users appeared to take the news of Musk's death seriously. One person commented "At least he died doing what he loved to do," while another said "dude died on takeoff."

On the day the Instagram claim appeared, Musk was still alive and using his account at Twitter, the social media company he had just acquired on October 27, 2022, for $44 billion. A Google search for "Elon Musk killed" did not turn up any results from any reputable news organization. The only recent search results for "SpaceX Rocket Test accident" concern an employee who suffered a fractured skull in an accident that occurred while checking pneumatic pressure on a space vehicle's engine.

Lead Stories has asked SpaceX's press department for comment and will update the story if they reply.