Does a "bunch of bags" randomly arriving at the Maricopa County, Arizona, counting center prove that election fraud occurred there? No, that's not true: The black canvas bags in the image are used to transport voted ballots and results from vote centers on Election Day. The bags are heavily secured and under constant surveillance by members of both the Democratic and Republican parties. It is standard operating procedure for the bags to be in the ballot tabulation center where ballots cast are reconciled against check-ins.

This is from the live feed from Maricopa County a few minutes ago. A bunch of bags just randomly arrived at the counting center... 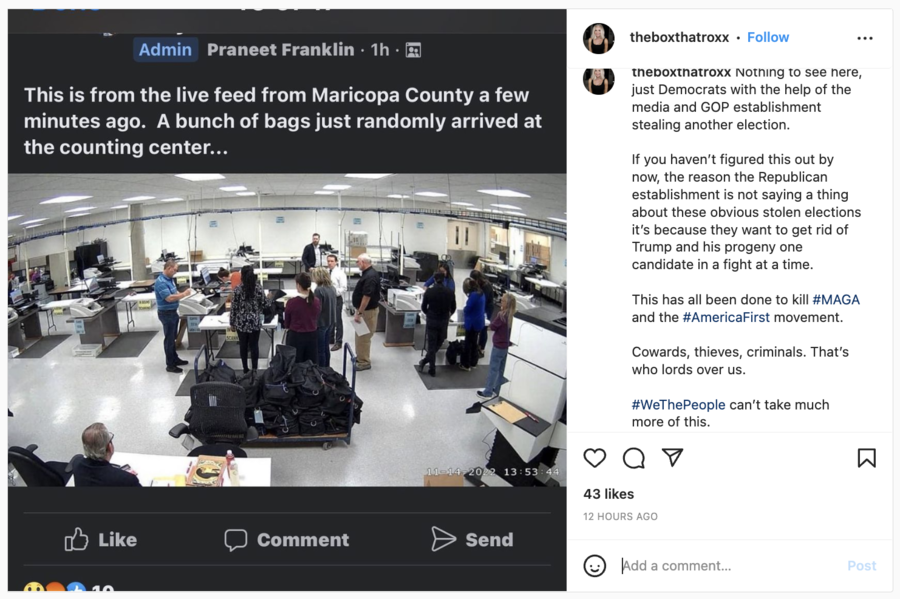 The image appears to be a screenshot of the Maricopa County election office with a cart holding several black bags. According to the timestamp on the image, it was taken on November 14, 2022, at 13:53:44.

"The black canvas bags referenced in the image are used to transport voted ballots and results reports from the Vote Centers after the polls close on Election Day," Maricopa County spokesperson Megan Gilbertson told Lead Stories via email on November 17, 2022:

Bags are sealed with a tamper evident seal for security, logged on a chain of custody form, and returned to the Elections Department by two poll workers of differing parties. When the black canvas bags are opened, it's done under 24/7 live stream cameras and with political party observers present.

Gilbertson said it was common for the bags to be in the tabulation center as workers complete the reconciliation of ballots cast against check-ins. The Maricopa County Elections Department posted a tweet on November 16, 2022, with an image of staff at the center with black bags that look like the bags in the Instagram post:

Today in Tabulation: staff is completing a reconciliation of ballots cast against check ins. It will be on our live stream and political party observers are present. This routine process happens every election to ensure only legal ballots are counted. pic.twitter.com/bVd4zQRNhU

Additional Lead Stories fact checks of claims related to Arizona's Maricopa County during the 2022 elections can be found here.