Did Russian ex-president and the deputy chair of Russia's Security Council, Dmitry Medvedev, tweet that Moscow "is ready to supply Poland with the best air defence systems to prevent further aggression from Ukraine"? No, that's not true: archived versions of his Twitter accounts do not show a tweet like that.

The entry contained a picture of what appeared to be a screenshot of his tweet:

Russia is ready to supply Poland with the best air defence systems to prevent further agression from Ukraine. 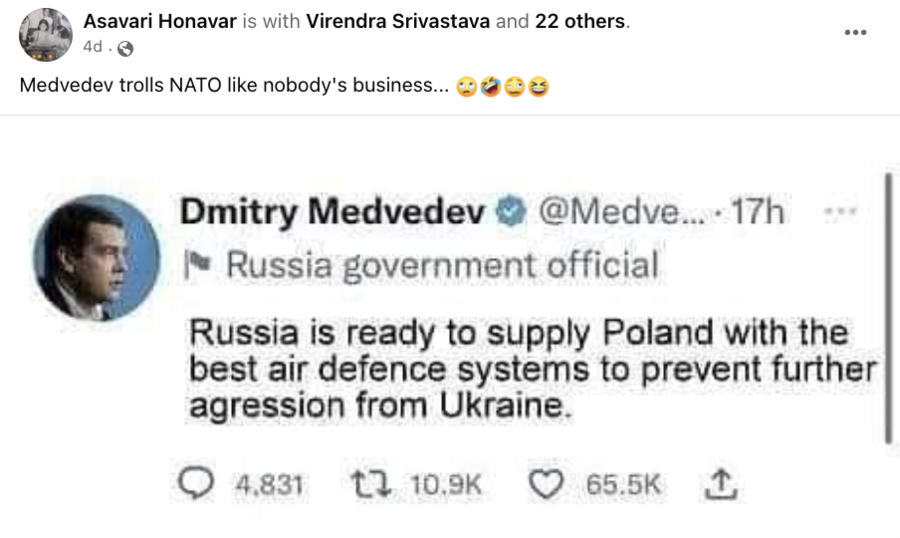 However, an archived version of Medvedev's English-language Twitter account shows no such entry in the period between the November 15, 2022, missile incident in Poland it is responding to and the time the screenshot started making the rounds.

An archived version of his Russian-language account doesn't contain any tweets like this on these dates either. (Lead Stories Russian-speaking staff confirmed that it did not contain such a tweet.)

The rumor about the alleged offer to supply Poland with "air defence systems" started circulating in the aftermath of the November 15, 2022, missile incident in Poland. At first, it was unclear who was responsible for it, but later official statements from the Polish president and the White House clarified that it was a Ukrainian air defense missile that accidentally landed in a Polish village.

The claim appeared earlier in several Russian-language articles and posts (here, here, here and here). However, they did not provide either a screenshot or the link to the original supposedly existing tweet.

The quote wasn't reported by major Russian state-run media sources either. The website of TASS, a Russian state-owned news agency, showed no reports about Medvedev making this or any similar statements. Even RT, a government-controlled broadcast network, said nothing about it.