Does a publicly available 911 recording feature the voice of Paul Pelosi identifying the man in his house as David and stating that he is a friend? No, that's not true: At the time of writing, the recording of the actual 911 call has not been made public. An audio recording of a police radio transmission that is publicly available features language that led to misinterpretations -- that it was Pelosi who called David DePape a friend. The unreleased call with the San Francisco Police 911 dispatcher Heather Grives is detailed in a November 1, 2022, court filing.

During Pelosi's communication, with the phone on speaker and DePape standing just three feet away, it was possible for DePape to interject his own replies directly to the dispatcher. According to the court filing, it was DePape who stated that his name is David. When the dispatcher then asked who David is, Pelosi said, "I don't know." DePape then replied, "I'm a friend of theirs."

As details of what happened first came to light, unclear and incomplete reports surfaced. Some were derived from actual recordings of police radio transmissions at 2:28:08 Pacific Time on October 28, 2022, pertaining to the call from Pelosi's house. In some cases the recordings are characterized as 911 recordings and give the impression that Paul Pelosi, husband of House Speaker Nancy Pelosi, can be heard speaking. One example was posted on Instagram by the @pilsners_and_politics podcast on November 1, 2022. It was captioned:

'His name is David, and he's a friend.'
@PILSNERS_AND_POLITICS 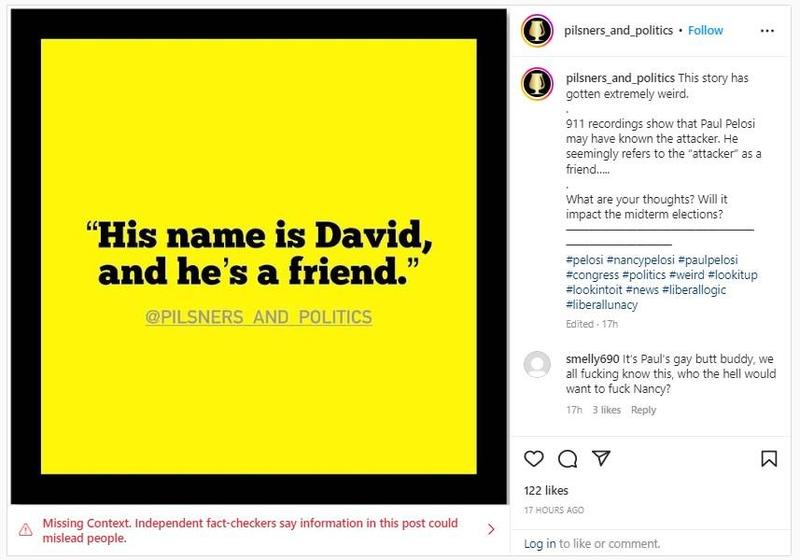 Timestamped logs of police radio transmissions from San Francisco can be accessed on the website openmhz.com. The 12-second clip (archived here) can be heard by clicking the autoplay button at the bottom of the screen. Due to time zone differences, this archived timestamp shows 5:28:08 Eastern time rather than 2:28:08 Pacific time. The audio can also be heard in a recording posted in an October 28, 2022, Twitter post. Although using different technology than a police scanner, trunk recording is similar in that these are radio calls between police officers and the dispatcher. The radio transcript of a male voice says:

RP [reporting person] stated there's a male in the home and that he's going to wait for his wife. RP stated that he doesn't know who the male is but he advised that his name is David and that he is a friend. RP sounded somewhat confused.

In the radio transmission, the structure of this sentence leaves ambiguity as to who "he" is. Was it Pelosi or DePape who advised that his name is David and that he is a friend?

A motion to detain was filed with the San Francisco County Superior Court on November 1, 2022. A description of the 911 call appears on page 5, line 8 - page 6, line 7. The details of the call clarify this question as well as how someone could think Pelosi sounded confused. Below is an example of a mixed message Pelosi offered to the 911 dispatcher under duress:

The document clarifies that it was DePape who said his name was David and claimed to be a friend. The moment in question occurs just before the call ended: