Does a trident superimposed on the gold and blue Ukrainian flag represent membership in, or support for, the Nazi political movement? No, that's not true: The trident is the national symbol of Ukraine that is often added to the country's flag.

The claim appeared in an Instagram post from November 25, 2022, under the title "Here I am driving to work. And what do I spot??? A NAZI WHO LOOKED LIKE AN AGENT On our soil ... those of you who know what that symbol is. AZOV NAZIS". The post contained a video taken from a vehicle following another vehicle, with the video zooming in on a bumper sticker on the lead vehicle as a female voice says: 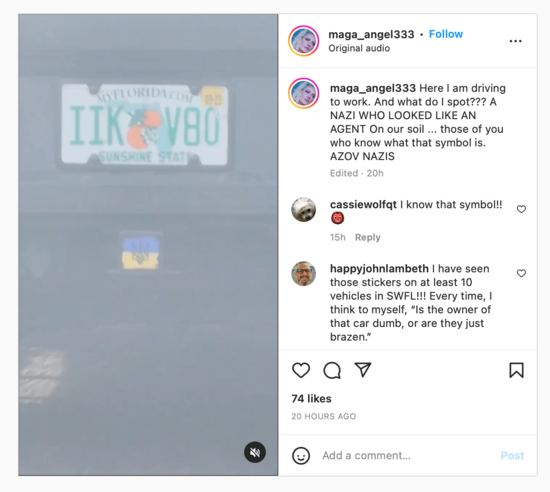 Because the post is shaded by a gray screen, the details of the image's trident is a bit difficult to see. Lead Stories made a composite image from a close-up of the post's image and a clear depiction of the Ukrainian flag from a Ukraine travel site to compare the symbols, and found the tridents accurately match.

Here is the composite image comparison:

Regardless, the post's claim that the trident is a symbol of Nazism is false and misleading, reporting by Lead Stories found.

The history of the trident --or in Ukrainian, тризуб -- dates back to the 10th Century as the ancestral sign of the Rurik dynasty, which reigned over the Kyvian Rus period. Archeologists have found the symbol on brickwork, coins, murals and seals, as an ideogram of power, according to Ukraine Now, an official website of Ukraine's Ministry of Foreign Affairs and the Ukrainian Institute.

After the fall of the Russian empire in 1918, the trident was adopted as a symbol of independence and became the Coat of Arms of the Ukrainian People's Republic.

In 1992, with the dissolution of the Soviet Union, of which Ukraine had been a part, the Ukrainian parliament made the trident one of three official national symbols. It was then enshrined in the Ukrainian Constitution in 1996, and today represents state independence and unity that "honors those who fought for independence more than 100 years ago" and those who continue to fight to maintain that freedom.

Reporting by Lead Stories found that the term "Azov" is used as a shorthand reference to a far-right Ukrainian militia group whose members have long been said to be neo-Nazis. Experts from Stanford University's Mapping Militants team at the Center for International Security and Cooperation say the group is one arm of the para-military and political organization known as the Azov Movement.

A Lead Stories search for the term "Azov Nazi" found hundreds of thousands of internet references to the group, which is known as the Azov Regiment or Azov Battalion. Below is a partial list of items found in Google by using that term. 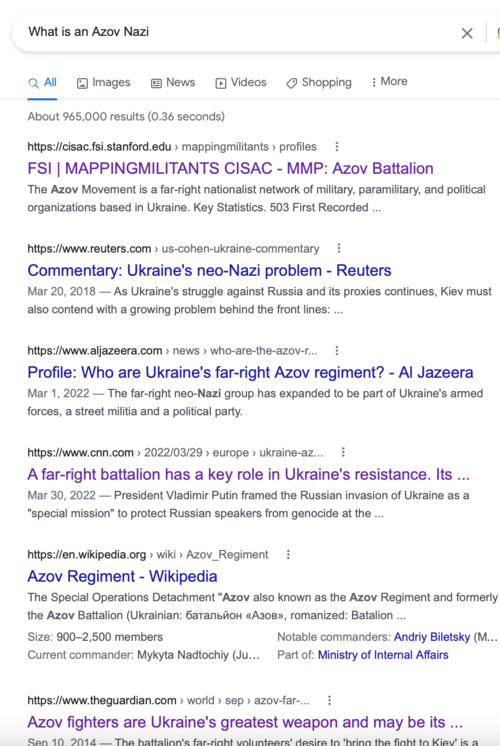 Founded in the city of Mariupol on the Sea of Azov, the paramilitary group was formed in 2014 during Ukraine's armed conflict with Russia over the annexation of Crimea. Originally founded as a volunteer battalion, the group was later integrated into the Ukrainian National Guard as a special forces regiment. In 2022, the group has risen to prominence for fighting against Russian soldiers in the Azov Region.

Multiple news agencies (here, here, and here), have reported that the regiment's ranks include neo-Nazis. Experts from Ukraine's Center for Civil Liberties, however, report that the group's current membership is far different in 2022 than it was at its founding.

An official statement from the battalion also pushed back against such neo-Nazi membership claims following a January 7, 2021, article in Time magazine which dubbed the group a "white-supremacist militia" that was using social media to radicalize members. The statement read:

"We have repeatedly emphasized that the Azov Regiment is a structural unit of the National Guard of Ukraine, subordinated to the Ministry of Internal Affairs and in some cases to the General Staff; its activity is regulated by the Constitution of Ukraine and appropriate normative acts. Such a slander as accusation in terrorism cannot be taken seriously by thinking persons. After all, the unit was created precisely to fight Russian terrorism, which the Azov Regiment has been performing since 2014. Getting the unit involved in political clashes and publishing an outright lie about Azov is unacceptable and will tarnish the memory of the fighters who laid down their lives for Ukraine in the ranks of our regiment."