Do people in Belgium honor King Leopold II by making chocolates and cookies in the form of human hands, representing the severed limbs of Congolese people and children who were brutally punished or killed in the colonial era for not meeting a quota for rubber production? No, that's not true: The sweets called Antwerp Handjes were first introduced in 1934 after a competition was held by the Antwerp Master Confectioners. The hand shape of the pastry represents a city symbol springing from a legend about the Gallo-Roman founding and naming of the city of Antwerp. The motif of hands also appears in the Antwerp municipal and regional coat of arms as far back as 1249, predating Leopold's reign by hundreds of years.

There have been online criticisms of the candy "Handjes" offered in a graphic side-by-side comparison with real historic photos of Congolese people missing limbs. A March 28, 2021, post on Twitter by @Africa_Archives made the comparison, calling it "diabolical." A few days later, Bart De Wever, the mayor of Antwerp, responded with a March 31, 2021, post on Facebook that was referenced in an April 1, 2021, article in The Brussels Times, emphasizing the history of the city of Antwerp and the 20th-century story of the original Handjes pastries developed in 1934 by a Jewish baker, Jos Hakker. Posts repeating the caption from the @Africa_Archives tweet resurfaced on Facebook. One example was posted by Africa Daily Magazine on November 29, 2022. It was captioned:

Some of the crimes that were committed by Belgium during colonialism and slavery in Africa.
Belgium colonialists used to cut off your hand or your child's hand if you didn't fill your quota for the day in Democratic Republic of the Congo. They sell 'chocolate hand' candies today. If you don't think that's absolutely diabolical then i don't know what to tell you. 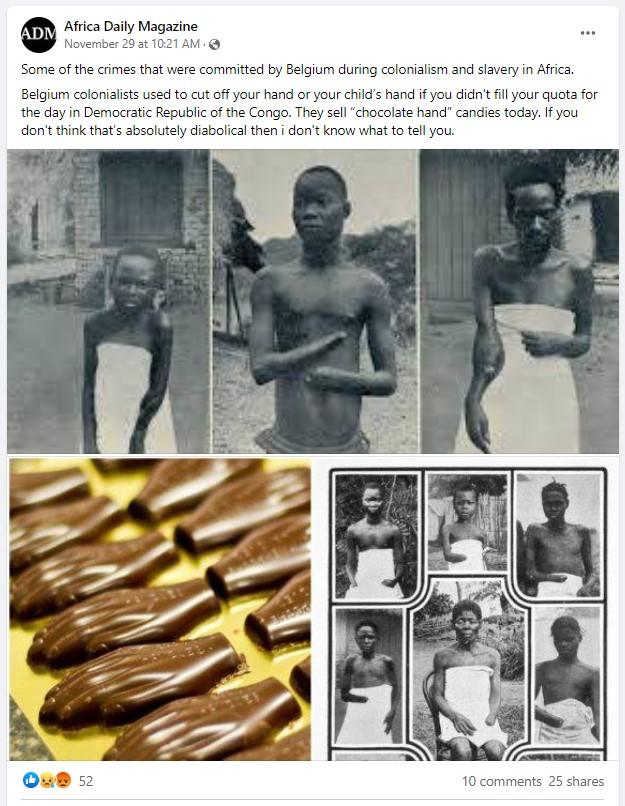 That there were atrocities committed under King Leopold II is not in question. This fact check is focused on the claim that the hand-shaped chocolates and pastries called "Antwerp Handjes" represent the hands of African children and are a way to celebrate or commemorate the atrocities of Leopold II.

The shape of the cookies has to do with the legend of Antwerp's founding -- and nothing to do with the atrocities, genocide and brutal forced labor in Leopold's personal colony, the Congo Free State.

The origin of the name Antwerp

There are several theories on the etymology of the city's name. A modern academic explanation is from Alfred Michiels, who wrote a book in 2007, "Andouerpis Antwerpen," in the Dutch language. Michiels makes cases against some of the other theories of the origin of the name and cites an early 8th-century Latin text, "Vita Eligii," and a Merovingian coin with the spelling "Anderpus" to conclude that the name has a Celtic origin that refers to the inhabitants on either side of the river Scheldt, "those who live on both shores."

Alternative theories suggest "aan de werf" meaning "at the wharf." The entry for Antwerp in Encyclopedia Britannica mentions two theories, a Germanic prefix "anda" (against) combined with a noun derived from the word for throw, "werpen" suggestive of a fortified castle, and finally, the most popular explanation -- which is accepted as a legend -- is that Antwerp gets its name for the Dutch words "hand werpen" or "hand throw." The legend of Silvius Brabo is told in the Journal of Hand and Microsurgery.

Summary of the legend of Brabo

A giant, Druon Antigoon, had been exacting a toll for passage on and across the river Scheldt and been cutting off the hands of the sailors who could not pay. The hero, Silvius Brabo, a mythical Roman soldier and the cousin of Julius Caesar, needed to pass through the area guarded by the giant and decided that he would put an end to this tyrant.

A gory battle ensued. Brabo chopped off the right hand of the giant and then cut off his head. Before leaving, Brabo picked up the giant's hand and threw it in the river, declaring that it would mark the new expanded boundary of his territory Brabant. Julius Caesar, then in Britain, gave the directive to Brabo to build a city on that site.

The center panel in the composite image above shows the Antwerp City Hall, which was built in 1565, partially burned in 1576 and rebuilt in 1579. In this engraving in an atlas by Frederick de Wit it is depicted at the time of 1699 to 1706.

Until 1586 the central figure on the exterior facade of the city hall was the legendary Brabo, but this was replaced with a statue of Mary, as can be seen today.

Today a fountain (left panel above) stands in the Grote Markt square in front of the city hall. The sculpture of Brabo stands preparing to throw the hand of the decapitated giant, who is depicted dead at the base (not pictured). This fountain was designed by Jef Lambeaux in 1887.

On the facade of the city hall, (marked in blue above) next to a statue of Lady Prudentia, is the coat of arms of Antwerp featuring a walled fortress and the motif of two hands (details showing variations of the hand motif in the coat of arms on the right).

The pastry traditions of Antwerp

Antwerp has the nickname "Cookie City" or "Koekenstad" because of the cookie and chocolate factories established there in the 19th century. There is even a 2-week-long annual festival celebrating the chocolates and biscuits of "Koekenstad."

The famous hand-shaped biscuits from Antwerp, called Handjes, were a baked cookie with slivered almonds invented for a 1934 competition of the Antwerp Master Confectioners. The competition was won by the Jewish-Dutch baker who had initially conceived of the contest, Jos Hakker.

During World War II the Handjes were not produced, only to be reintroduced in 1956. Solid chocolate hands were not introduced until 1971; later versions include dark, white and milk chocolates and fillings such as praline, coffee, marzipan and the Antwerp liqueur Elixir d'Anvers.

A short history of the Hakker family during WWII is included in an article titled, "Antwerp Hand biscuits, Brabo and the Holocaust" on the website of the Museum aan de Stroom (MAS). In 1943 Jos Hakker was one of 67 people who managed to escape by jumping from a train carrying 1,623 people bound for Auschwitz-Birkenau. After the war's end in 1945, members of the Hakker family returned to Antwerp, and Jos Hakker was able to reopen his bakery. 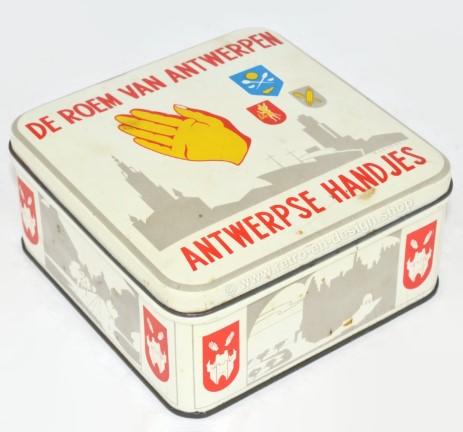 The narrator of the video asserts that Hitler only went down in history as the worst person because he killed white people, when there were other people who committed worse atrocities in Africa, such as King Leopold of Belgium. She describes children having their hands cut off for not collecting enough rubber and said photos of these children were turned into postcards to send to Belgium and that the people in Belgium would celebrate these acts by making chocolates that imitate the chopped parts of African kids. The chocolates would be sold in Belgian supermarkets in honor of King Leopold. The video was captioned: 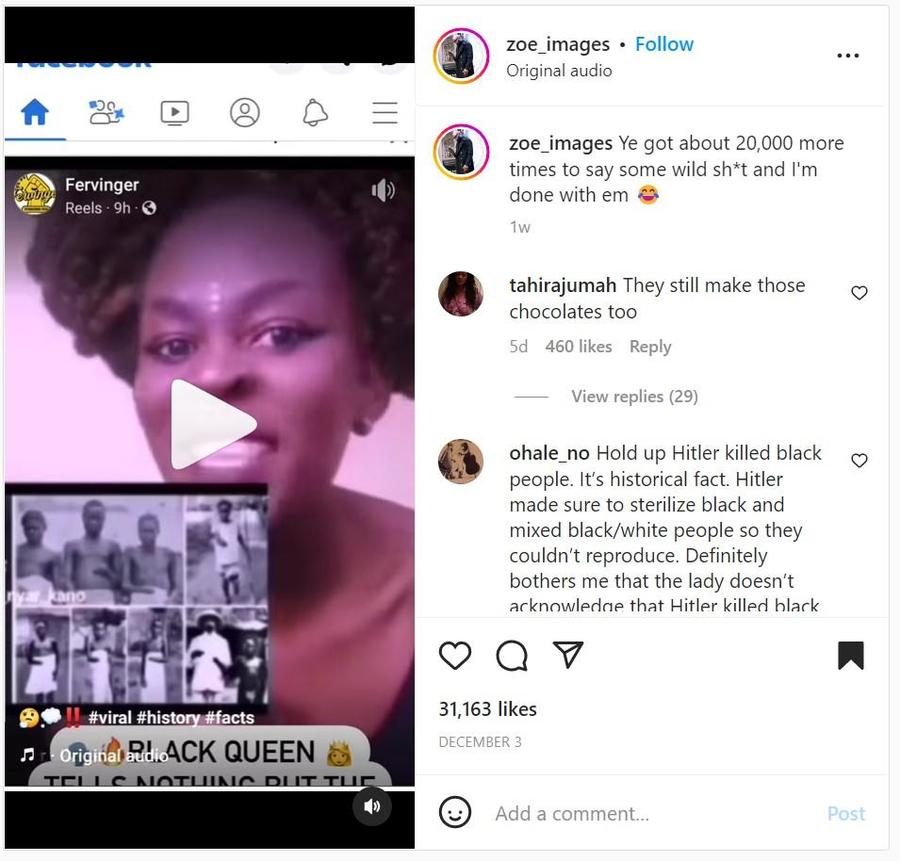