Does a sudden decrease in the displayed vote tally for U.S. Senate candidate Herschel Walker during Fox News coverage of Georgia's December 6, 2022, runoff election prove that voter fraud occurred? No, that's not true: Human error by the Associated Press (AP), the news organization that provides voting data for multiple networks, including Fox News, was responsible for the change in Walker's numbers, AP's vice president for communications told Lead Stories. The changing numbers reflected updates to numerous erroneous numbers displayed during the live broadcast.

The claim appeared on Facebook on December 8, 2022. Its caption read:

Watch Walker's numbers go down in the blink of an eye. Seriously ... if you blink, you might miss it. 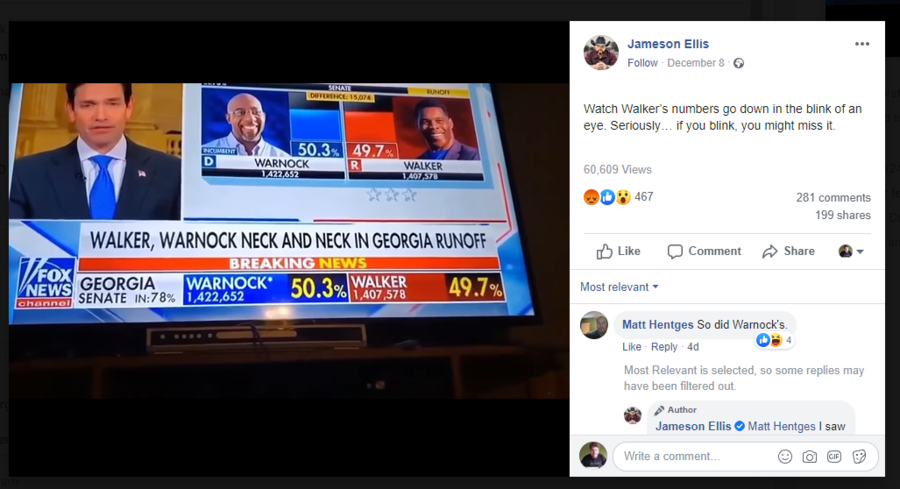 "Human error caused us to briefly provide incorrect, overstated numbers for less than a minute on Tuesday night," Lauren Easton, vice president of corporate communications for the AP, told Lead Stories via email on December 13, 2022. "As soon as we saw the mistake, we quickly returned to providing the numbers reported by the state."

The AP provides election services in the U.S., as this archived version of their website shows.

A longer version of the video from the night of the Walker-Warnock runoff can be found on YouTube. Beginning at 2:11 in the video, the same footage can be seen as in the clip on Facebook. At 2:41 and 3:08 in the video, the numbers change again.

As TV broadcasts of his speech show, Walker did not allege vote fraud when he conceded the race to Warnock on December 6, 2022.