Was "even the media" prosecuted during the 1945-46 Nuremberg trials of Nazi Germany's leadership and "put to death for lying to the public"? No, that's not true: This claim misrepresents the purpose of these historical legal proceedings, which set a precedent for holding individuals accountable for crimes against humanity. As the archives show, even those defendants who had a history of what can be loosely described as media activities were tried for contributing to war crimes, not for "lying" or for being members of the press.

The claim appeared in a picture on Instagram on November 29, 2022. The image's text overlay said:

During the Nuremberg trials, even the media was prosecuted and put to death for lying to the public. 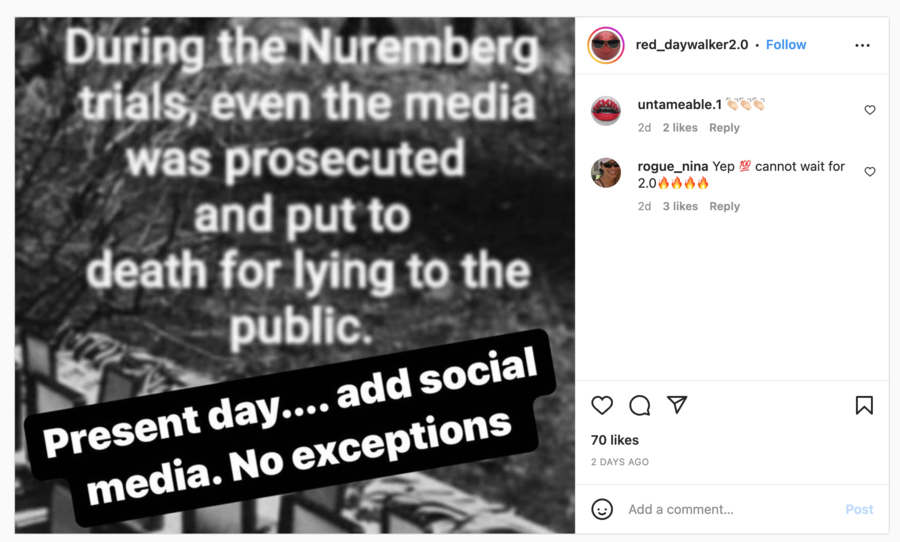 Neither the International Military Tribunal held by the Allies in Nuremberg, Germany in 1945-46, nor 12 subsequent Nuremberg trials later conducted by the U.S. military prosecuted defendants for "lying to the public."

The International Military Tribunal's October 18, 1945 indictment document charged 24 individuals with "conspiracy, crimes against peace, war crimes and crimes against humanity." As this document details, the charges were for crimes that led to a massive loss of human lives, not for the misrepresentations of facts.

The 12 subsequent Nuremberg trials prosecuted 183 "second-tier Nazis" who had been charged with the same crimes, research compiled by the United States Holocaust Memorial Museum shows.

These subsequent trials took a broader approach, addressing the involvement of representatives of different professional groups (for example, German physicians involved in "murders and torture" or large corporations that used slave labor) in such crimes. However, there was no separate case against media.

Individuals with some sort of media affiliation who were tried at the International Military Tribunal and subsequent trials were not reporters or editors -- they were linked to the Nazi Party and participated in the systemic promotion of hatred toward Jews and other groups under the Third Reich doctrine of the so-called superiority of the Aryan race.

For instance, Julius Streicher, who published the antisemitic newspaper Der Stürmer, was not only a member of the Nazi Party, but one of its regional leaders. The case files show that he was sentenced to death by the International Military Tribunal for inciting genocide, not for "lying":

In his speeches and articles, week after week, month after month, he infected the German mind with the virus of anti-Semitism and incited the German people to active persecution. Each issue of 'Der Sturmer,' which reached a circulation of 600,000 in 1935, was filled with such articles, often lewd and disgusting.

Streicher had charge of the Jewish boycott of 1st April 1933. He advocated the Nuremberg Decrees of 1935. He was responsible for the demolition on 10th August 1938, of the Synagogue in Nuremberg. And on 10th November 1938, he spoke publicly in support of the Jewish pogrom which was taking place at that time.

But it was not only in Germany that this defendant advocated his doctines. As early as 1938 he began to call for annihilation of the Jewish race. Twenty-three different articles of 'Der Sturmer' between 1938 and 1941 were produced in evidence, in which the extermination 'root and branch' was preached.

Alfred Rosenberg, who edited the Nazi newspaper Völkischer Beobachter at one point, also served as Hitler's deputy for "the Supervision of the Entire Spiritual and Ideological Training" of the Nazi Party. He last served as the reichsminister for German-occupied areas of Eastern Europe and the Soviet Union; a position in which, among other crimes, he oversaw the widespread, systematic murder of Jews and the deportation and kidnapping of tens of thousands of local adults and children as slave laborers. He never faced a charge of "lying to the public." He, too, was convicted and executed for "crimes against peace," "war crimes and crimes against humanity," the judgment reads.

Additional Lead Stories fact checks of claims related to the Nuremberg trials can be found here.