Did graffiti showing Ukraine's President Volodymyr Zelenskyy eating money appear in the capital of France during November 2022? No, that's not true: Neither local authorities nor the personnel of a store located near the supposed graffiti's site saw it. Journalists sent on location did not find any signs of the graffiti. The absence of other images of the scene suggests that a single photo shared on social media was digitally altered.

The claim appeared on Instagram on November 29, 2022. It said that the graffiti appeared on November 18, 2022, and the geotag identified the location as Paris. The caption said:

Hello, France. Give me all your money. Sorry, not sorry. @zelenskiy_official 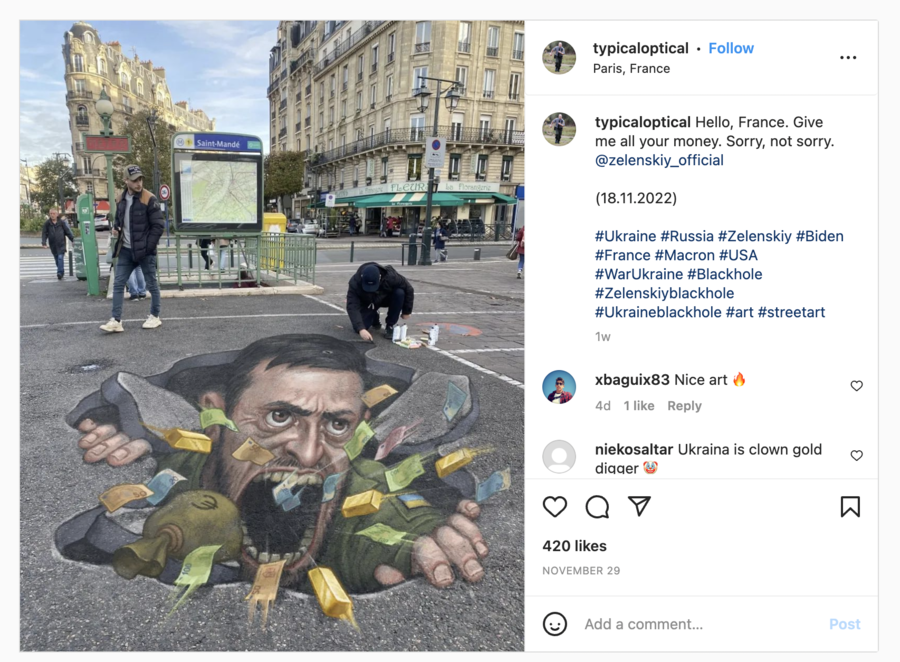 The image was shared across social media platforms and languages, even though the Instagram account that posted it has fewer than 150 followers as of this writing. The Zelenskyy graffiti picture was the account's second post to date.

Among those who amplified the image's claim was Ramon Fonseca Mora (archived here), the founder of Mossack Fonseca, a company at the center of the Panama Papers scandals that revealed controversial offshore schemes run by politicians and businesspeople, including those from the close circle of Russian President Vladimir Putin.

But pro-Kremlin Russian media were the first to promote the image (for example, here, here, here and here).

There is no evidence that such graffiti ever appeared on the streets of Paris.

Neither a reverse image search, nor a search across available images on Google, Facebook, Twitter and Instagram shows the same shot from a different angle. Had it been real, more than one social media user would have taken a snapshot.

Had the artist shown in the picture actually drawn the graffiti, some paint splatters would likely be seen on that person's clothing, but it's spotless.

The background of the picture on Instagram contained the name of the subway station where it was purportedly taken: Saint-Mandé, a Paris suburb east of the French capital.

France24 journalists went to the spot but found nothing. When they contacted the local authorities, the journalists were assured that the street art had never existed.

Myth Detector, a fact-checking organization based in the country of Georgia, also reported that one of its former employees had gone to the site and found no signs of the street graffiti there. A "representative" of a store right across from the spot, La Florangerie, commented that no one had seen such graffiti, the fact checkers said.

On November 1, 2022, the same Instagram account shared another picture of a similar piece of street art, supposedly from Warsaw, Poland. However, the Polish fact-checking team Konkret24 reported that no traces of graffiti had been found at the supposed site, either.

The theme of an allegedly massive wave of dissatisfaction in the European Union over the influx of Ukrainian refugees and the amount of EU support given to Kyiv has been a leitmotif of Russian state propaganda since February 2022, when Russia launched its full-scale invasion of Ukraine.