Did American singer-songwriter Alan Jackson pass away on December 3, 2022? No, that's not true: A representative at Jackson's office denied this claim. Neither credible news organization nor his official social media accounts have confirmed his death. Jackson has confirmed that he's been diagnosed with Charcot-Marie-Tooth disease, a form of muscular dystrophy, but this not life-threatening.

The claim appeared on the website thedailynews24hr.com (archived here) on December 3, 2022. The headline read:

6 minutes ago/ with a heavy heart as we report the sad news of 64-year-old Singer Alan Jackson.

This is what the page looked like at the time of writing: 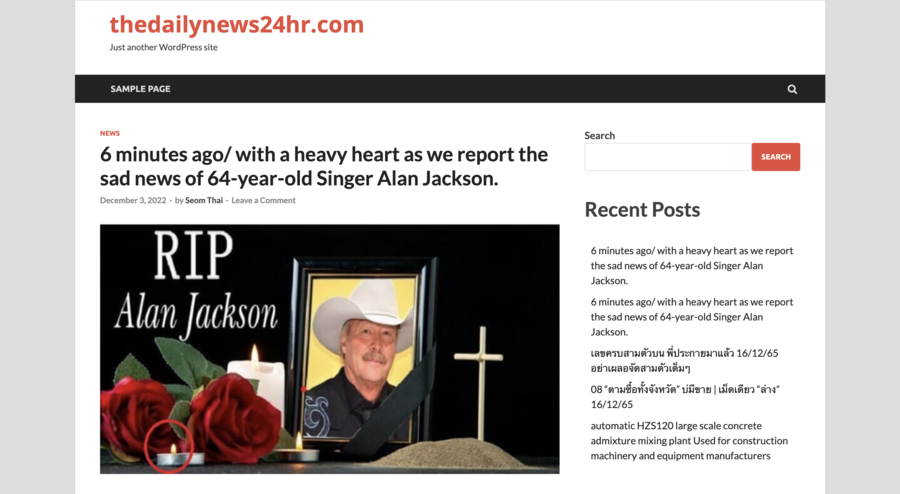 Although the headline does not say Jackson has died, it is implied with words like "heavy heart," "sad news" and an image of Jackson in a picture frame next to the words "RIP Alan Jackson." The image is repeated eight times on the page.

In December 7, 2022, phone call, Lead Stories spoke with a representative at Jackson's office who told us Jackson is "definitely not" dead.

In a September 28, 2022, article from Today, Jackson revealed that he had been diagnosed with Charcot-Marie-Tooth (CMT), a group of disorders that cause damage to the nerves that transmit information and signals from the nervous system to the rest of the body. It is one of the Muscular Dystrophy diseases and causes muscle weakness and loss of sensation. He told Today that the disease has been impacting his performances, but it's not life-threatening.