Is it impossible that Nazi Germany used a gaseous form of hydrogen cyanide, also known as Zyklon B, to commit mass murder in World War II concentration camps because the compound is "air soluble" and conditions in gas chambers "would not allow for sufficient concentrations of gas to form"? No, that's not true: A chemistry professor told Lead Stories that the term "air soluble" is scientifically meaningless, and that Zyklon B is so potent that it would be entirely possible for lethal concentrations to form in enclosed spaces.

Moreover, court testimony from Rudolf Höss, the Nazi commandant of the Auschwitz-Birkenau concentration and extermination camp, confirmed that Zyklon B was used to exterminate untold thousands of camp inmates, most of whom were Jews.

The claim appeared on Instagram on December 1, 2022. The claim uses text that is almost a verbatim duplicate of text from a June 16, 2021, discussion on the forum site 4chan. The post read:

Computer, simulate a mid-twentieth century shower room.Eastern European architecture, metal fixtures, wooden doors.
Now, feed the shower taps into a pressurized container of hydrogen cyanide and release enough of the gas into the room to kill 200 women and children

[Error Message] Hydrogen cyanide is air soluble. The conditions described would not allow for sufficient concentrations of the gas to form. Please change the parameters of the enclosure to achieve the desired effect.

Fascinating. Thank you computer that's all I needed for now.

Here is how the post looked on Instagram at the time of the writing of this fact check: 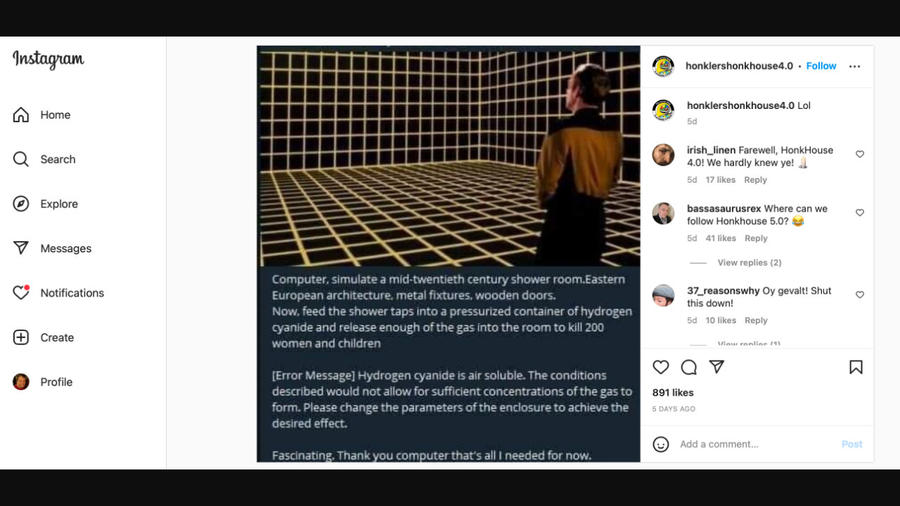 The claim does not mention the Holocaust or concentration camps specifically. However, its description of "eastern European architecture" with "metal fixtures" where "women and children" were sent for execution is a clear reference to World War II-era Nazi concentration camps such as Auschwitz-Birkenau in Poland. The Nazis killed an estimated 1.1 million people at Auschwitz alone, many of them in gas chambers, where prisoners were forced to inhale Zyklon B.

The post on Instagram implies that the Nazis could not have used Zyklon B as an agent of genocide because it is "air soluble." In a December 6, 2022, email to Lead Stories, David Mills, a chemistry professor at the University of Manchester in the United Kingdom, said the term "air soluble" is "nonsense from a chemistry perspective." Mills wrote:

I've never heard this phrase in all my years in chemistry... When we refer to a solid or liquid being converted to a gaseous phase and then mixing with air so that it is miscible we would use words like boiling or sublimation, not 'soluble.' The phrase used by this author is basically suggesting that hydrogen cyanide stays in the air rather than goes into the body via the lungs because it prefers to be 'solubilised' in the air. However, there is not much stopping molecules in the air from leaving the air given an opportunity, and such an opportunity is presented when we breathe in and they can get taken up by binding at reactive sites in the body.

As for the claim that conditions in gas chambers "would not allow for sufficient concentrations of [Zyklon B] to be formed" to kill hundreds of people, Mills said:

There is nothing stopping a hydrogen cyanide concentration from getting high enough to kill human beings in an enclosed area ... You would need to calculate the volume of a chamber, consider how many vents/openings there are, and work out the flow rate going in vs. out to show how long it would take to reach a lethal concentration. Without knowing the pressure of the cylinder, flow rates, or the other technical details mentioned above, there are too many parameters missing to provide anything quantitative here.

Hydrogen cyanide gas can kill humans who inhale it within 10 to 60 minutes at a concentration of 100 to 300 parts per million in the air, according to The Cyanide Code, a Washington, D.C.-based certification program for companies that use cyanide in gold and silver mining. Inhalation of 2,000 parts per million "causes death within one minute," the organization says.

Mills pointed out that the lethal concentration of hydrogen cyanide, equivalent to 0.03 percent of an atmosphere, or an area of gaseous space, is far lower than the deadly concentration of carbon monoxide, which is known to kill humans (see "2.1. Acute Lethality") who inhale it within five minutes at around 13,000 parts per million, or 1.3 percent of an atmosphere. "The notion that the atmospheric composition of a partially enclosed space can fill with 1.3% of one gas but not 0.03% of another does not follow any scientific logic," Mills said.

Beyond the scientific proof that Zyklon B can be used to commit mass murder, former Auschwitz commandant Rudolf Höss made it clear that the Nazis used the gas for precisely this purpose in his April 15, 1946, testimony before the International Military Tribunal at Nuremberg, Germany. Höss confirmed to the chief interrogator that he had made the following statement:

When I set up the extermination building at Auschwitz, I used Cyklon B. which was a crystallized prussic acid which we dropped into the death chamber from a small opening. It took from 3 to 15 minutes to kill the people in the death chamber, depending upon climatic conditions. We knew when the people were dead because their screaming stopped. We usually waited about onehalf hour before we opened the doors and removed the bodies. After the bodies were removed our special Kommandos took off the rings and extracted the gold from the teeth of the corpses.

Höss' statement was backed up by Pery Broad, a Brazilian who joined the German Waffen-SS during World War II. In 1965, Broad wrote an account of how victims were gassed at Auschwitz, part of which is quoted on the website of the Israeli Holocaust memorial center Yad Vashem:

'A number of victims noticed that the covers had been removed from the six holes in the ceiling (of the gas chamber). They screamed in terror when a head, covered in a gas-mask, appeared at one of the holes. The "disinfectors" went to work.... Using a hammer and chisel, they opened some innocuous-looking tins which bore the inscription "Zyklon, to be used against vermin. Attention, poison! To be opened by trained personnel only." As soon as the tins were opened, their contents were thrown through the holes, and the covers were replaced immediately... about two minutes later, the screams died down, and only muffled groans could be heard. Most of the victims had already lost consciousness. Two more minutes passed, and Grabner (one of the SS men) stopped looking at his watch. Absolute silence prevailed.'

Additional Lead Stories fact checks about the Holocaust can be found here.