Did police in Kennesaw, Georgia, investigate a toxin-laced tissue that was reportedly placed on a gas pump handle by human traffickers to incapacitate their victims? No, that's not true: Lead Stories contacted two law enforcement agencies in Cobb County, Georgia, where the incident allegedly took place, and neither had any record of that, nor of it being reported. The person making the claim has, since this fact check was first published, posted online a video showing she made a call to 911 on December 11, 2022, and showing an automatic Cobb County text message asking her to rate her experience with 911.

The claim appeared on Facebook, published by HGTV host Egypt Sherrod on December 11, 2022. The description for the post says:

Aughhh you hear about this stuff, but to literally witness a set up in action makes my heart beat out of my chest. This literally just happened in Kennesaw. I am so grateful GOD placed me at this gas station at this exact time to tell this young lady DO NOT TOUCH. #SeeSomethingSaySomething #copswerecalled

The video was published on Facebook at 10:55 p.m. EST on December 11, 2022, by Sherrod. In the 73-second clip, she describes what she said she had witnessed at a Shell gas station, about 25 miles northwest of Atlanta:

OK, babies. It's late. I'm out getting a tank of gas and I watched a man put this on the gas handle and I just had to run over to tell the little girl not to touch it. But I watched him do this.

Sherrod turns her camera to show what appears to be a tissue or napkin stuffed into the handle of a gas pump. Here's a still image from the video: 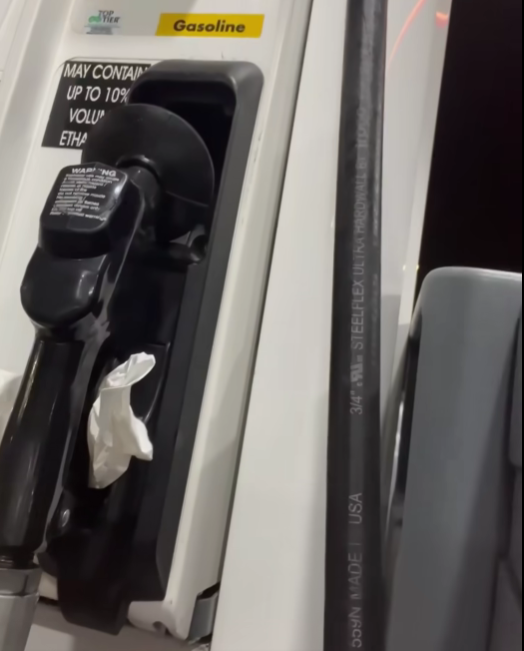 Sherrod then continues her story:

Do you see the tissue? Do you see it? So, if you ever find yourself at a gas station and a tissue is on the handle or you come back to your car and you see a tissue under the handle of your vehicle, do not touch it at all because this is what ... traffickers are doing. They're putting a toxin on the tissue and then they're putting it in a place where you have to touch and then they're waiting for you to pass out. OK? And so, this little girl pulled up getting ready to fill up her tank and the guy is literally sitting in the car right there. He just walked away because he heard me talking about it. But pay attention, OK? Stay alert.

Sherrod hashtagged her video #copswerecalled, so Lead Stories, using the same language other than the agency name, contacted the two law enforcement agencies that would have had jurisdiction to investigate the alleged incident:

Today, I'm working on a story to check the accuracy of an online report that says: Napkin under gas pump handle at a Kennesaw Shell station

This video posted by a woman named Egypt Sherrod purports to be out of Kennesaw and talks about an alleged trafficking event involving a napkin put on a gas pump handle.

As the woman in the video tells it, she saw a man put the napkin/tissue loaded with 'toxins' on the pump and was waiting for someone to touch it so they could be kidnapped. The video runs just over a minute if you would like to watch it.

Did [Kennesaw PD/Cobb County PD] investigate this? If so, what was the outcome of the investigation?
Was there any credibility to the woman's claim?
Was there anything (drugs/poison, etc.) on the napkin/tissue?
Was anyone arrested?
Anything you'd like to add?

We have not been called about this or investigated any similar incidents.

Since Kennesaw is located in Cobb County, Lead Stories also contacted the Cobb County Police to see if the agency had responded. This is what Alanna Rucker, a representative of the department's central records unit, said in a December 13, 2022, email:

The Cobb County Police Department has reviewed its files and has determined there are no responsive documents to your request.

We have no reports involving an Egypt Sherrod.

Eight hours before publishing, Lead Stories also reached out to Sherrod, leaving messages at the phone numbers listed on the website for her real estate group and sending emails to her as well.

Sherrod, best known for her HGTV series "Flipping Virgins" and the show "Property Virgins" wrote back December 13, 2022 to say she did not approve of the initial fact check and would not answer Lead Stories' questions.

She later posted this Facebook video in which she describes what she says happened and then, at the 3:35 mark shows a phone record of a 911 call and at 3:49 shows a screenshot of a text message from Cobb County 911 Communications Center asking her to rate her experience: 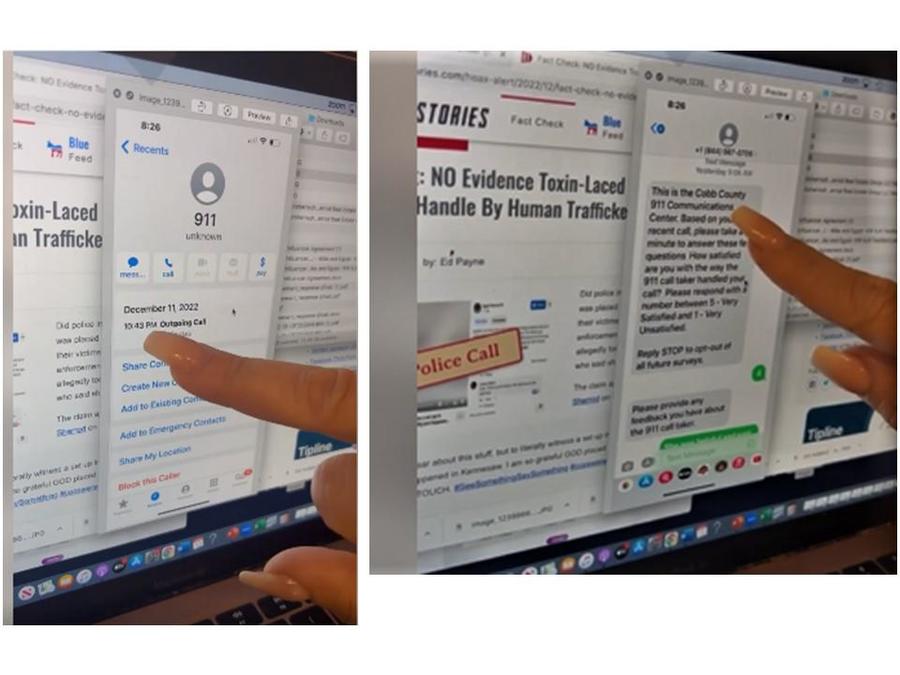 In a December 14, 2022, phone interview with Lead Stories, Cobb County Police Public Information Officer Shenise Barner was able to shed additional light on what happened after the 911 call and why law enforcement didn't originally have any details about it:

The caller didn't meet with the officer, so there is no case number or anything attached for there to be even a follow-up report.

An officer was dispatched to the gas station, Barner said, but it wasn't to meet with Sherrod. Barner called it a "check-only" response:

They're calling, letting us know this is ... what occurred. Can you check the area? Didn't want to meet with the officer. ... That's the reason why there isn't a report or any form of records out of it. Yes, there was a dispatch made but no officer was able to speak with a complainant.

Paper napkins/hand towels are a common feature of fuel pump islands, where people use them to clean their hands and to avoid picking up germs from pump handles. In addition to early COVID-19 pandemic warnings not to touch pump handles, public health doctors have warned fuel nozzle handles are a worse biohazard than gas station bathrooms, urging travelers to use a paper towel when pumping gas. Autotrader.com, for instance, devoted an entire March 25, 2020 article to the best ways to pump gas without gripping the nozzle handle touched by others.

Reports about toxin-laced napkins have appeared on social media before. Lead Stories addressed them in a September 2022 analysis called, "Fact Check: NO Evidence Drug-Soaked Napkins Are Being Placed in Car Door Handles."

Fears of such purported attacks were called "hysteria" in a commentary published in Science Magazine on July 15, 2022, the previous fact check reported. Even so, such reports do "pop up from time to time," the National Institute on Drug Abuse told Lead Stories on September 19, 2022. In August 2022, for example, a Texas woman claimed that she was drugged after touching a napkin stuffed into her car door handle. However, officials with the Houston Police Department, with whom a police report was filed, have not found evidence to corroborate the woman's story.

"There are numerous reports online related to a single incident in Houston. This is not a legitimate concern -- illicit drugs like fentanyl are not absorbed through the skin," Bruce Goldberg, a toxicologist and director of the Division of Forensic Medicine at the University of Florida College of Medicine, told Lead Stories in an email received on September 20, 2022.