Do photos circulating on social media show a recently captured Ukrainian POW with a swastika tattoo on his back? No, that's not true: These are seven-year-old images, taken during fighting in 2015 with armed, Russia-backed separatists in Ukraine's eastern Donbas region. A 2015 video interview with an individual who closely resembles the man in these photos established that he is a Russian passport holder.

The inscription in the composite image read:

AND JUST LIKE THAT, LIBERALS DON'T WANT TO PUNCH NAZIS ANYMORE

UKRAINIAN SOLDIERS KEEP GETTING CAPTURED WITH THESE TATTOOS 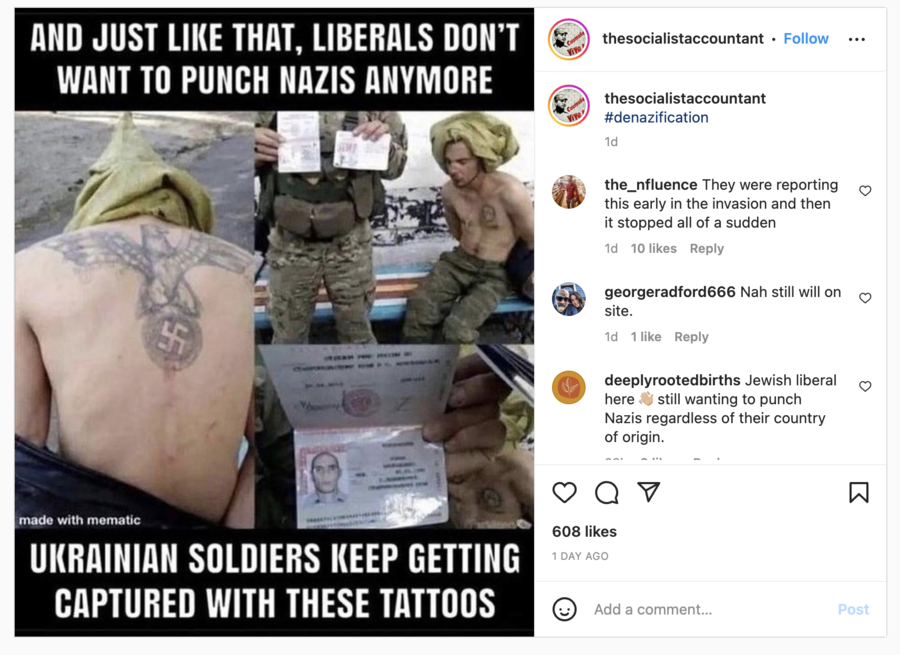 However, the pictures shown above were not taken in 2022, and they do not provide any evidence that the man in question is a Ukrainian soldier.

The Instagram post reused and repurposed an old story, widely covered by Ukrainian media in 2015. On June 15, 2015, for instance, the Ukrainian TV news program TSN released a report (archived here) about the capture of a Russian citizen fighting for separatists in Ukraine's eastern Donetsk region that included the same images contained in the composite posted on Instagram.

Coverage by the Ukrainian news portal Podrobysti (archived here) also included the same photos of a shirtless man with a swastika on his back.

Both reports identified him as a Russian citizen named Roman Tolstokorov.

A video interview with a man who appears to be the same individual was uploaded to YouTube on June 14, 2015. It opens with a shot of a Ukrainian-speaking uniformed soldier showing what was allegedly found on a prisoner: a military service document issued by the so-called Donetsk People's Republic (territory in Ukraine's Donetsk region claimed by Russia-backed, armed separatists) and a red passport with "Russian Federation" written in Russian Cyrillic on its red cover, and Russia's coat of arms on the first page. 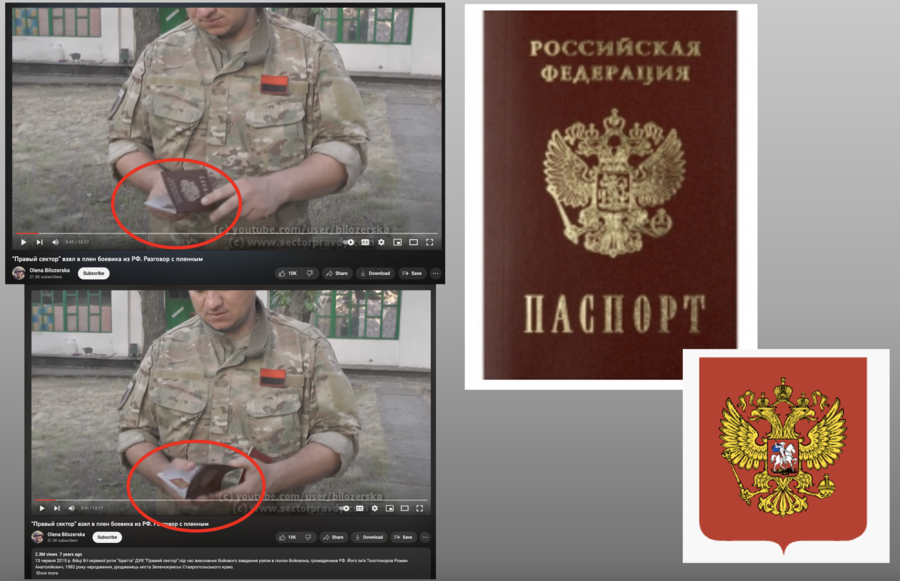 In 2016, Ukraine substituted domestic paper passports for an ID card. Today, however, many Ukrainians just store their identification information in an app that allows electronic access to government services within Ukraine.

Ukrainian passports for international travel most frequently have a blue cover. Several other colors are used for diplomats, armed forces personnel, stateless persons and refugees, but none of them are red and none of them use Russian.

The red-covered, Russian-language documents featured in the video were issued for a Roman Tolstokorov, who was born in the Stavropol region of Russia: 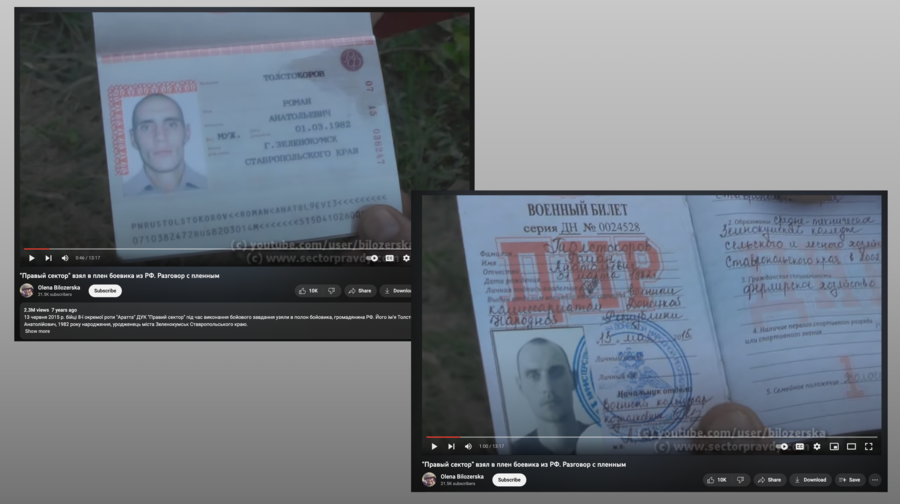 The 2015 video features a Russian-speaking man who resembles the man seen in these documents. He confirms that he is Russian and says that he briefly served as an armed guard in the so-called Donetsk People's Republic militia and made repairs to their KAMAZ truck, a heavy-duty vehicle. For that, he was promised a monthly salary of 15,000 rubles, the equivalent of less than $250 today. However, the man says he did not get along well with other people in his unit: They did not like his tattoo. According to the man, he got into a fight over this matter and was beaten. He then allegedly decided to cross into a Ukrainian-controlled area of the Donetsk region, where he was detained.

The man claims that he spent time behind bars for "stealing and drugs." Explaining the meaning of his tattoo, he describes it as a "prison symbol": 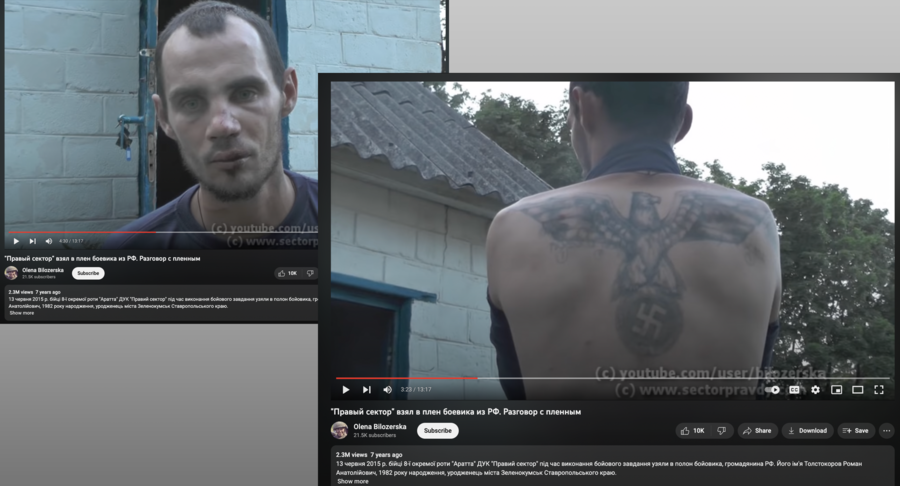 Russian prison culture has its own distinct language and use of symbols. In this particular context, swastikas "most often" mean a rebellion against prison or prison camp officials, according to the Russian website Petrovka 38, the digital descendant of a Soviet-era Moscow police newspaper.

Nonetheless, the swastika's broader meaning cannot be overlooked. Back in 2015, when Ukrainian media reported that two Ukrainian volunteer battalions, the Praviy Sektor (Right Sector) and Donbas, had detained a man called Roman Tolstokorov, social media users responded by jibing about the supposed Nazi sympathies of the Russians aiming to "liberate" Ukraine from "fascism," a narrative that the Kremlin has actively promoted since 2014.

Additional Lead Stories fact checks of claims about the ongoing Russian-Ukrainian war can be found here.