The claim about canola oil's toxicity appeared in a video posted on Instagram on December 25, 2022. In the video, an unidentified on-camera narrator claimed:

Canola oil is toxic. Here's how it's made. It starts with the seeds of a rape plant, which are completely toxic to humans. In order to make canola oil, these plants must be specially bred to lower the levels of erucic acid, a toxic fatty acid strongly associated with heart lesions. These seeds are then ground at high temperatures to extract the fragile oil, which is inevitably oxidized because of this harsh process. This oil must then be washed with solvents like hexane, a known neurological toxin. Then it must be processed with bleaching and deodorizations so it doesn't smell rancid like it really is. After all of these steps, the canola oil is left oxidized, contaminated with solvents and containing significant levels of trans fatty acids -- and this oil is marketed to you as healthy by the American Heart Association and found in so many of our foodstuffs today. If you want to be healthy, get this damaged oil out of your diet completely.

Here is how the post appeared at the time of the writing: 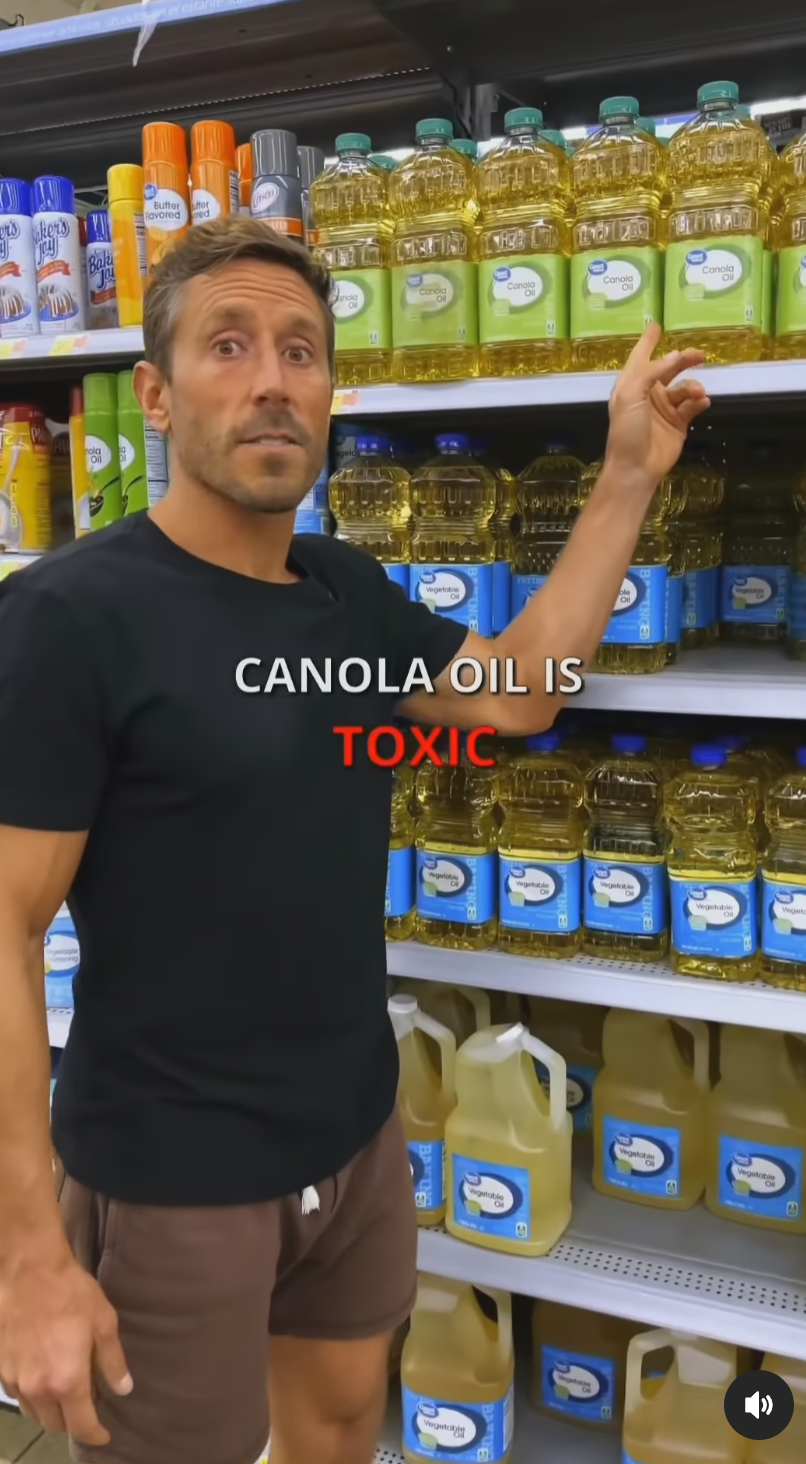 This claim about canola oil is an old canard: In 2019, for instance, Lead Stories debunked a claim that canola oil causes brain damage, dementia and weight gain.

In a January 4, 2023, email to Lead Stories, Alice H. Lichtenstein, the director and senior scientist of the Cardiovascular Nutrition Laboratory at Tufts University's Friedman School of Nutrition Science and Policy, emphasized that claims that food-grade canola oil is toxic for humans are untrue,

"There is no basis on which to claim that any canola oil on the market contains erucic acid or the oil is extracted in any way that is different from other plant oils, such as soybean oil," she said. "Were this the case, canola oil would not be allowed to be sold in the U.S. and likely anywhere else in the world." Lichtenstein is the lead writer for the American Heart Association's "2021 Dietary Guidance to Improve Cardiovascular Health" report.

Canola oil is produced from the seeds of the canola plant. The misconception about canola oil's toxicity largely stems from the fact that the oil also is partly derived from the rapeseed plant. Rapeseed oil has high levels of erucic acid, which, "in large amounts," is toxic for humans, but canola oil has "very low levels" of this acid, the Mayo Clinic advises.

Lead Stories further discussed the claim about canola oil's dangers with Melissa Prest, a Chicago-based registered dietician nutritionist and spokesperson for the Academy of Nutrition and Dietetics. In an email sent on January 4, 2023, Prest confirmed that "canola oil has very low levels of erucic acid and is not toxic to humans."

Canola oil is made by a process of chemical refinement called RBD (Refined, Bleached, Deodorized), which involves the use of hexane, a volatile solvent with low toxicity, that has been used to extract oils from seeds since the 1930s. (For more information on RBD, see this article by the Canola Council of Canada.)

"Seeds are first crushed to express the oil, and then the seed oil is extracted with a low-boiling solvent, like hexane. Deodorization is the final step and this process produces a bland taste in the oil," Prest said.

In 2005, the Environmental Protection Agency reviewed scientific studies to determine the toxicity of hexane and reported that no data exists on hexane's "potential oral toxicity" in humans and insufficient information exists to draw conclusions about its possible role as a carcinogen in humans. (The FDA specifies that hexane can be used as an additive in food for humans under certain conditions.)

Prest added that "Most everyone has been exposed to non-toxic, small levels of hexane in the air because it is most commonly found in gasoline," but the amounts found in hexane-processed seed oils "have not been found to cause harm to humans."

"Hexane is not stored in the body and does not build up," she continued. "So, any hexane that is ingested or inhaled in the environment will leave your body in your urine within a day or two."