Did the Central Intelligence Agency come up with the term "conspiracy theorist" to discredit the views of those casting doubts on the results of the official investigation into the 1963 assassination of John F. Kennedy? No, that's not true: Archival materials show that the term was in use before November 22, 1963, when the 35th president of the United States was fatally shot in Dallas.

The claim appeared on Instagram on January 4, 2023. It said:

Conspiracy theorist was a term created by the CIA during the Warren Commission to combat critical thinking regarding the assassination of JFK.

The post contained a graphic referring to conspiracy theorists as truth seekers.

This is what it looked like at the time of the writing of this fact check: 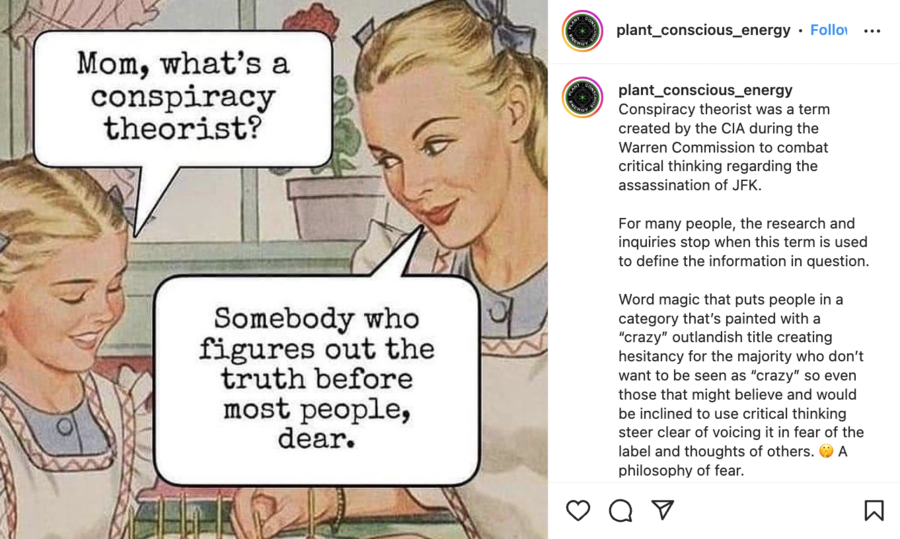 The Merriam-Webster Dictionary defines a conspiracy theory as "a theory that explains an event or set of circumstances as the result of a secret plot by usually powerful conspirators." As an example of the word's use, the dictionary cites "the conspiracy theories surrounding Kennedy's assassination."

Rather than the CIA, one of the first people to use this wording was Charles Astor Bristed, a 19th-century Yale and Cambridge-educated American author known for promoting the American version of English, among other things. On January 11, 1863, The New York Times published his letter discussing claims that British elites were undermining the U.S. during the Civil War for their own financial gains:

England has had quite enough to do in Europe and Asia, without going out of her way to meddle with America. It was a physical and moral impossibility that she could be carrying on a gigantic conspiracy against us. But our masses, having only a rough general knowledgeof foreign affairs, and not unnaturally some what exaggerating the space which we occupy in the world's eye, do not appreciate the complications which renderedsuch a conspiracy impossible. They only look at the sudden right-about-face movement of the EnglishPress and public, which is most readily accounted for on the conspiracy theory.

According to the Library of Congress' archive of historic U.S. newspapers, the term "conspiracy theory" appears in the American press at least 907 times between 1863 and 1962.

"Conspiracy theorist" is a relatively more recent way to describe a person sharing such beliefs. Yet, according to the Merriam-Webster Dictionary, it was first used in 1961, predating Kennedy's assassination by two years.

Lead Stories, however, was able to find a still earlier example in a 1960 academic paper titled "The Conspiracy Theory of Politics of the Radical Right" by political scientist William Chandler Baum:

Conspiracy theorists have long linked the CIA to Kennedy's assassination and the investigation into his death. But the Warren Commission, established by then-President Lyndon B. Johnson to probe the slaying, was an independent, bipartisan body, not a CIA-affiliated entity. The Commission's final report, published in September 1964, concluded that, based on the available evidence, Marine veteran Lee Harvey Oswald fired the shots that killed Kennedy and wounded Texas Gov. John Connally.

Discussing investigations of claims stating otherwise, the report refers to them as "theories," "speculations," "rumors" and "hypotheses." The commission used the words "conspiracy" or "conspiratorial relationships" in reference to an act of plotting versus a theory.

On January 4, 1967, the CIA produced a dispatch summarizing criticism of the Commission's findings. While the dispatch recommends "point[ing] out that the conspiracy talk appears to be deliberately generated by Communist propagandists," these declassified materials do not contain explicit directions to label anyone as a "conspiracy theorist."

As of December 2022, 97 percent of the materials related to the Kennedy assassination had been released to the public. These documents are available on the website of the National Archives.

Additional Lead Stories fact checks of claims related to the 1963 assassination of John F. Kennedy can be found here.