Does a background screening document prove that Hunter Biden paid his father, President Joe Biden, nearly $50,000 per month in rent to live in his father's Delaware home? No, that's not true: The amount listed on the form as "Monthly Rent" -- $49,910 -- matches what the younger Biden paid in quarterly rent for an office space in Washington, D.C., according to a spokeswoman for Sweden's National Property Board, which manages the property.

The claim appeared in a Facebook post on January 16, 2023. It included a video of podcaster Tim Pool talking to the camera and a caption that read: 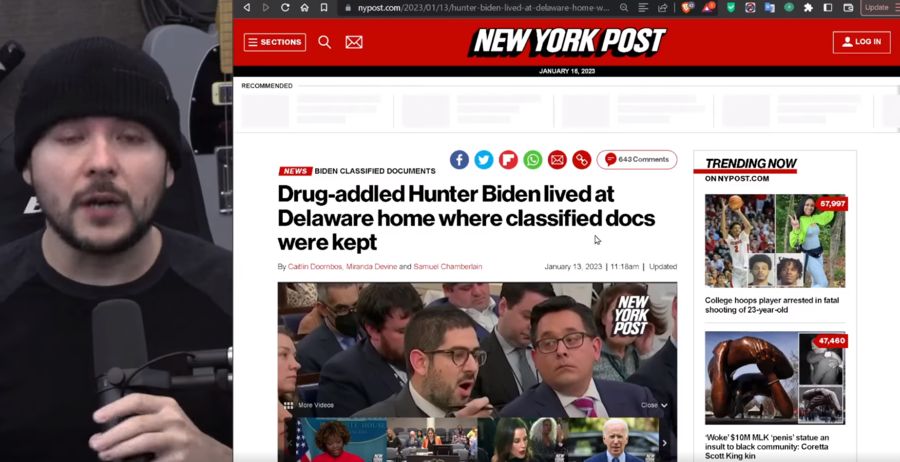 In the video, Pool addresses reporting by The New York Post's Miranda Devine.

On Twitter, on January 12, 2023, Devine posted a background screening document purportedly filled out by Hunter Biden in July 2018. The form lists President Biden's Wilmington, Delaware, home as the younger Biden's current address. Under "Current Residence," the document asks for a company name (filled in as "Owasco PC"), move-in and move-out dates (provided as March 2017 and February 2018, respectively), and monthly rent (listed as $49,910). You can see the document below:

In 2018 Hunter Biden claimed he owned the house where Joe Biden kept classified documents alongside his Corvette in the garage Via @jj_talking pic.twitter.com/L7c80MRRiS

Pool interpreted the background screening document to mean that Hunter Biden paid his father almost $50,000 per month in rent to live at his Delaware home. Shortly after the 5:30 mark in the video, Pool claims:

It does show that he was giving his dad 50 grand per month for a property that shouldn't cost anywhere near that.

The document, however, does not prove that Hunter Biden paid his father $50,000 in rent.

Although the monthly rent of $49,910 is listed under "Current Residence," it also falls under the company name of "Owasco PC," strongly suggesting the rent may have been in reference to Hunter Biden's business expenses. And, in fact, the younger Biden paid that exact amount -- $49,910 -- in quarterly rent for an office space in House of Sweden, according to a spokeswoman for Sweden's National Property Board, which manages the property for the Kingdom of Sweden.

In emails to Lead Stories, dated January 19 and January 20, 2023, Maria Uggla, a spokeswoman for Sweden's National Property Board, confirmed Hunter Biden's quarterly office rent, as well as the exact dates of his lease -- March 2017 to February 2018. Note that those dates are an exact match for the move-in and move-out dates provided on the background screening document.

Shortly after the claim about Hunter Biden paying his father nearly $50,000 per month in rent started to spread on social media, Devine urged her Twitter followers not to jump to conclusions. She wrote, in part: "The rent may refer to the $50k rent he paid for his office at House of Sweden."

Caution re wild speculation. This was for Hunter Biden's application for an apartment in a hip Hollywood complex he was desperate to get into. Big-noting by falsely claiming to own dad's house in DE. The rent may refer to the $50k rent he paid for his office at House of Sweden pic.twitter.com/5NhblYNSal

Lead Stories contacted Hunter Biden's attorneys for comment on the claim. We will update this fact check, as appropriate, if we receive a response.

Additional Lead Stories fact checks of claims that relate to Hunter Biden can be found here.