Can websites like Quake Prediction "predict" an earthquake? No, that's not true: Scientists cannot predict when, where or at what magnitude an earthquake will occur. However, scientists can estimate the probability that an earthquake of a particular magnitude or higher may occur in a certain area within a specified amount of time. Such a forecast is not used to "predict" the precise timing of an earthquake event or issue a warning as is suggested in some social media posts. No reputable authority would issue such a warning.

The claim originated on Instagram on January 2, 2023, featuring a screenshot of a tweet from the same day (archived here). The post claimed to have predicted a "dangerous" earthquake in California. It read: 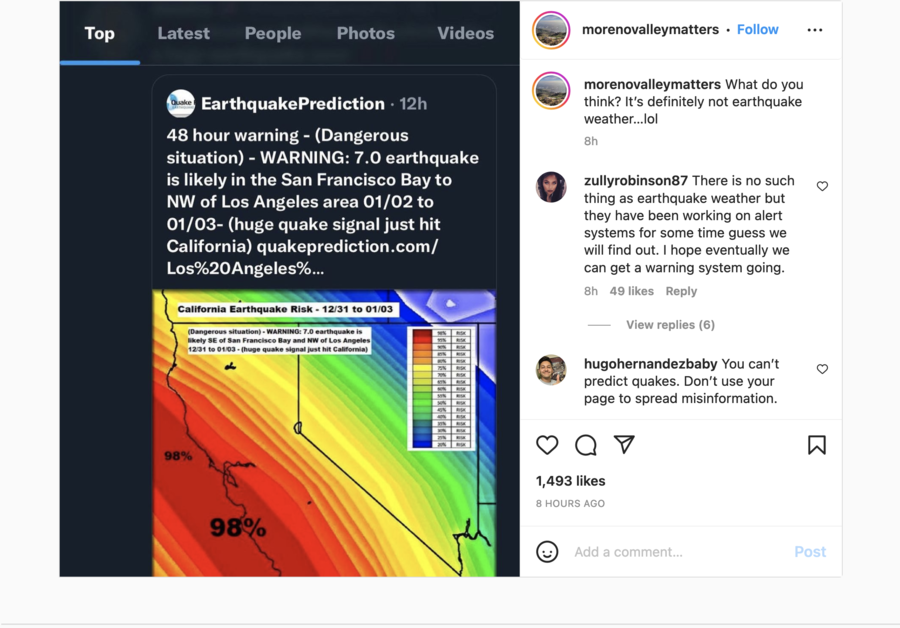 A link shared in the tweet led social media users to the website quakeprediction.com, which is not a known scientific research institution. As the website states, it is "not associated with the USGS [U.S. Geological Services] earthquake prediction site." The USGS is the government scientific and technical agency that studies earthquakes and associated hazards. USGS seismologists track earthquakes above a 1.0 magnitude and make that data available to the public. The earthquake predicted in the social media post did not occur.

In an email to Lead Stories sent on January 5, 2023, Paul Laustsen, USGS public affairs representative, said that Quake Prediction does not source data it uses to make predictions, offering "the first clue that the work is not credible." It is the consensus of the science community that it is not possible now, and may never be possible, to accurately predict an earthquake due to the number of variables involved in the earth's movement, he added.

Scientists can only calculate the probability that a significant earthquake will occur in a general area within a certain number of years, the USGS wrote. The American Geosciences Institute adds that forecasts do not provide any certainty but only provide information on the likelihood that an earthquake may occur over a window of time. No reputable authority will issue such a warning because scientists cannot forecast the day and time an earthquake will occur, notes the California Earthquake Authority. Scientists can forecast aftershocks as they tend to follow a pattern of decreasing frequency and magnitude after an earthquake has occurred, as the science and engineering institute Caltech describes.

Tectonic plates are large slabs of rock located in the lithosphere, which includes the Earth's crust and upper mantle. Along the boundaries of these plates are what is known as faults. An earthquake occurs when one fault slips past another. Because Earth is constantly shifting, these movements create a "100 percent chance of earthquake" every day. Each day, somewhere on the planet will be an earthquake but exactly where, when and at what magnitude cannot be predicted. False predictions are often general and vague enough that "there will always be an earthquake that fits," the USGS writes.

Using probability, however, scientists can create a statistical analysis of earthquakes from the past to determine the general area, magnitude and timeframe (generally years or decades) of a future earthquake.

This is done by studying the history of large quakes in an area and measuring the strain that accumulates in the lithosphere. Plate movement builds strain in rocks, similar to how a rubber band might break when pulled too tightly. The strain on one part of the fault system caused by an earthquake can increase the strain on another part, which may increase or decrease the frequency or intensity of another earthquake in that region. By studying the speed at which strain accumulates, scientists can predict the probability of an earthquake.

In addition to strain, studying how much time passed since the last earthquake along that segment, and how much strain was released in the last earthquake, cumulatively provides the information needed to calculate the timeframe -- often years or decades -- of the general region where an earthquake might occur.

Earthquake estimations are categorized by the USGS as follows:

Earthquake early warning systems use earthquake science and the technology of monitoring systems to alert devices and people when shaking waves generated by an earthquake are expected to arrive at their location. The seconds to tens of seconds of advance warning can allow people and systems to take actions to protect life and property from destructive shaking.

Earthquake Forecasts are like probabilities but for shorter time windows, and we generally apply this term to aftershocks. After a large earthquake, there are aftershocks that are typically less frequent and smaller over time. Most aftershock sequences follow the same pattern, so the probability of an aftershock in a time window following an earthquake can be determined. These probabilities might be larger than 1-in-30.

Earthquake Probabilities describe the long-term chances that an earthquake of a certain magnitude will happen during a time window. Most earthquake probabilities are determined from the average rate of historical events. Assuming the annual rate is constant, one can make a probability statement about the likelihood of such an event in the next so-many years. These probabilities might range from 1-in-30 to 1-in-300.

While scientists cannot with certainty predict an earthquake, they have established methods to quickly notify residents of when an earthquake has occurred. ShakeAlert is the USGS earthquake early warning system that detects significant earthquakes below the Earth's surface so as to alert people above ground before the shaking is felt. This is not a prediction system, but rather an alert that indicates that an earthquake has begun and shaking is imminent.