Did the World Economic Forum (WEF) or its founder and executive chairman, Klaus Schwab, tweet or say that "Jesus is the original fake news"? No, that's not true: There is no evidence that the statement is from Schwab or the WEF. The claim, widely disseminated on social media, originally appeared in an article on a website known for publishing fake news and conspiracy theories.

Humans are 'hackable animals without souls', according to Klaus Schwab and the World Economic Forum, who have also declared that 'Jesus is the original fake news' and that WEF leaders are 'acquiring divine powers' of 'creation and destruction.'

Here's how the tweet appeared on the day of writing:

The post's text and claims are a direct quote from the opening paragraph of a December 9, 2022, article (archived here) from NewsPunch, published under the title "World Economic Forum Declares 'Jesus Is Fake News' and 'God Is Dead.'" The tweet also contains a screenshot of and a link to the NewsPunch article.

Here's how the NewsPunch story appeared on the day of writing: 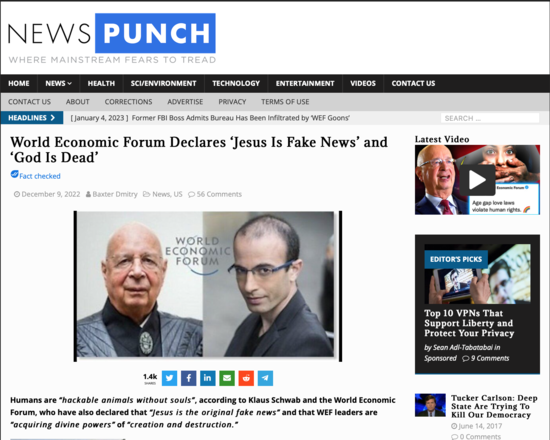 The story itself features a composite image of Schwab and Israeli history Professor Yuval Noah Harari. The teaser image for a video embedded in the story displays a fabricated WEF tweet that declares, "Jesus is the original fake news."

This is how the video's teaser image appeared on the day of writing: 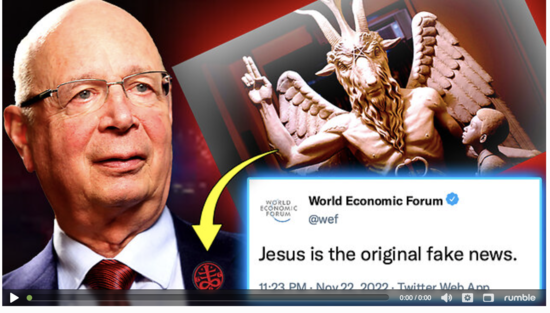 A Lead Stories review of the WEF's verified Twitter feed and its archived tweets from December 9, 2022, found no evidence that the organization or Schwab made any statements or declarations about Jesus. Although not referenced in the NewsPunch article, Schwab's own official Twitter account and its archived tweets also did not contain such a statement.

A search of the press releases on the WEF's website revealed no evidence that the organization ever officially commented that Jesus is "fake news."

The comments attributed to the WEF by NewsPunch stem from remarks by Harari, a former WEF speaker, that have been taken out of context. None of these remarks refer to the WEF.

The statement "Jesus is the original fake news" comes from a 2018 interview Harari gave at Google. At the 27:27 mark in the video, Harari, a Hebrew University of Jerusalem history professor who explores macro-historical issues, tells the interviewer that, "All this story about Jesus rising from the dead and being the son of God, this is fake news." During the discussion, Harari asserts that "fictional storytelling" has been used throughout history to organize and unite communities, including around religious articles of faith.

Harari, an author who considers himself a philosopher, has discussed the concept of humans as "hackable" on multiple occasions, including in a speech at the WEF's 2020 annual conference in Davos, Switzerland. His remarks were part of a general warning about the possible dangers of rapid technological advances and the potential for "digital dictatorships" that can continuously monitor people. At the 9:47 mark of the video, Harari presents an "equation" in which biological knowledge, computing power and data equals the ability to "hack humans."

"If you know enough biology and you have enough computing power and data, you can hack my body and my brain and my life, and you can understand me better than I understand myself," Harari said. He did not state that such "hacking" is the goal or intention of the WEF.

The third claim in the NewsPunch article -- that "WEF leaders are 'acquiring divine powers' of 'creation and destruction'" -- also stems from a Harari remark.

In a 2020 interview about the adaptation of his book "Sapiens: A Brief History of Humankind" into a graphic novel, Harari said at the 1:05:35 mark in the interview:

We are really acquiring divine powers of creation and destruction. We are really upgrading humans into gods. We are acquiring for instance, the, the power to re-engineer life. And we have to be extremely careful not to confuse this power with wisdom.

His remarks, again, did not refer to the WEF or its leaders.

The outlet that misattributed these remarks to the WEF, NewsPunch, has published fake news articles in the past. Their Facebook page "The People's Voice" even lost its verification checkmark over such fake news, according to a 2018 report from Media Matters For America, a nonprofit misinformation watchdog.

The Terms of Use of the NewsPunch site (archived here) make it clear that the outlet does not stand behind the accuracy of any of its reporting:

A spokesperson for the WEF, an international nonprofit that works with global leaders in politics, business and industry to address various societal challenges, did not immediately respond to a Lead Stories request for comment on the NewsPunch claim. This fact check will be updated if the WEF replies.

Lead Stories submitted a request for comment on the NewsPunch claims to a spokesperson for Harari on January 4, 2023, but did not receive an immediate response. This fact check will be updated if Lead Stories receives a reply.

Additional Lead Stories fact checks about the World Economic Forum and NewsPunch can be found here.