The inmate who ambushed former Subway pitchman Jarod Fogle in a prison recreation yard is so proud of his beat down of the child sex offender that the incident report is posted on his Facebook page.

Steven Nigg, 60, was put in solitary confinement after admitting to pushing Fogle, 38, to the ground and pounding Fogle's face with his fists so hard that his knuckles were bloodied.

The Facebook page, which is maintained by Nigg's family, includes his admission:

"In February of 2016 I assaulted Jarod "Subway Guy " Fogle in the Englewood , CO prison. Jarod pays inmates to serve as body guards and still uses his money for extra privileges . I felt it was unfair to the other inmates , and to the family of his victims. I beat him up in the prison yard and did it for the families of his victims. I've paid a high price for the assault, but I did it because I despise Child Molesters"

Fogle suffered a bloody nose in the attack.

The prison incident report is now the header image on Nigg's Facebook page. 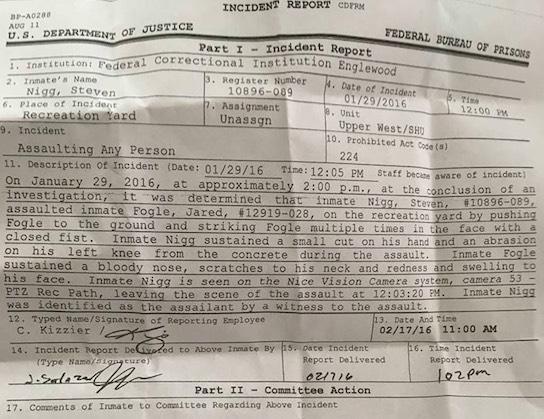 Nigg is serving a 15-year federal sentence for gun possession violations. How he got into trouble is a twisted tale. He was convicted of several robberies -- a motel, a gas station and two convenience stores in the 1990s.

As a felon, he was banned under federal law from possessing guns. But he inherited 150 guns when his father died. A private investigator hired by his stepmom turned him into the feds for illegally selling two guns. He claims his step mother set him up so she could gain control of his father's estate.