Facebook users have been seeing some strange headlines lately, thanks largely to a clickbaiter from Pakistan.

There is a large network of websites using political content to draw an audience to the sites where some dubious advertising techniques are being employed. All of the content published on these websites is lifted from other sources. Some is current news, some is old - but true - news, published without a byline or date. And many stories are fake-news classics.

But most of what is published is satire stolen from "America's Last Line of Defense," a group of websites run by a self-described liberal troll named Christopher Blair. Many people do not recognize the ALLOD-branded watermark left behind on the swiped satire stories. Published without context, these stories mislead many people into believing they are actually new news. Adding to the confusion is the legibility problem - many of the stories have been spun. 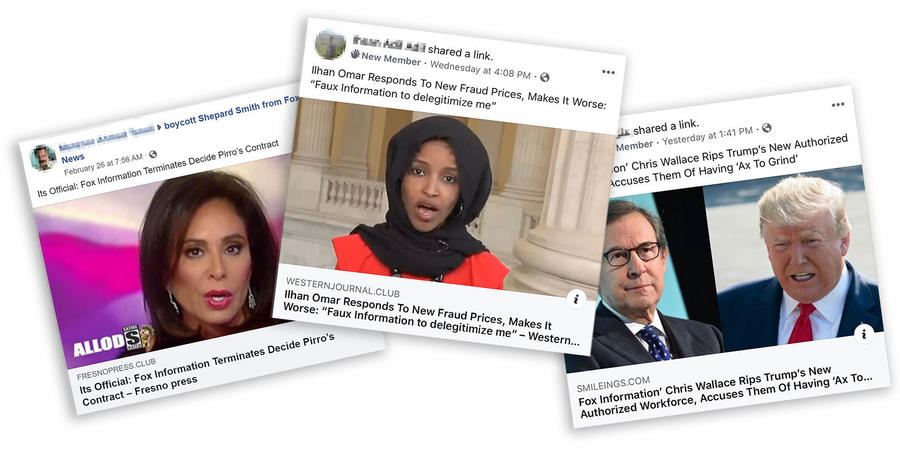 Have you ever encountered an article that just seemed a little off? The structure of the article moves along normally, with sentences and paragraphs. But every once in a while, you stumble on a strange word or an idiom that seems out of place? Readers might assume that these articles were written by people who learned English as a second language or that someone made a typo. Sometimes, the strange words come along with such frequency, the reader can barely make sense of anything. They might assume that the article originated in another language and was translated to English by a computer program rather than a person.

These hard-to-read articles are typically the result of a process called "article spinning." They were not composed by a writer struggling with English, but began as perfectly legible prose, and the stories were then modified (or mangled) with an automated plagiarism helper tool. It used to be that click-baiters limited the spinning to the body of the article, but recently, there has been a trend to include the headlines as well. 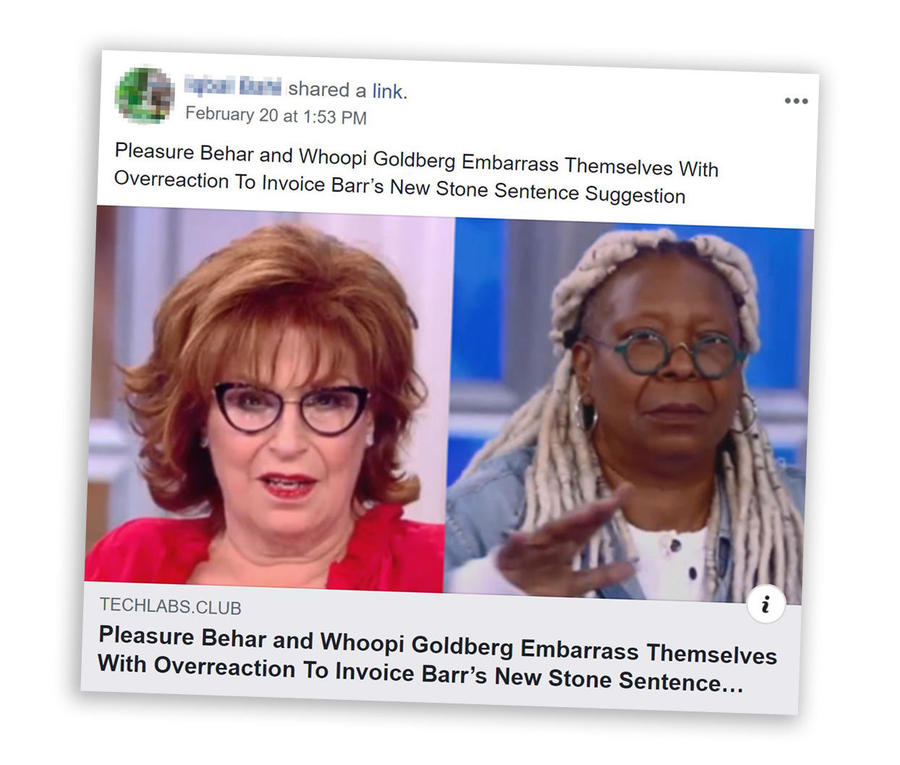 Things get really confusing when the article spinner substitutes other words for people's names. This spun article reposted by TECHLABS.CLUB was taken from NewsThud. The word "invoice" has been showing up in many recent headlines replacing the word or name, Bill. Here's another. This one, as the photo's watermark attests, was lifted from the ALLOD network. Smileings.com, one of the fly-by-night clickbait sites from Pakistan, first appeared with links on Facebook on February 18, 2020. 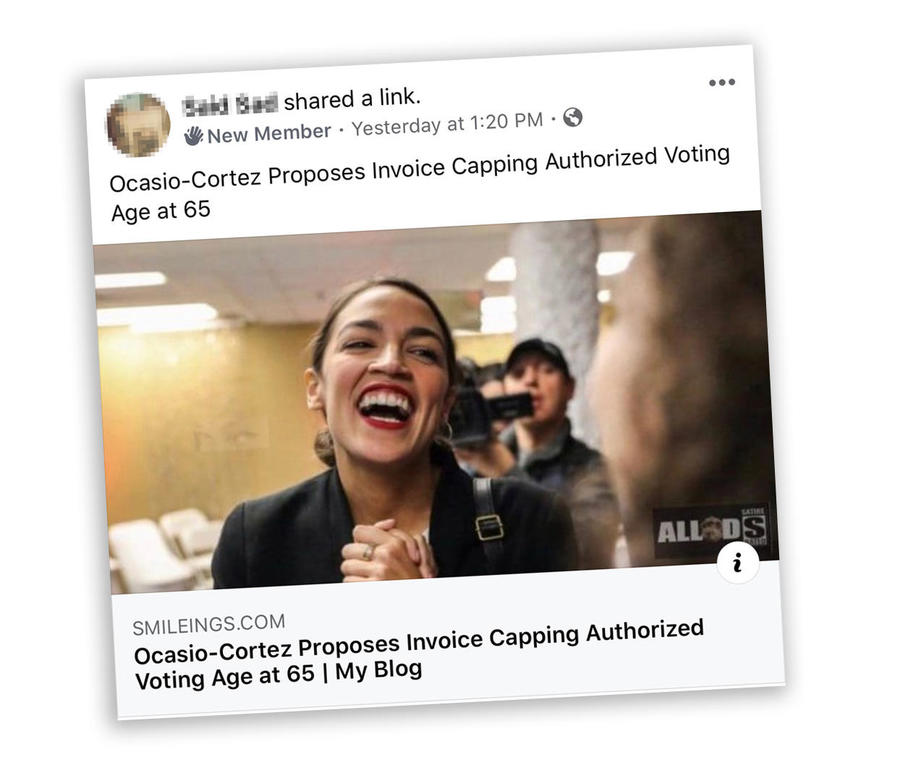 This next one is a challenge to decode. Few people would think of cowl as a synonym for a head-cover, or consider that the noun was transmuted from the verb cover. The trail of double negatives surrounding this Nancy Pelosi story is hard to follow even without the article spinning. It started as a satire story, which ALLOD followed with a satirical fact check on their own story. Then, that story was plagiarized and republished, and then spun and republished again. Lead Stories had to step in to clarify with a real fact check about the stolen satirical version. Read about it here. 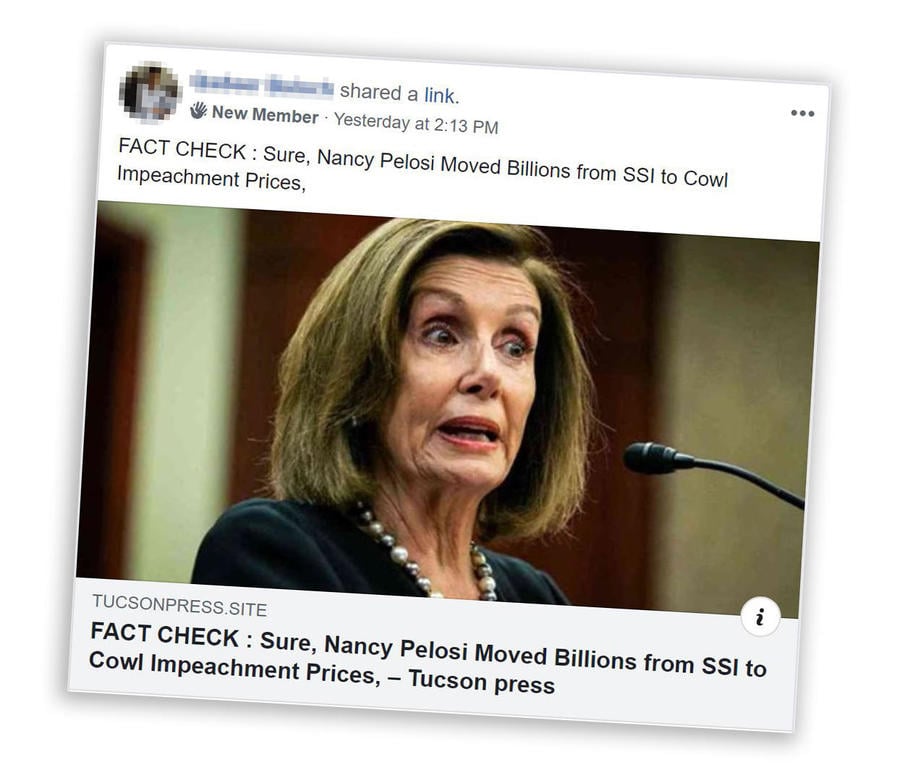 Tusconpress.site showed up on Facebook on February 16, 2020. It's not the only one of these websites with a name that sounds like a local American news outlet. Clickbaiter Kashif Shahzad Khokhar, who goes by the name Dashikashi online, had quite a run last summer with scores of sites based off the name 'OregonNewsPress'.

Meanwhile, Texasdaily.pro, Portlandpress.pw, Dakotanews.pw, Phoenixdaily.club, Chicagodaily.pro - all run by Dashikashi - are domains that have recently been banned from the Facebook platform. Only a small portion of the bogus sites have American place names. Other sites have names that are not at all reflective of the political content they publish. There's triathlondaily.com, 2020happynewyearimages.com, onlinelawfirm.win, hostquit.com and dachshunddaily.com.

A web search for "article spinner" will bring up many sites offering this service, sometimes calling it an article rewriter or a word spinner, and promising "unique content." While they offer a service like a thesaurus, it seems that they may lack a dictionary, as their understanding of plagiarism is faulty, inadequate or incomplete.

"... the general concept and meaning of the original text remains intact while the wording is changed to make the text unique and plagiarism free."

transitive verb
: to steal and pass off (the ideas or words of another) as one's own : use (another's production) without crediting the source

intransitive verb
: to commit literary theft : present as new and original an idea or product derived from an existing source

Let's try one out, using the fourth paragraph of this story. Lead Stories picked a spinner randomly from the search results and plugged a paragraph of our own writing into the tool at Rewriter Tools. In a few seconds, we had a perfect example of what we had tried to describe.

Have you ever ever encountered a piece of writing that just appeared a bit off? The structure of the object movements along commonly, with sentences and paragraphs however every occasionally you stumble on a unusual phrase or an idiom that appears out of vicinity?

The namesake tool of the website, called a re-writer, highlights words in the text and offers alternatives. These must be chosen by hand. This allows a person to have more control of the substitutions as well as the frequency of substituted words. This should result in a higher quality, more legible outcome than a simple spinner. Yet, the clickbaiters targeting American audiences - using stolen user profiles and an autoposter to inject stolen content into the bottom tier of unmoderated, frequently foreign-run Facebook groups - are just using a spinner. 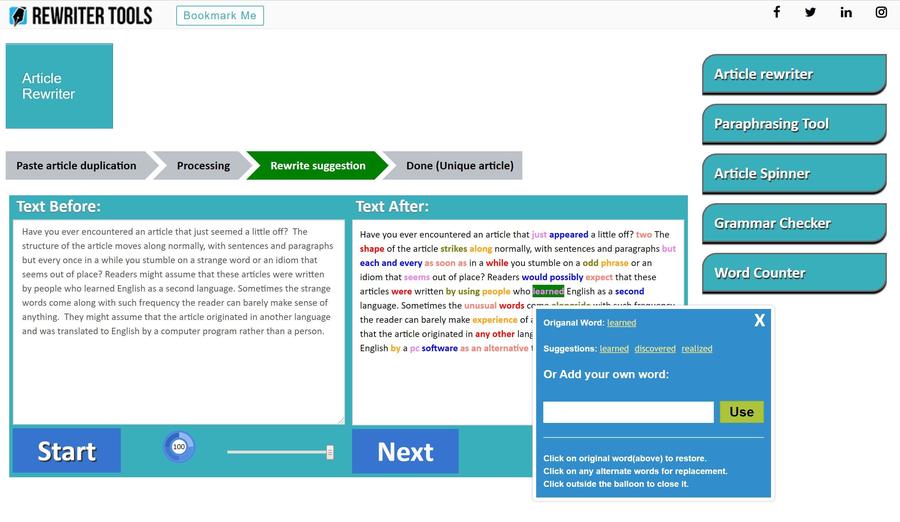 For a funny read of a large block of spun text, little can match this copy of Dennis Diehl's 2006 blogpost. Diehl's original, 'News Until You Puke' appeared on 'ezineArticles'. The new title is 'Info Until You Puke', and the spun text was published by forextradequeen.com.

'Information' or 'Info' usually went into the spinner as the word 'News'. But the dictionary tells us 'Files' are another place 'Information' is found, and file can also be a verb. That's how NewsThud's headline, which was "Bill Barr Cracks Down On Sanctuary Cities, Warns of Criminal Charges Against Dem Politicians, Files Multiple Lawsuits", turned into this: 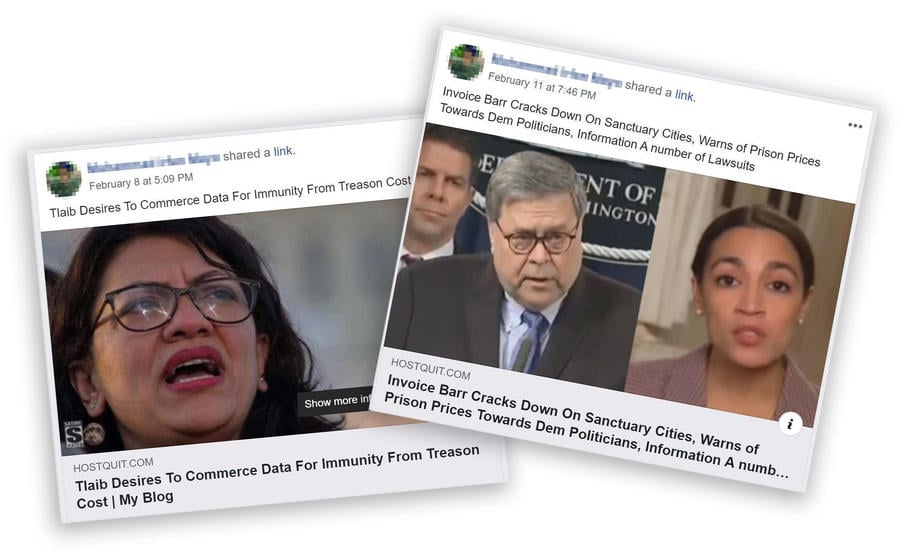 Both 'cost' and 'prices' no matter how high, can refer to 'charges', but they're not usually the criminal kind. The original satire headline from ALLOD (here) read, "Tlaib Wants To Trade Information For Immunity From Treason Charge"

'Profit' in this case is a 'Benefit'. The original ALLOD headline read: "Nancy Pelosi Asked To Leave Children's Benefit After Drunken Outburst". 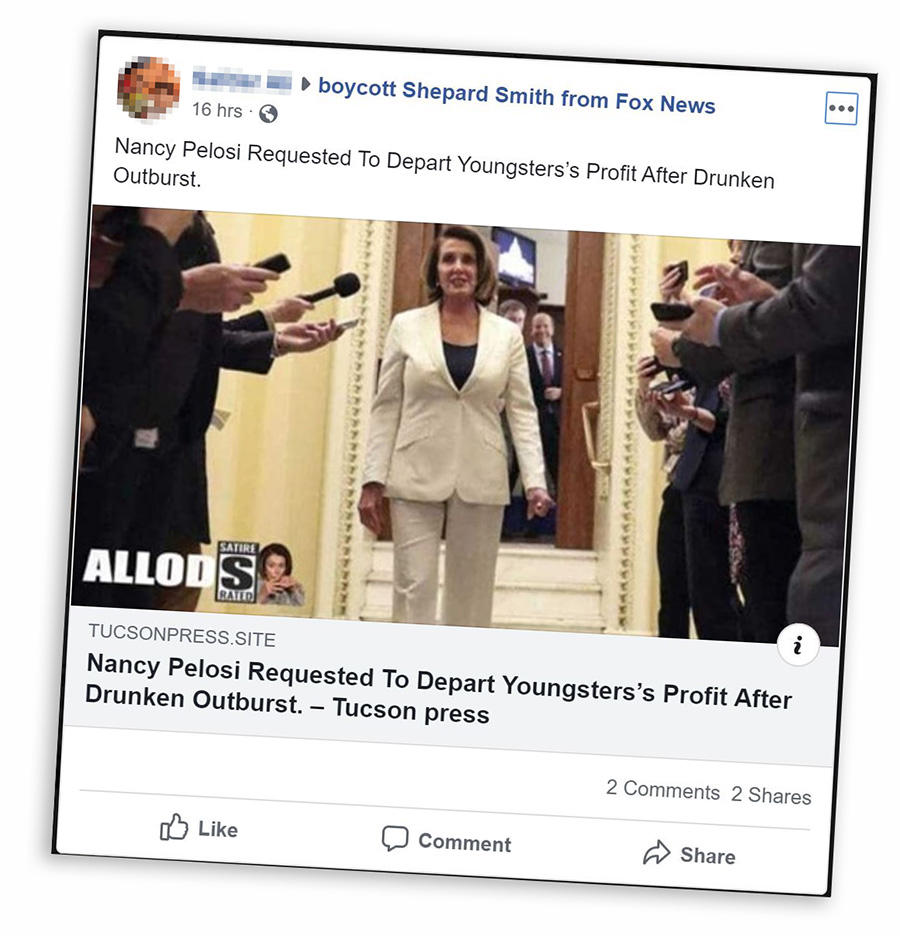 The original headline from ALLOD's Bustatroll.org (here) said: "Caught On Hot Mic, Pelosi Says 'Americans Are The Stupidest People On Earth'". The headline was then spun into many variations, with either 'Sizzling' or 'Scorching' for 'Hot' and an assortment of words for 'Americans' and 'people'. 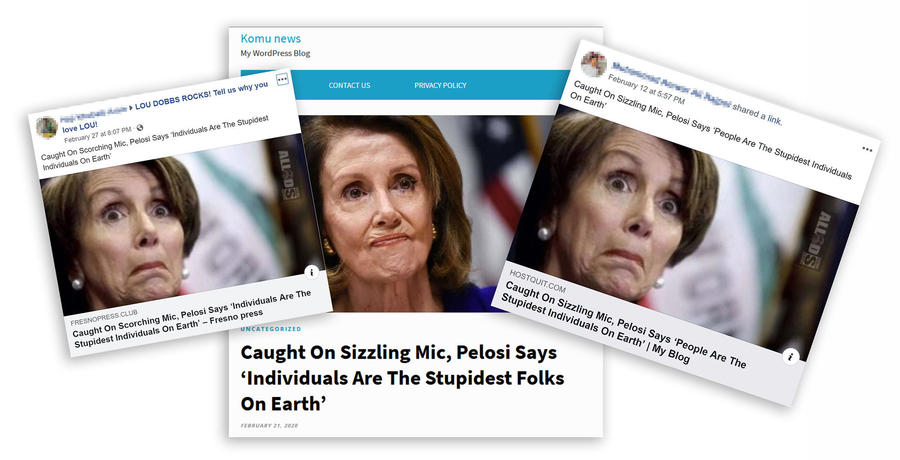 A 'Mannequin' might mean a 'model', either the person or the example. 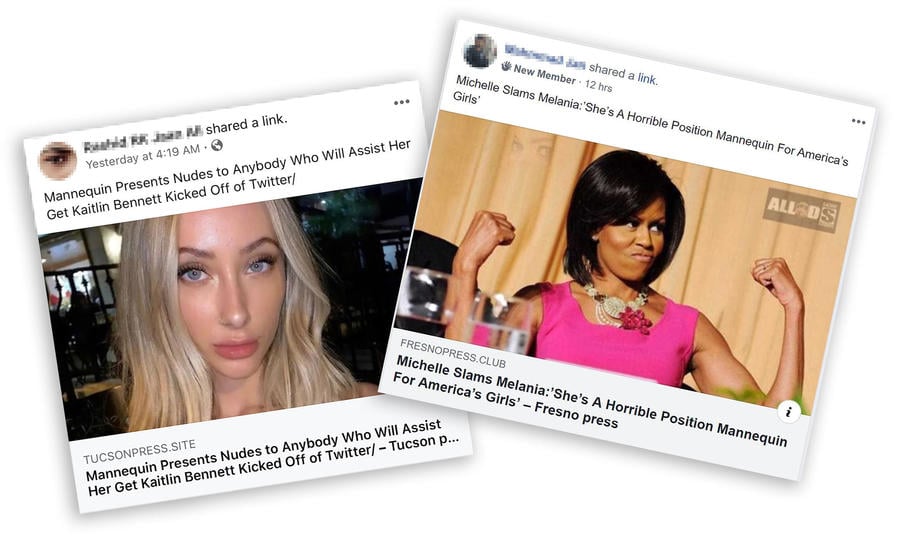 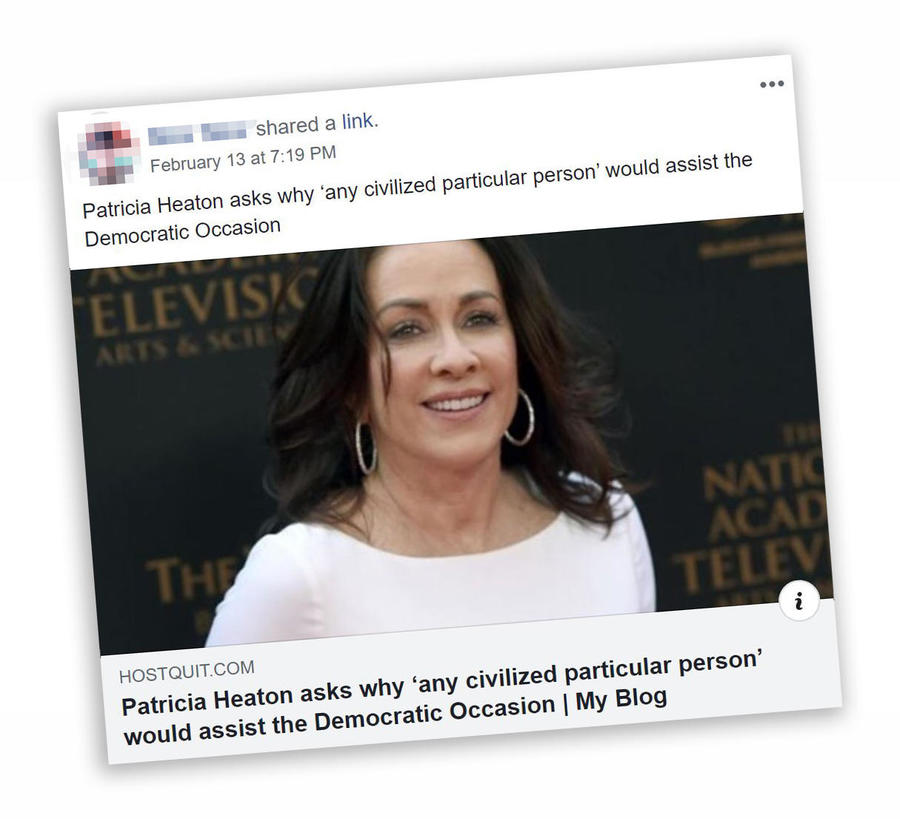 A first girl???? and a previous woman. 'Previous' shows up quite a bit, usually in the place of the word 'old'. 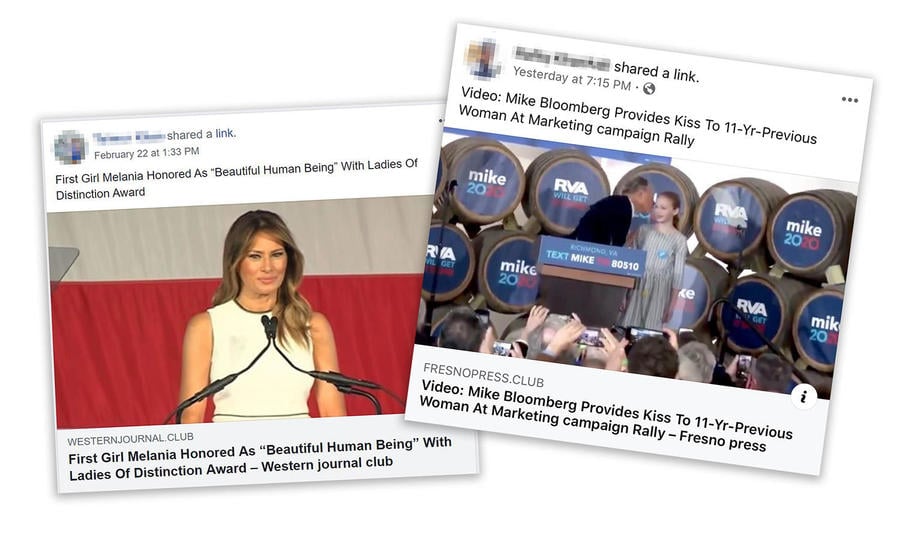 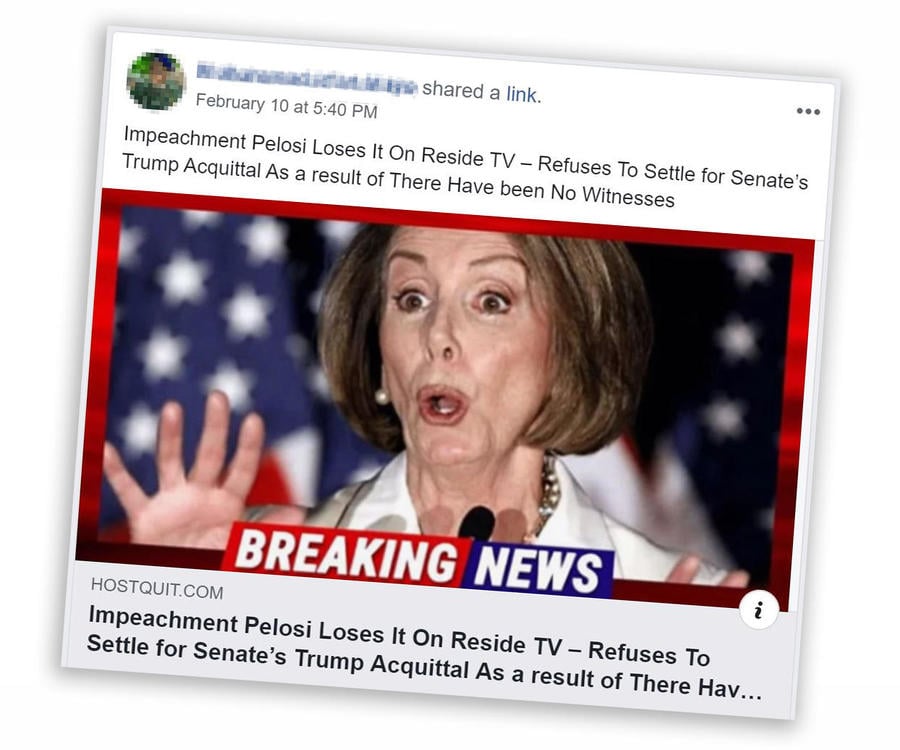 Other words are used to form a question, but they don't always make sense, Which is why "Ought to" just can't replace "Should" in this instance. 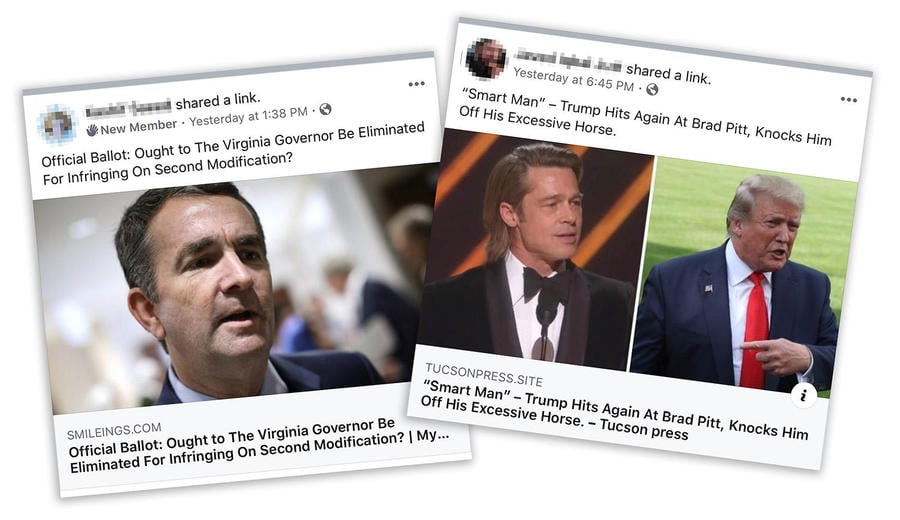 The original headline on the website of the Western Journal article read, "Trump Sets NH Record for Most Votes for an Incumbent, Doubles Obama's 2012 Performance." 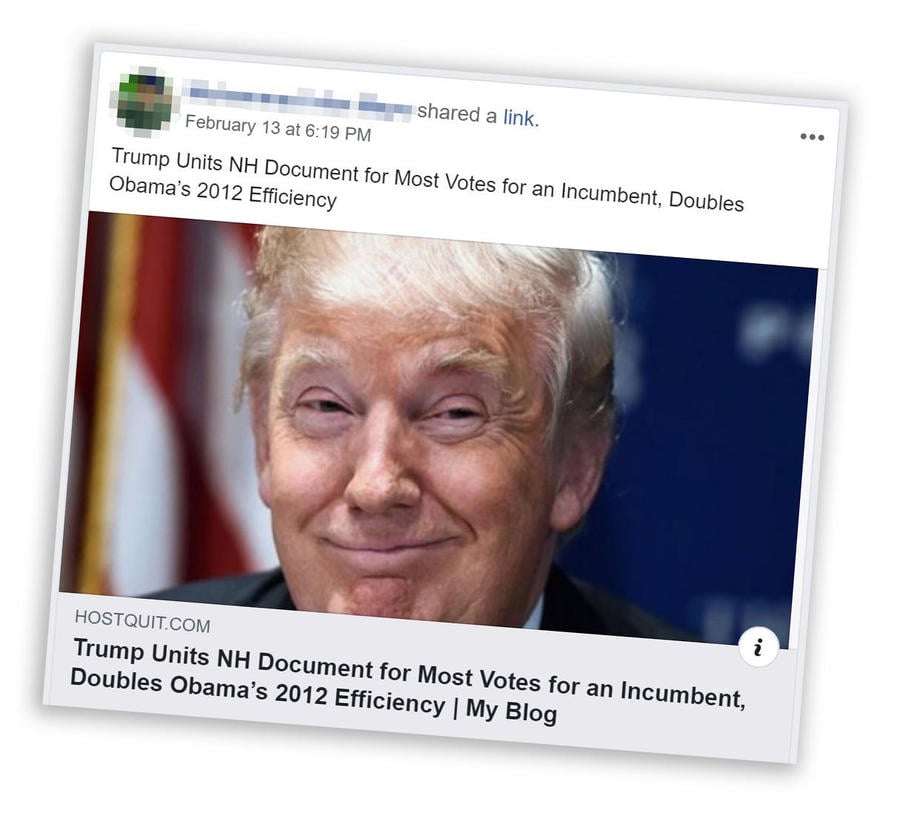 While these spun headlines are good for a laugh, the overall implications are quite serious at a highly charged political time.

(This article explains a little about article spinning, as well as provides a small glossary of words to help decode some of the perplexing headlines currently circulating on Facebook. Although links to some of the original articles are included, due to the malicious pop-up ad tactics of the bogus websites, the examples of spinning in the plagiarized copies are limited to screenshots. The names and faces of the people whose profiles posted these links are blurred for their privacy. The hijacked accounts doing this spamming are mostly from people in Pakistan and India, but also in African countries. Recently, accounts from Armenia have been showing up and putting links in U.S. political Facebook groups. Their Facebook accounts have taken over by clickbaiter Kashif Shahzad Khokhar, who goes by the nickname DashiKashi on his websites. And the people whose groups were infliltrated by him were not willing participants in the spamming scheme. Politifact recently published an in-depth article about this clickbaiter.

In our next analysis piece we will look more at the problem of foreign networks focused on American politics currently operating in plain sight on Facebook.)