Two weeks before strict nationwide coronavirus lockdown measures were announced in Britain, Abbie had already been practicing the recommended social distancing. In her flat in the southwest of England, she had plenty of projects in the works and was coping quite well in isolation.

She worked on some paintings, took photos of her favorite subject - books. She made some YouTube videos and did some livestreams on Instagram. She even found time to do some reading. 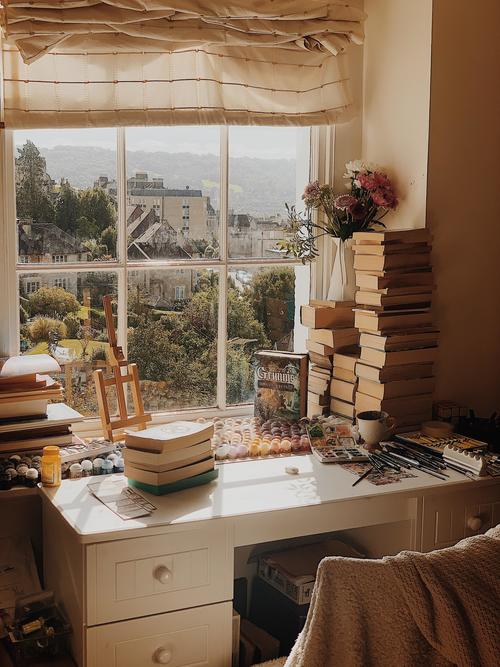 Her self-determined occupation springs from the things she loves - books and art. For five years, she has tended to her Instagram accounts like a gardener. Those years of care and dedication have paid off with large followings of like-minded people who have grown into a community. She made connections with authors, publishers and many other people who love books.

As her Instagram following @britishbookreader has grown, so did her dreams of publishing a book of her own one day.

There is one more common thread that runs through Abbie's work, and that is advocacy for mental health. She has worked to make her Instagram content welcoming, calming and inspirational for people who may struggle with anxiety, depression or loneliness.

Your content always cheers me up, especially your recent animal crossing videos haha :-). Your pictures inspire me to read more, especially now. Things have been really hard for everyone. And to top it off for me, I've just been diagnosed with autism. Being Autistic makes it hard to make friends. I have no friends at all. I always sit by myself at school... and I know it sounds stupid, but I consider online people like you a friend because I enjoy your content..."

... I just wanted to tell you that if you are ever feeling down just remember that you inspire a lot of people, myself included."

Messages like these mean much to Abbie, and this calm, lovely, bookish retreat that she has been cultivating seemed like it was perfectly poised to play a supporting role during the stressful times of the coronavirus lockdown that went into effect on March 25, 2020.

At about 11:00 p.m. on the 27th, Abbie checked her Instagram one last time before turning in for the night. When she awoke on the 28th she received a concerned message from a friend:

From there, she felt her world drop away as she traced the problem of her disabled Instagram accounts back to the Facebook account they were associated with. There, she found a small pile of urgent messages from Facebook that had been generated by a security system registering a full-blown attack. Those messages had gone unanswered during the night while Abbie slept.

One round of questioning flashed past quickly as she tried to grasp what had happened. The subjects of the questions were irretrievable once she answered "No" and "No" to the questions about having added some unknown woman as a friend, and having posted some "Warning Coronavirus", or something similar. Just like that, the questions were gone and her response - that this was not her doing - had no effect on the outcome. 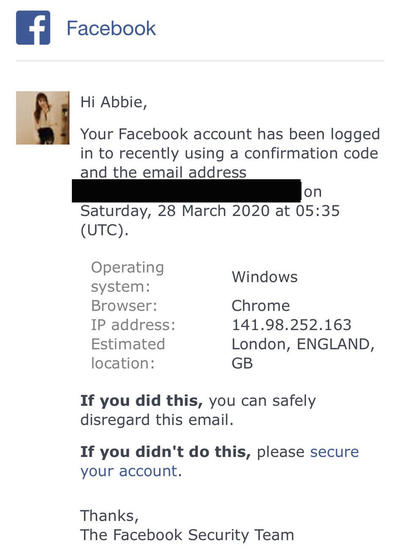 Since then, Abbie's world has been turned upside down. Facebook was the main way she kept contact with her mother. She can't communicate with most of her friends, and she's very worried now about the people who can't communicate with her. What they are thinking when they can't find her Instagram account? Her anxiety has gone through the roof as her personal and professional connections, and the years of community building and design work, are now erased. 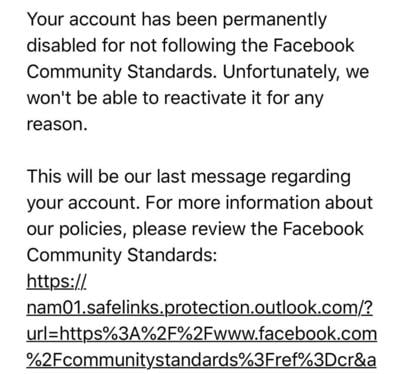 Lead Stories can not say for sure what Abbie's stolen Facebook account sent out, as she wasn't able to catch it in a screenshot. We found this post (unrelated to Abbie) - a warning to friends from March 26 about a number of suspicious things that this user was getting through messenger.

We suspect that, after the hacker was able to reset Abbie's password, Abbie's account was involved with a similar type of automated spamming wrapped in COVID-19 trappings that this other Facebook user observed: 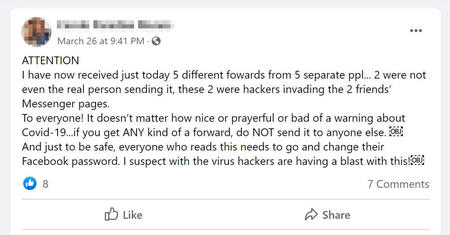 Although Facebook's ability to detect fake accounts has seeimingly improved over time, the various reasons and ways that hijackers use inauthentic accounts have not been eliminated.

This means that the value of accounts stolen from real people has risen as the ability to game the system with a fabricated account has gone down. Rather than making the platform safer for users by reducing the number of fake accounts circulating, actions against fake accounts have turned the precious accounts of real people into a commodity that the account hijackers need.

Romance scams and spamming - the clickbait ecosystem depends on thousands of hijacked accounts. Every screenshot of spamming included in our recent Article Spinning analysis features the blurred name and profile picture from a victim of identity theft.

That a system could generate a torrent of security emails after having picked up on signals that an account was under attack could, less than one day later, generate an automated cold shoulder toward the victim of a hack. Consider: 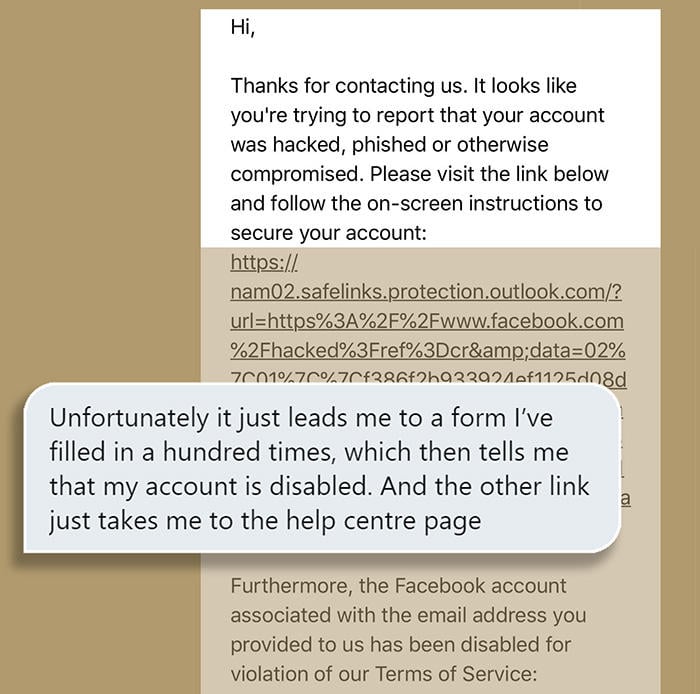 Every unanswered plea from a victim of an account hijacking is not only is causing disruption and loss for the person whose account was taken. It also ignores that a hijacker took the account for some devious - often profitable - reason, and they are getting away with it.

Lead Storires is curious if something like this has ever happened to you? Do you know how your account was compromised? If so, what did the bad guys do with your account, and were you ever able to get it back? We would love to hear from you.