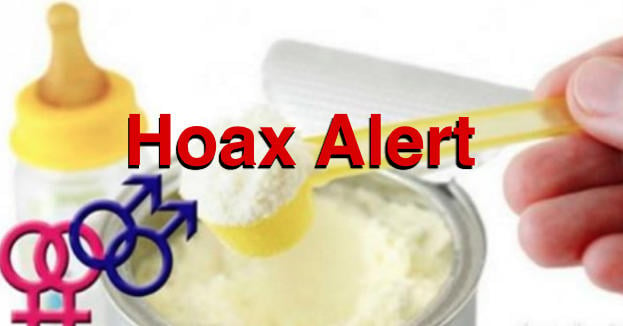 Lead Stories' Trendolizer has detected a HOAX story that is making its rounds on social media. This particular hoax claims that scientists at Cambridge University have linked homosexuality to the use of baby formula. The article published by known hoax/satire website, iammedia101.com, holds NO TRUTH whatsoever.

Scientist at the University of Cambridge have discovered a correlation between babies being fed baby formula and their likelihood to become homosexual. The study was conducted over a 20 year period which has produced astonishing results linking homosexuality and a particular chemical found in many popular baby formulas.

First off, Cambridge scientists have done no such study as detailed in this article. They have indeed done studies on infants who are fed formula versus those who are breastfed, but those studies last only a couple years at most, and have nothing to do with sexual orientation.

One of the main claims in the untrue article is that potassium hydroxide is the cause of the alleged homosexuality. Although there has been much debate over whether this chemical is safe to use as a food additive, there is no science linking it to "catching the gay".

The alleged study is accredited to "Dr. Haggerton" of the University of Cambridge. There is no such employee at Cambridge, according to this complete staff contact list.

Again, this story is not true... baby formula HAS NOT been linked to homosexuality. This story was published to appear legitimate and create controversy.

Lead Stories' Trendolizer™ is constantly scouring the web for the most trending news, videos, and viral stories.