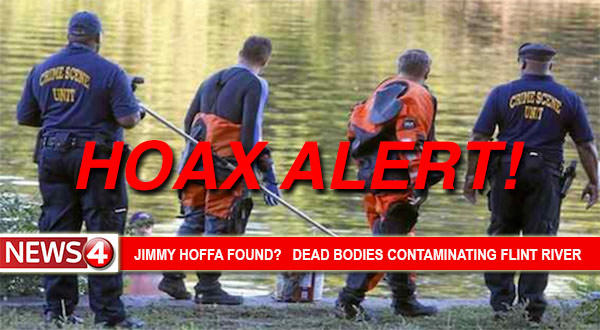 There has been a nasty HOAX story trending on the internet for nearly a month now stating "22 Dead Bodies Discovered In Flint River Found To Be The Source Of Water Contamination." Lead Stories didn't debunk the NOT TRUE story when it originally was posted because we thought that it was too far fetched for anyone to actually believe. Not the case. The HOAX story comes from a site that is trying to pass itself off as legit, which it is not.

A little piece of the NOT TRUE story:

Authorities say roughly 11 million liters of state purchased water have been distributed to Flint residents since the emergency was declared in January over the cities tainted drinking water. However, a grisly discovery was made on Friday morning when surveyors discovered 22 bodies at the bottom of the lake weighed down by concrete blocks and chains. "There's a lot of discussion between the detectives and the coroner's office that one of these bodies just might be the remains of Jimmy Hoffa," said Lieut. Milton Cramer.

Obviously, the HOAX story is based on the fact that earlier this year Flint, Michigan was in the midst of a water crisis. Though the tainted water had been pouring through residents' water faucets for the past two years, officials never publicly acknowledged it until January 2016. As far as debunking facts, News4KTLA is a FAKE site using the handle of a legitimate site, KTLA.com. Also, Lieut. Milton Cramer does not show up on any list of employees for the Flint, Michigan police department.

Instead of continuing to share the HOAX story, share this story with your friends and let them know the TRUTH.