There is HOAX story trending on the internet stating "Woman Says She's Pregnant By Black Man From Toilet Paper Contaminated with Semen." The story comes from a known satire and hoax site but some people only read the title and unknowingly share the HOAX.

A little of the NOT TRUE story:

An Alabama woman claims she became pregnant with an "unknown man's" baby after using a 'porta potty' at the county fair. Britney Thomas, 18, explains the peculiar event: "I used the porta potty at the fair last year after someone else was using it. I found some semen left behind on the floor by the previous user. The toilet paper roll was placed on the ground too. I believe that when I was using the toilet paper to wipe myself off it was contaminated by the semen on the ground. Now, I just gave birth to a healthy baby boy with dark skin.

Though not 100% impossible, the probability of being inseminated in this manner is highly unlikely. Sperm has about a 20 minute life expectancy outside the body. The sketch image used in the NOT TRUE story is actually of a "suspect in the 2015 shooting death of an Oregon man." As for the image of the porta potties, it comes from this 2012 article titled "Johnny on the Spot: Porta Potty Rentals at Lawrence Co. Fair," and has been used in many stories since. 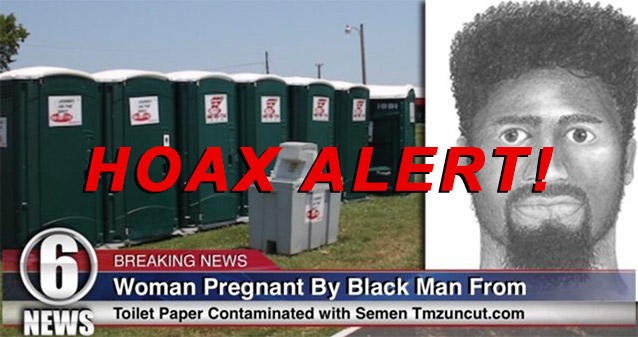