UPDATE July 13th 2017: A new version of this hoax is going around, read about it here.

Fake news website news.sharedtodaytv.com (which redirects to rugimanen.dailynewztags.co) went viral with a hoax article titled: "FOX BREAKING NEWS : Mr. Bean (Rowan Atkinson) died at 58 after car accident. -March 18, 2017." The story is nothing more than that headline plus a video player that tries to trick visitors into installing dodgy software and/or liking/sharing the story in order to continue watching. Update: meanwhile the hoax seems to be hosted on tnp.dailyshareds.com as well. Another Update: See here for a full technical analysis of the hoax. 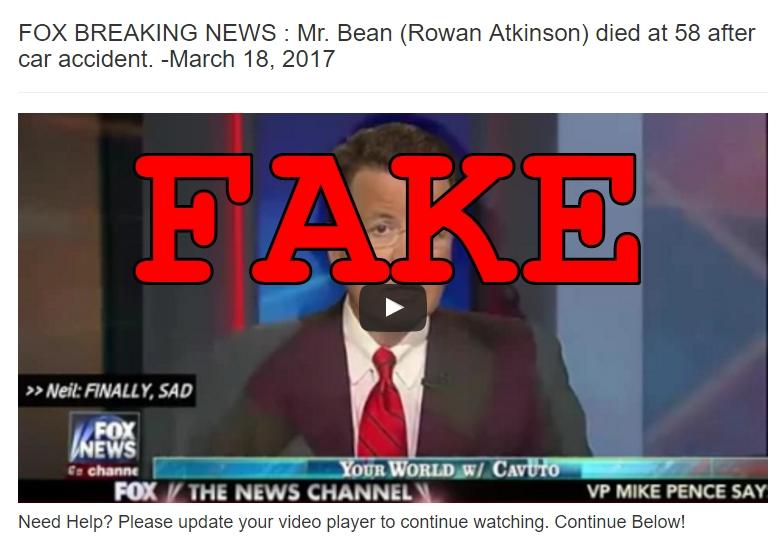 It appears the story is a variation on an earlier hoax from July 2016 that also claimed the comedian died in a car crash that might also have been a suicide. A cached version of that story is available at rip.trendolizer.com. This version of the story attributed CNN as the source while the 'new' version of the hoax claims it was Fox News. However a search of the Fox News website for "Rowan Atkinson Dead" returns no relevant results. Also: neither Atkinson's Wikipedia page nor any reputable media outlets have confirmed the story so it is definitely not true.

It appears the current iteration of the hoax is being spread via several different URLs and domain names, probably in an effort to avoid detection and blocking measures at Facebook.

The video the site tries to play actually comes from YouTube and is a tribute to Brenda Buttner, a Fox News host who passed away on February 20th 2017.

It seems the booby trapped video player on the hoax sites tricked thousands of people into sharing the fake story with their friends as you can see in the Trendolizer graph at the end of this article. If you notice anyone of your friends sharing the hoax, send them here and tell them to run a malware/virus scan on their computer just to be safe.