A fake news website with a misleading URL trying to pass itself as The Guardian (http://theguard1an.com) posted a hoax article titled: "BREAKING NEWS: Queen Elizabeth II is Dead". This follows on the (real) news that there was an unexpected meeting for all royal household staff at Buckingham palace earlier this morning and rampant speculation on Twitter what it was all about. 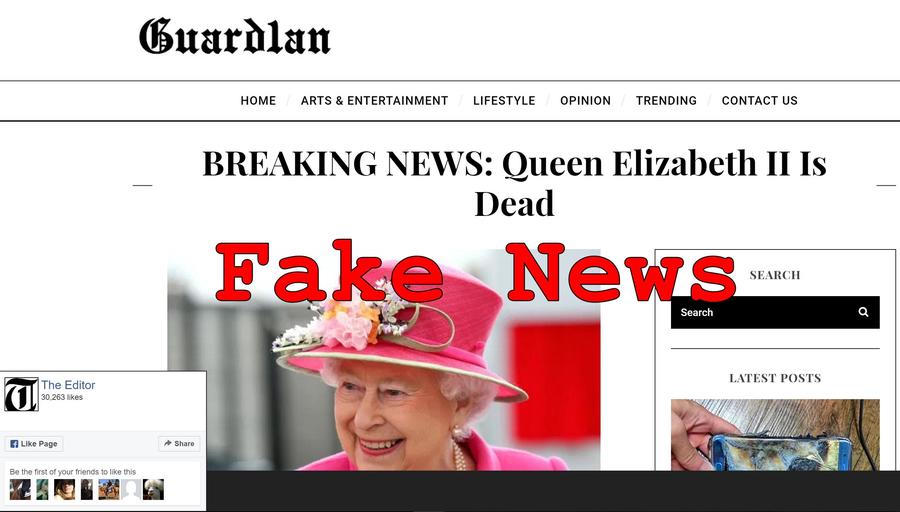 However the BBC already reportedt:

The BBC's royal correspondent Peter Hunt understands the meeting is not about the health of either the Queen or Duke of Edinburgh.
Officials at the palace have not said what this morning's meeting, reported to involve all senior staff from across the UK, is about.

The fake Guardian site appears to be part of a network of fake news websites that all have normal looking front pages with some generic news stories taken from other websites but which frequently publish hoax articles on other parts of the site that aren't immediately obvious to visitors. Some other sites we've identified as apparently being part of the network include:

All these sites promote the same Facebook page: https://www.facebook.com/The-Editor-283812522002681 so it is likely they are owned by the same group or person.

Meanwhile the Queen Elizabeth death hoax is already being passed around on Facebook as you can see in the Trendolizer graph at the end of this article. If you notice anyone spreading the rumor around you can help by pointing them to this article here because nobody likes fake news.