Xi Ping Chow, a 57-year-old Chinese immigrant, has been arrested by the NYPD this week after authorities were informed that the man was making his own hot dogs with the meat of stray dogs in the area.

NYC food inspectors were anonymously tipped on Chow's operation which possibly involved recuperating dead dogs in dumpsters of the Animal Care Centers all over the city report officials.

The article is accompanied by an image of an Asian man being arrested: 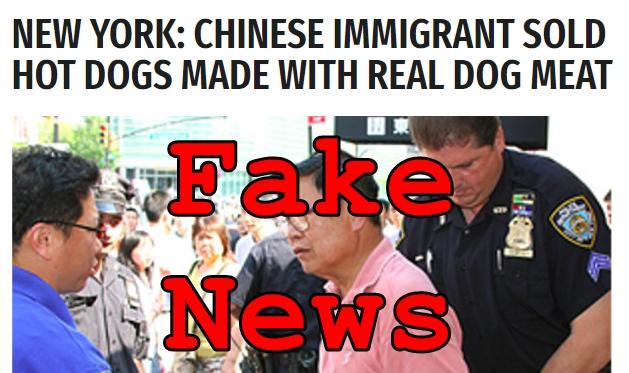 This image is actually of a man named Wei Qui who was arrested for assaulting a Falun Gong practitioner in Flushing in 2008. The rest of the story isn't true either: the website World News Daily Report is a well known hoax website specialized in posting hoaxes and made up stories. The disclaimer on their website is pretty clear about that even though you have to scroll all the way down the page to find it:

The racially charged hoax is being shared by thousands on Facebook as you can see in the Trendolizer graph at the end of this article. If you notice anyone spreading it do send them over here because nobody likes people spreading racist fake news because they believe it is real.