Known fake news website WorldNewsDailyReport came out with another hoax article, titled "Gang member dies in prison after smuggling M-16 in his anus".

Los Angeles, CA | A Latino gang member who tried to smuggle drugs and an M-16 into prison after he was arrested this week has died of his injuries reports the Los Angeles Chronicle.

The man that is believed to be part of the notorious El Salvador-based MS-13 crime organization, also known as Mara Salvatrucha, has died from internal bleeding after he told the medical staff at the California State Prison of Los Angeles County (LAC) he had tried to smuggle the barrel of an M-16 inside his rectum. 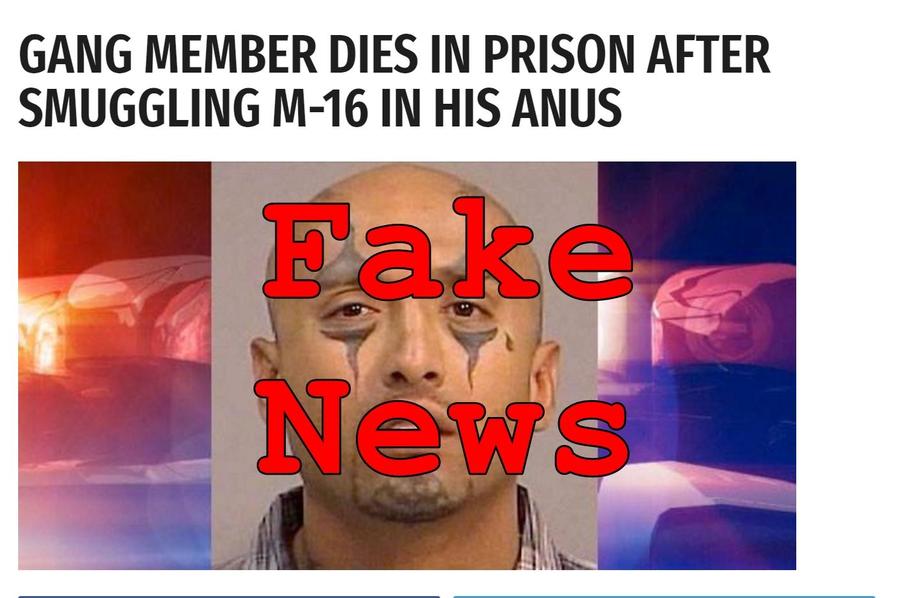 There are several reasons why this article is fake. First of all, an M-16 barrel is 20 inches long (half a metre), making it quite unlikely to 'fit' in the anatomical area mentioned in the article.

Secondly, the mugshot of the gang member is the second one that comes up if you google 'gangster face tattoos'. It is taken from the Pinal County Sherrif's Office, which is in Arizona, nowhere near Los Angeles. And lastly, the website World News Daily Report is a well known hoax website specialized in posting hoaxes and made up stories. The disclaimer on their website is pretty clear about that even though you have to scroll all the way down the page to find it: