A website named Junta Ka Reporter published an article on July 4th titled "UNESCO declares Islam as the most peaceful religion of the world" which was later copied by TEO Info and other unreliable websites. The fake story opened:

PARIS: In a major development that should silence critics of Islam who have been blaming it for terrorism, UNESCO has declared that Islam is the most peaceful religion of the world.

The United Nations body released a statement earlier today that revealed that UNESCO had partnered with International Peace Foundation six months back to study all religions of the world and find out which was most peaceful amongst all.

"After six months of rigorous study and analysis, we have concluded that Islam is the most peaceful religion," Robert McGee, head of comparative studies wing of International Peace Foundation declared in a press conference that was attended by UNESCO officials too.

The article was accompanied by an image purporting to be a "Certificate of Peace": 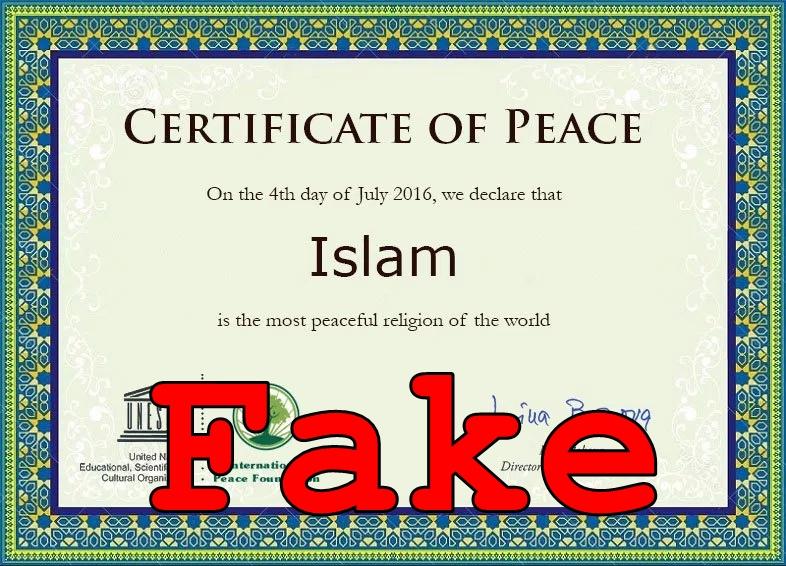 The entire story is false as confirmed by a press release of UNESCO which reads:

We wish to refer to the recent allegations posted on the website juntakareporter, citing an alleged statement and certificate from UNESCO declaring "Islam as the most peaceful religion of the world". Such statement was never made by the Organization and that the certificate reproduced on this website is a fake one. The website that published this information is a satirical media.

UNESCO has never had any official relationship with the entity referred to as "International Peace Foundation", nor has it ever supported such a statement or granted any diploma of this kind.

In line with its mandate, the Organization has the responsibility to promote interreligious and intercultural dialogue on a global scale, with the unerring support of its Member States, partners and networks. In doing so, UNESCO promotes respect on equal grounds for all traditions and faiths, always striving to build bridges and strengthen ties whenever possible.

Disclaimer
You seriously believe this shit is real? Before you sue us, do a favor to your intelligence and realize that it is a satire website. Everything published here is made up. But if you are still that stupid and hurt, we are sorry.

Despite this warning it looks like hundreds of thousands of people have already liked and shared the story. Currently the version on Teo Info is trending as you can see in the Trendolizer graph at the end of this article. If you see anyone you know getting fooled by an article copied from a satire website do send them here for a dose of reality...