Satirical website ClickHole had a major viral hit going with an article titled "PR Nightmare: Make-A-Wish Accidentally Sent A Costumed Hero Named Terminally Ill Spider-Man To A Healthy Kid's House And Asked The Child To Comfort Him In His Final Hours". It opened:

Yeesh, the Make-A-Wish Foundation is not looking too good right now.

The nonprofit organization usually does an excellent job of making sick kids happy, but earlier this week a clerical error really threw a wrench into things for them. Instead of sending Spider-Man to visit a terminally ill child, they arranged for a completely healthy child to meet with a superhero named Terminally Ill Spiderman.

It's an understandable mistake, but it still ruined an afternoon for healthy 8-year-old Michael Cooper, who heard a feeble knocking at his door announcing the unexpected arrival of a gaunt and shivering Terminally Ill Spider-Man. The incredibly unwell wall-crawler declared that he was on his way to hospice but needed to stop at Michael's house to use the bathroom. The superhero asked Michael to help pull his mask up so he could vomit into the toilet without getting his costume filthy, and after retching up blood for several minutes, he asked to lie down on Michael's bed to regain his energy while huffing from an oxygen tank.

Of course the story is not true. 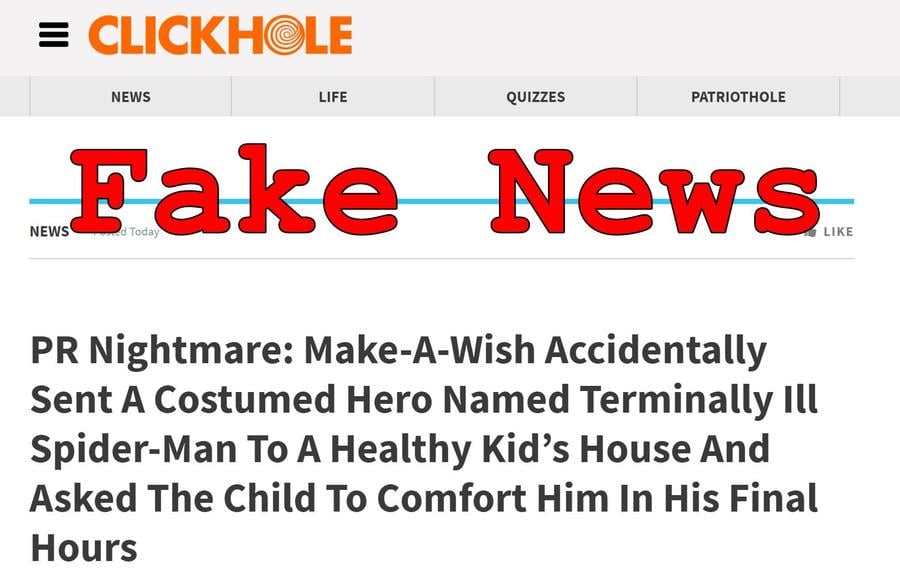 ClickHole is a satirical website run by the same people as The Onion that carries a well hidden disclaimer on its about page:

Let's be honest: Today, the average website carelessly churns out hundreds of pieces of pandering, misleading content, most of which tragically fall short of going viral.

At ClickHole, we refuse to stand for this. We strive to make sure that all of our content panders to and misleads our readers just enough to make it go viral. You see, we don't think anything on the internet should ever have to settle for mere tens of thousands of pageviews. We believe that each and every article--whether about pop culture, politics, internet trends, or social justice--should be clicked on and shared by hundreds of millions of internet users before they can even comprehend what they just read.

Obviously many people didn't even click through to the article before sharing it and the majority of the people who did click through probably didn't bother to go hunting for the disclaimer. That probably explains why the story is being shared around widely as you can see in the Trendolizer graph at the end of this article. If you notice anyone spreading the hoax around while thinking it is true you can help by pointing them to this article.