The fake/satire website Our Land of The Free has been posting a series of articles about Nancy Pelosi being involved in a car crash:

It looks like the story was also picked up on Daily News Explorer:

(Knowing these kinds of sites we would't be surprised if a fourth article pops up soon claiming Pelosi died in the car crash...)

UPDATE: The fake saga has been updated with a story titled "BREAKING: Nancy Pelosi Kills Herself In Hospital Bed", more or less as expected...

Democrat Senator Nancy Pelosi was involved in a car crash yesterday in her home state of California after a town hall event where she once again accused Donald Trump of "colluding with Russia."

According to the West Los Angeles Police Department, wine was served at the event and Pelosi...well, she's Nancy Pelosi so she drank a ridiculous amount of it.

Sgt. Bruce Bahner says that Pelosi's driver was sick so she decided to drive herself back to her 3.8 million dollar mansion, but with a blood alcohol content of 1.3 she didn't get very far before she randomly accelerated, went off the road, and slammed into the side of a city bus. Pelosi was not wearing a seatbelt and flew through the windshield, slamming her head into the side of the bus. She is currently in intensive care at St. Myrtle's Regional Hospital.

Of course the story is not true. For one thing the accident photo used to illustrate the story is from a 2016 crash that happened in the U.K. (and that car crashed into a house, not into a bus). Also the windshield doesn't seem to have a big hole so it seems unlikely that Pelosi flew through it. 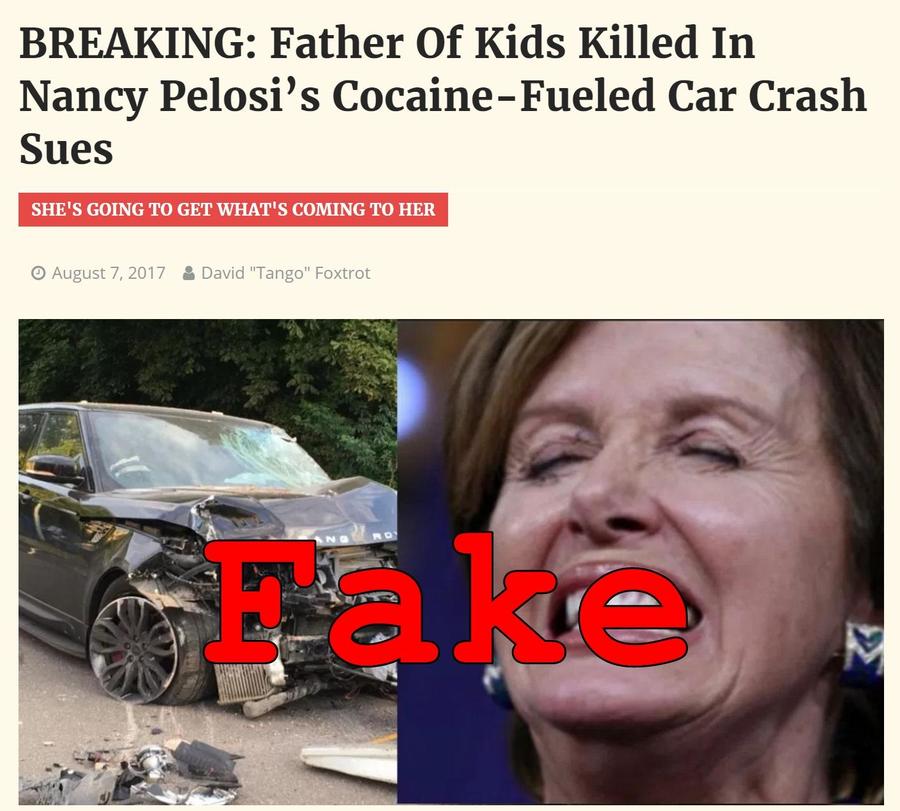 In addition Our Land of the Free sports following disclaimer at the bottom of each page:

Daily News Explorer also has a disclaimer page that reads:

DISCLAIMER: DailyNewsExplorer.com is a satirical publication that may sometimes appear to be telling the truth. We assure you that's not the case. We present fiction as fact and our sources don't actually exist. Names that represent actual people and places are purely coincidental and all images should be considered altered and do not in any way depict reality. All people, places, names, and images should be considered fictitious or fictitious representations.

Seems like this is just another ploy to get less intelligent conservatives to share/like a story that is nothing but a crude wish fulfillment fantasy. If you look at the Trendolizer graph at the end of this article you'll notice it appears to be working. If you don't like people being taken advantage of by unscrupulous websites hoping to cash in on advertising dollars feel free to go ahead and warn people by sending them the link to this article.