The man accused of being a neo-Nazi and murdering a woman by deliberately driving into her during protests in Charlottesville is in reality a supporter of Hillary Clinton and member of Antifa in receipt of funding by George Soros, according to reports.

James Fields, 20, of Maumee, Ohio, allegedly killed Heather Heyer, aged 32, and injured 19 others when he rammed his car into a group of protesters on Saturday in Charlottesville, Virginia.

Mainstream media is claiming Fields is a neo-Nazi and has conveniently produced photographs showing Fields standing with Vanguard America and carrying a shield bearing the group's insignia.

But the mainstream media is actively suppressing information that proves Fields is actually a left-wing operative at the heart of a false flag designed to spark civil war, introduce martial law, and take away the rights of conservative groups to assemble peacefully. 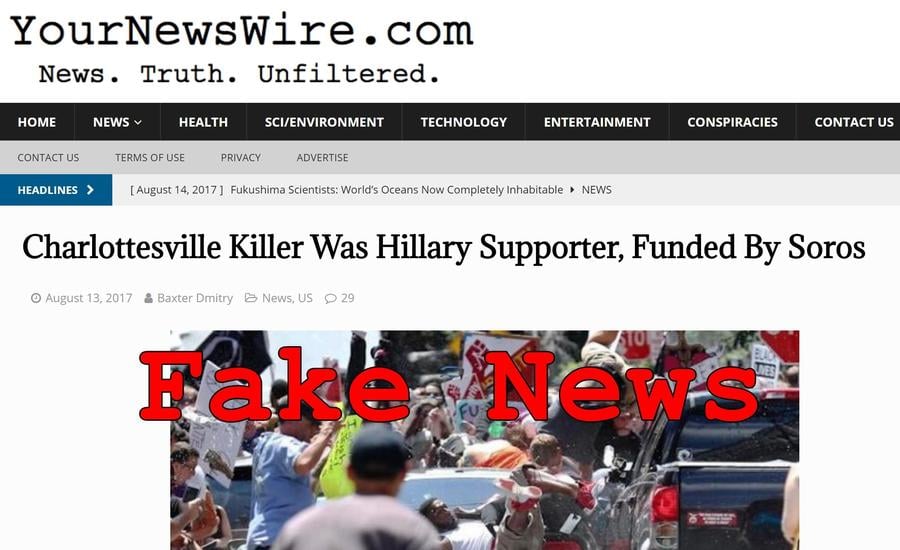 The article then completely fails to provide any evidence or information to prove that "Fields is actually a left-wing operative", besides invoking some general conspiracy theories about the whole Charlottesville protest & violence being part of some elaborate setup (parts of which may or may not be true, we are not judging on that part... yet) but there is no evidence in the article linking Fields to any of it.

What we do know is that YourNewsWire is a site that frequently invents news in order to profit of gullible people clicking on their sensationalist headlines. Some examples of stories from that site we've debunked in the past include:

So if you ask us this is just another example of a fake news website trying to make a quick buck by exploiting gullible people on the internet after a tragedy. We'd advise everybody to take the entire story with a big grain of salt until actual verified evidence shows up. Feel free to leave evidence in the comments if you have any.

Thousands of people seem to be sharing this rather serious accusation around without actually examining the evidence as the Trendolizer graph at the end of this article shows. Don't be one of them.