What do Gary from Starkville, Mississippi, Mark from Clarksburg, West Virginia, Daniel from Singapore and another Gary from Killeen, Texas have in common? According to various fake news websites they all have the longest penis in the world, measuring in at exactly 19.1 inches (48,5 cm).

The articles are all titled something like "[CITY], [STATE] Man Sets New Record For The Longest Penis In The World" and open like this:

A [AGE]-year old man from [CITY], [STATE] now officially has the world's longest penis after he was measured by the world record authority at his home earlier this week.

The new world record holder, who requested to be identified only as [NAME] to protect his identity, spoke to journalists at a press conference held after the measurement ceremony. "I am just thrilled at this, as you can imagine,' he said.

Prior to [NAME]'s record breaking measurement, the world's longest penis was a title held by Mexican man Roberto Esquivel Cabrera, who set the record with a measurement of 18.9 inches (48.1 cm) back in 2015. Since then, many men around the world have attempted to take the crown, but all have failed - until now. 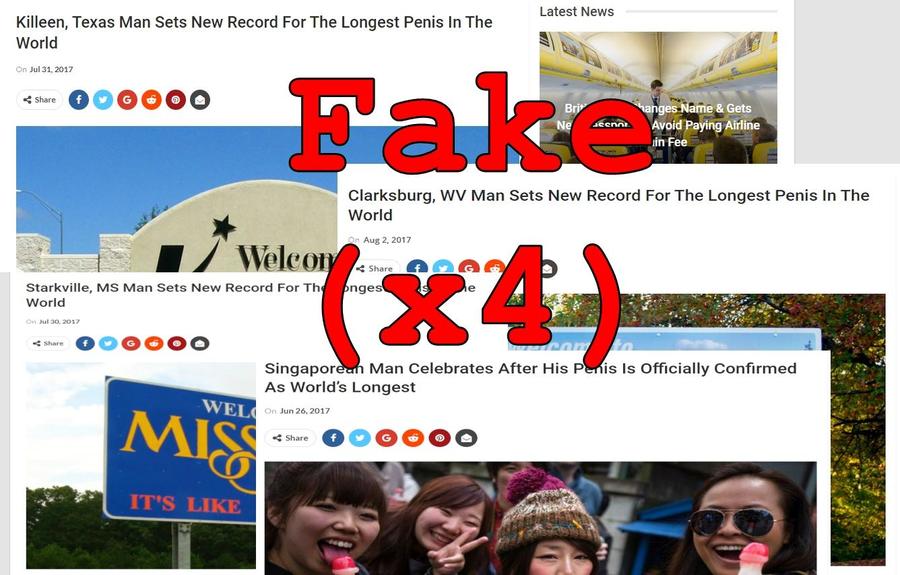 The bit about Roberto Esquivel Cabrera having a giant wedding tackle is true, but obviously you can't have four guys in four different cities with four different ages all break the record by the exact same amount. Also, there is no such thing as the "world record authority". I guess the thing that comes closest is the Guinness World Records website but they don't have an entry for "longest penis" right now (at least not for humans).

We hate to be a dick about this, but these four stories are clearly fake news. That didn't stop the story from rising fast as the Trendolizer graph at the end of this article shows. If any of your friends are worried about their relative size compared to the new world record, send them over here to be reassured.