Fake news website Proud Patriots posted an article titled "Trump's Sec. of State Just FIRED EVERY Obama and Hillary Person At The State Department!!". The article has no publication date but it appears to have been published on the site on August 5th 2017 or thereabouts. It opened:

Trump's team is going to be cleaning up the CIA, FBI and NSA, but the Secretary of State Rex Tillerson is starting with cleaning house at the State Department.

Many of the people who got fired were 'big people working on the seventh floor. This tells us Trump doesn't care about your position, he just cares about how you do your work and your work ethic.

The clean-up is being done at the White House because someone has been leaking information about presidents talks with world leaders and it has made us look like a bunch of idiots in the past. 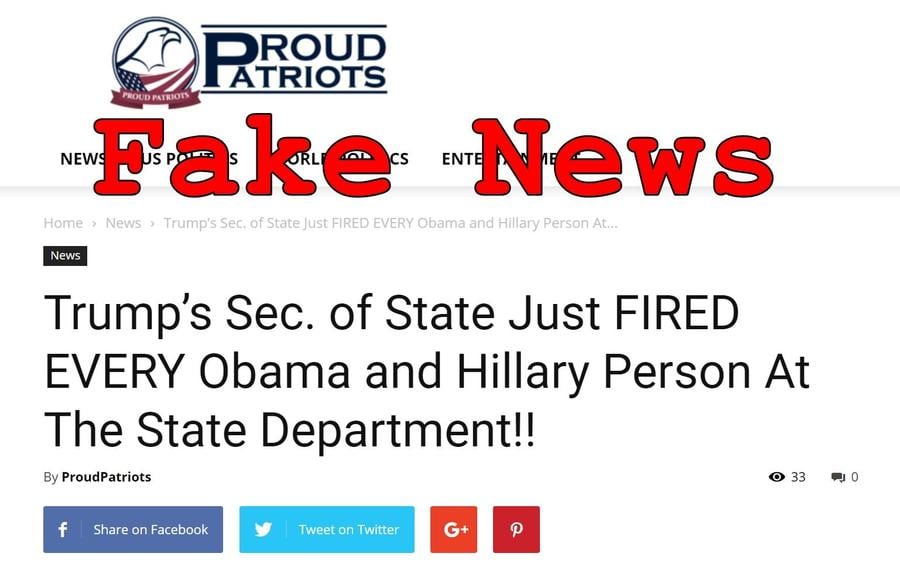 There are several reasons why this story is not true. No other media outlets reported about mass firings on August 5th 2017 so the "Just" in the headline is definitely false. No names or job titles are given for the people that were supposedly fired either. The article also has no byline from an actual person, just "ProudPatriots" and carries no publication date.

ABOUT US
Newspaper is your news, entertainment, music fashion website. We provide you with the latest breaking news and videos straight from the entertainment industry.
Contact us: [email protected]

Looks like the owners of the site didn't even bother to change out the default values when they picked a template for it. Not very convincing and doesn't inspire confidence in the journalistic standards of the site.

Googling the title of the story we dredged up this cached copy of an article with mostly the same text but posted on the now defunct website "americanrevolution24.com". Google's cached copy was dated "7 May 2017 23:36:28 GMT", further discrediting the word "Just" in the title.

Based on all this we are going to go ahead and call this one fake news.

But that didn't stop this poorly sourced and copy-pasted garbage article from trending widely as the Trendolizer graph at the end of this article shows. If you notice anyone spreading this crap around you can help by pointing them to this article here because nobody likes fake news.