The satirical fake news site Our Land of the Free posted an article titled "White Supremacist Who Killed Protester Is A Democrat And Visited Obama In Oval Office". It echoes an earlier bit of fake news that we wrote about a few days ago (Fake News: NO Evidence Charlottesville Killer Was Hillary Supporter Funded By Soros). The new article opens:

Conservative author Dinesh D'Souza uncovered something that blows the Left's whole narrative to bits. While they have been throwing around claims that the whitesupremacist who ran over a protester who was blocking the road is a Republican, D'Souza discovered he actually an Obama-supporting Democrat.

"Rumors abound on white nationalist forums that Kessler's ideological pedigree before 2016 was less than pure and seem to point to involvement in the Occupy movement and past support for President Obama," the Southern Poverty Law Center notes in their profile of Kessler.

The article is accompanied by a crudely photoshopped image of what appears to be the head of James Alex Fields superimposed over a picture of comedian Will Ferrell meeting President Obama in the Oval Office. James Alex Fields is the actual suspect who is accused of running over the protesters in Charlottesville. He is not the same person as the Jason Kessler mentioned in the D'Souza tweet or the Southern Poverty Law Center profile. 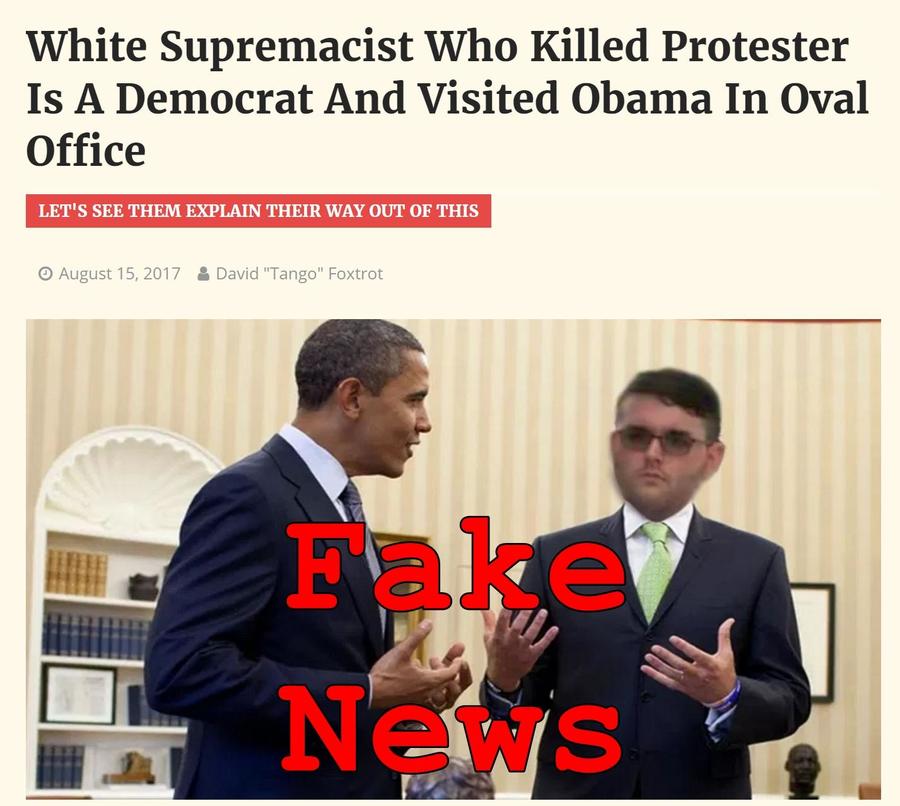 On top of that there is a clear satire disclaimer at the bottom of the page:

Therefore we make no guarantee that what you read here is true. In fact, it most definitely is not.

Our Land Of The Free is here to entertain you with the kind of whimsical satire conservatives enjoy.

In our book "whimsical satire" is required to be at least a bit funny but you can't have everything you want. In any case this is clearly a bit of fake news masquerading as (bad) humor, don't fall for it.