The best way to restore public faith in government institutions is to "send Hillary to prison", according to Hollywood icon Morgan Freeman, who warns that unless the former First Lady's crimes are seen to be punished, "everyday Americans will forever know, deep down, that there is one law for those with money and power, and another for the rest of us."

"Hillary should be in jail for her unlawful deeds and President Trump should absolutely, absolutely make sure this happens to send the very strong message that no-one, and I mean no-one, is above the law in the United States of America," Morgan Freeman said in New York while promoting National Geographic's new docu-series The Story of Us.

Responding to a question about why he thinks President Trump has not yet fulfilled this particular campaign promise, Freeman laughed and said and looked up at the heavens before saying, "Goddamnit man, you were elected for this very reason, lock that bitch up!"

After being accused of political incorrectness, Freeman laughed again, saying "It's all about being loving and caring these days, isn't it?"

The site offered no evidence that Morgan Freeman had actually said any of these things. Freeman is an avowed democrat who provided the voice-over introducing Presidential candidate Hillary Clinton during the 2016 Democratic National Convention so it would be quite out of character to have said these words. Also, it has now been almost day since the article was published and no reputable news sources have picked up the story, something that would definitely have happened if Freeman made these comments during a promotional event. 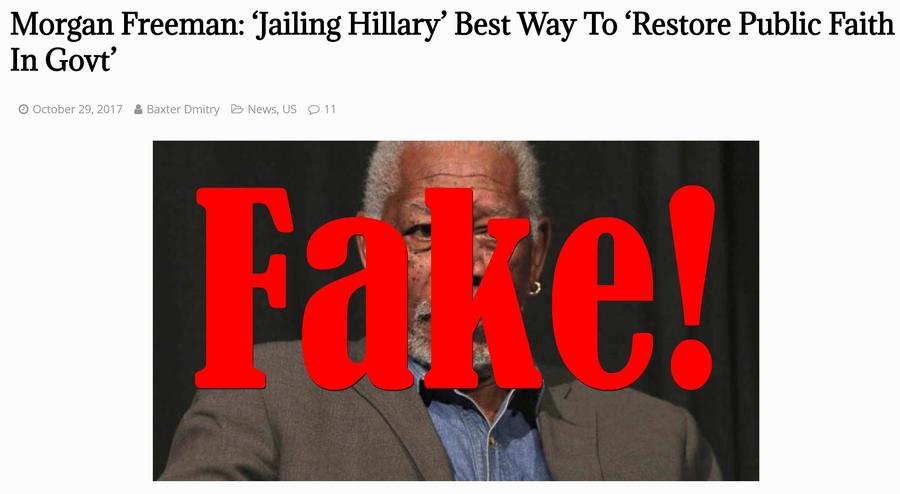 So without further evidence being present (like a video) of Morgan Freeman actually speaking these words we are going to go ahead and call this yet more fake news.