Recently we criticized an article by fake/satire website Freedum Junkshun titled "BREAKING: Black Soldier Killed In Niger Was A Deserter" for using the real name and real image of a soldier who died in Niger (Sergeant La David T. Johnson) and accusing him of being a deserter without the slightest shred of evidence. The website has now pulled this article and posted following apology to their Facebook page:

Friends and turds alike,
The author of the article about a deceased soldier being a deserter decided to pull the story, and I fully support his decision.
It was pointed out to us that we should have used a fake name and photo, and we agree. The author got so caught up in paraphrasing an actual conversation he saw on Breitbart that he didn't think to do that because he was so furious with those idiots. He agrees with the general sentiment that he was wrong in not changing the facts more like we normally do.
This page and all its affiliated pages and websites are committed to posting nothing but pure satirical fiction, and we regret that facts made their way into our narrative.
As always, thank you for your continued support, and I offer a personal apology to the family of the soldier in the story. The revenue from the article will be donated to Operation We Are Here, a relief fund for Gold Star families.
~ BT

"BT" is short for Busta Troll, the owner and main writer of the site, self-professed liberal troll Christopher Blair, a man from Maine who has made it his full time job to troll gullible conservatives and Trump supporters into liking and sharing his articles. He runs several other websites such as asamericanasapplepie.org, ourlandofthefree.com and nunadisbereel.com (formerly thelastlineofdefense.org). He has at least one accomplice who writes under the pen names "Freedom", "Captain Jellypants", "Butch Mannington" or "Captain Buck Atlantis" (who wrote the offending article). 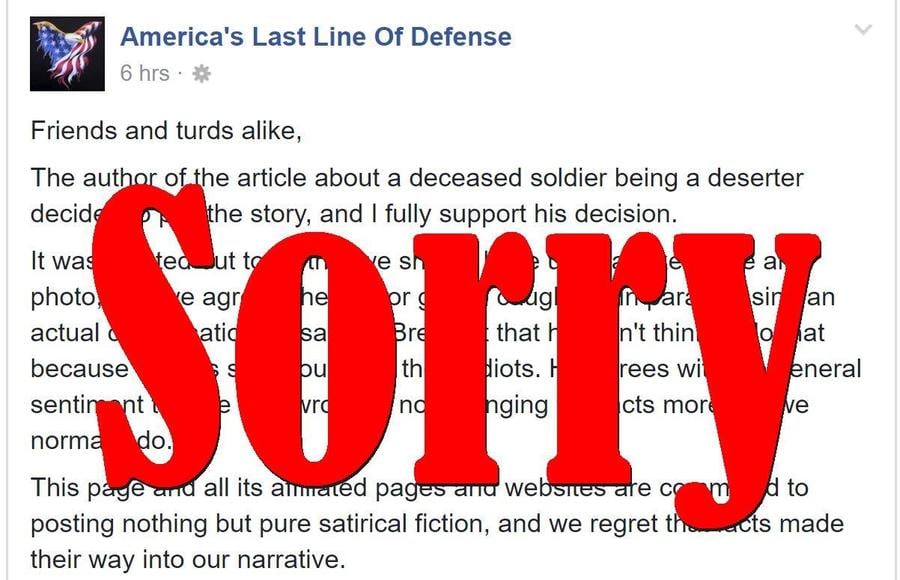 In an email to Lead Stories the author of the original stories explains what happened:

Hey, just wanted you to know we pulled the "soldier" story from Facebook. It was pointed out that we should have used a fake name and photo, and they were right. That was my fault. I got so caught up in turning an actual discussion in Breitbart's comments into an article that I didn't even think to fuck with names and stuff and such like I normally do.

Apology accepted as far as we are concerned. A bit of honesty from a fake news site is quite refreshing sometimes...