Fake/satire website The Resistance: The Last Line Of Defense has announced they are online again in an article titled: "Infamous 'Fake News' Site Resurrected By Russian Trolls". Recently Facebook blocked users from posting links to the site forcing it to adopt a new domain name (nunadisbereel.com). That name now seems to be abandoned (along with the original thelastlineofdefense.org) in favor of the new thelastlineofdefense.online. The announcement opened:

A website known only as "The Resistance" appeared just around election time a year ago only to wreak havoc on the American free press. A Russian troll who goes by "Bustavny Trollyichka" started the site for the sole purpose of lying to people of "lower intellectual affluence" and to make a little money on the side for beer and weed.

The site is technically considered "satire" because it has disclaimers that none of the turds who go there bother to read. Instead, they share the articles and comment on the Facebook page only to be attacked by a group of Russian trolls posing as liberals.

A couple of weeks ago, thanks to a pretentious cockweasel named Sky and his misinformed and unprofessional sister who works for a liberal "fact-checker," The Russian network was left in shambles. Even though they did nothing, have no reach and spent more time deleting comments from people disagreeing with their holier than thou attitudes, victory was declared. Certainly, this would be the end.

The name "Bustavny Trollyichka" seems to be a play on "Busta Troll", the nickname of Christopher Blair, the owner and main writer of the site. He is a self-professed liberal troll from Maine who has made it his full time job to troll gullible conservatives and Trump supporters into liking and sharing his articles. He runs several other websites such as asamericanasapplepie.org and ourlandofthefree.com. He has at least one accomplice who writes under the pen names "Freedom", "Captain Jellypants", "Butch Mannington" or "Captain Buck Atlantis". 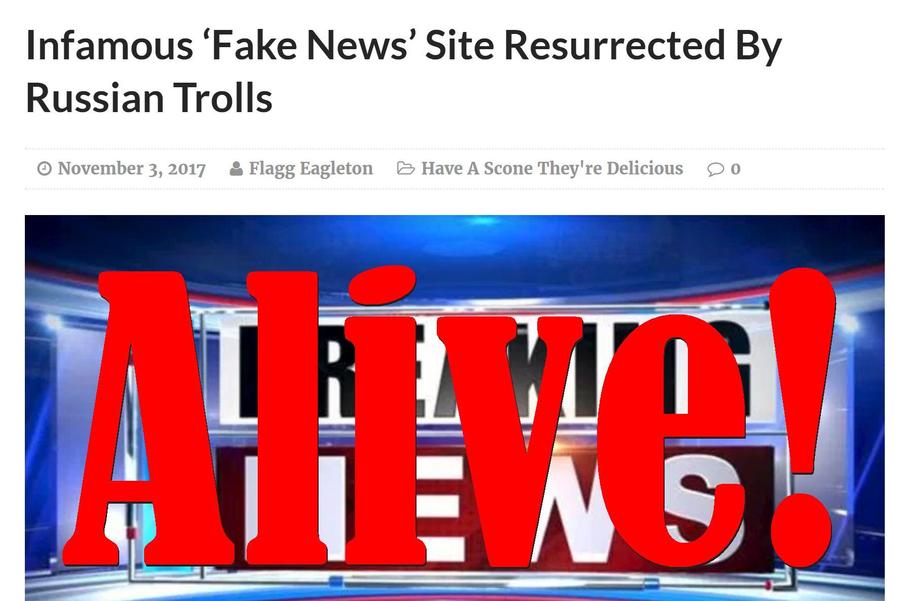 Recently one of his sites posted an apology to Facebook after having used the real name of a fallen soldier in a spoof story and accusing him of desertion. It appears the current article is related to that episode. The "pretentious cockweasel named Sky and his misinformed and unprofessional sister who works for a liberal fact-checker" is probably a reference to Bethania Palma from Snopes.com with whom Blair claims to have been locked in some sort of vendetta according to a post on his Facebook profile:

We will update this story if there are further developments...