Some joker used prank website React365 to post an article titled "Devastating Snowfall Predicted For NW Montana In Early 2018". The full text of the hoax read:

Meteorologists at NASA's Charles Darwin Research Facility have recently discovered a disturbing cosmic anomaly that they are certain will cause record snowfalls to hit the entire Northwest Corridor this coming winter. Northwest Montana will face the brunt of this storm, with snowfall levels predicted to reach 34 feet in the month of January alone. If that's not enough, winds of up to 120 mph are predicted to prevail throughout most of the latter half of January, and into early February.

"It's something we've never seen before, and it's a real concern. People need to be aware of this, so they can start evacuation preparations immediately. Winter is coming.", said Jack Moff - Chief Analyst of the elite NASA research team.

Residents of the affected areas are urged to find alternate living arrangements as soon as possible. We'll update this article soon, as more information becomes public. 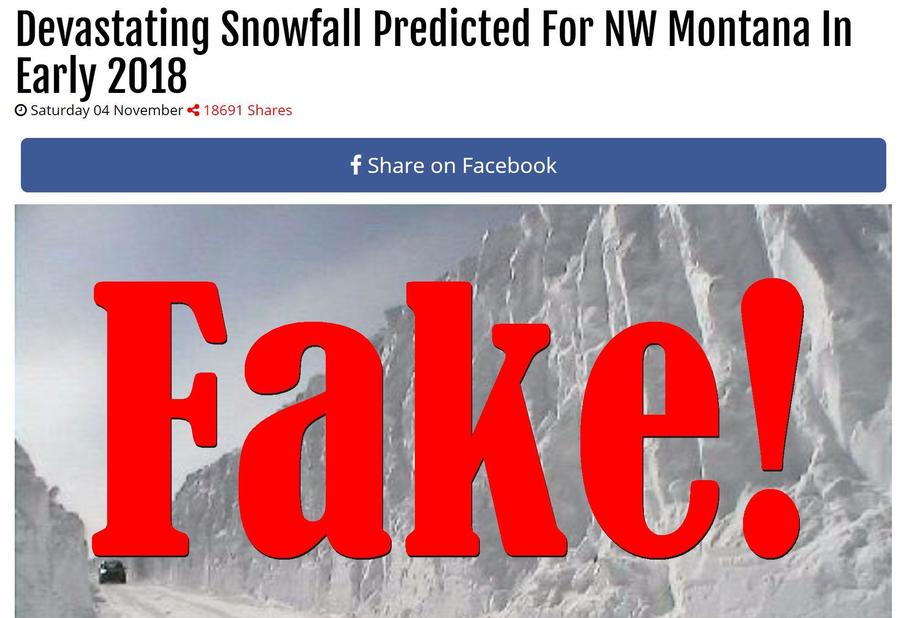 None of it is true. There is no NASA-operated "Charles Darwin Research Facility". The thing that comes closest is the Charles Darwin Research Station on the Galapagos Islands in the Pacific Ocean (which is not operated by NASA). But that station is set up to study (evolutionary) biology and is not interested in detecting any "cosmic anomaly". Also, the name of the "Chief Analyst" Jack Moff mentioned in the story sounds a lot like something Bart Simpson would use when pulling off one of his signature prank phone calls:

In addition to that you should probably known that React365 is a prank website where users can submit their own headline, description and photo to create realistic looking prank news articles. It even carries a disclaimer at the bottom of every page:

So don't fall for this prank now that we've warned you about it! If you live in Montana, no need to look for alternative accomodation...