Satirical site The Last Line of Defense published a story (archived here) titled "BREAKING: FBI Was On The Way To The Clinton Compound With A Warrant When It Caught Fire". It was quickly copied by several "real" fake news sites like patriotunited.club, mamaupgrade.com, bestnewsusa.com and newpoliticsfuturenews.com. The article opened:

FBI Special Agent Scott MacTaggart has confirmed to Fox News that he and his team were on their way to serve a warrant on the Clinton residence in Chappaqua, New York when they got word that a fire had broken out. Their mission was scrubbed and they were sent back to Manhattan to regroup.

The fire, which was conveniently confined to a building behind the residence "operated by the Secret Service" gives the Clintons plausible deniability to destroy any documents they may be hiding there.

The story is very unlikely to be true since warrants in general don't spontaneously catch fire on the way to the place to be searched. 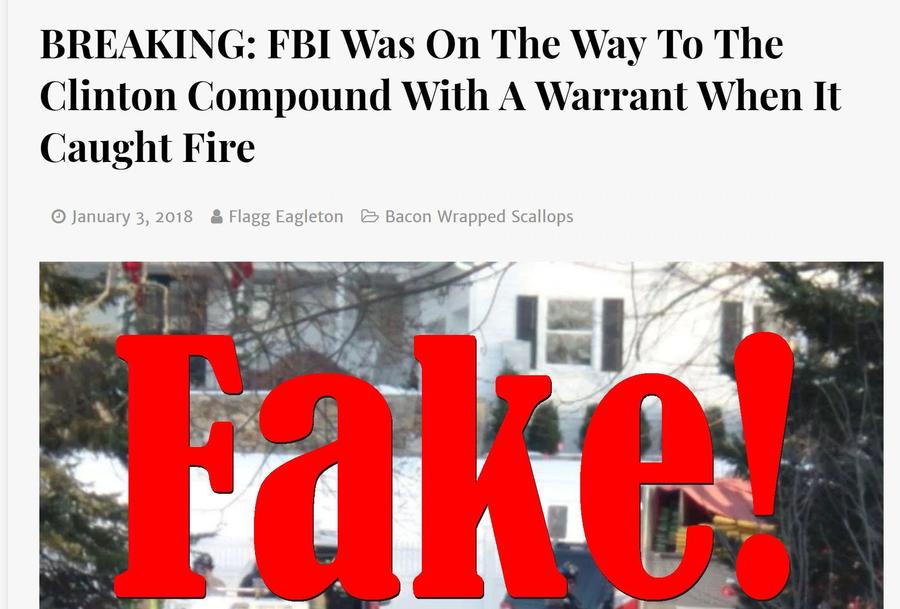 Also all kidding aside "The Last Line of Defense" comes with a clear satire disclaimer at the bottom of each article:

Articles from Blair's sites frequently get copied by "real" fake news sites who often omit the satire disclaimer and any other hints the stories are fake. Blair has tried to get these sites shut down in the past but new ones keep cropping up (and he keeps swatting them down).

According to numbers collected by Lead Stories the original article managed to collect about 400 likes/shares/comments on Facebook while the most successful copy (on patriotunited.club) easily got over 4000. We expect Blair isn't exactly happy about this and if the past is any indication for what will happen next the copycat sites will soon get a number of DMCA complaints to deal with.