The meaning of "religious freedom" has been repeatedly perverted by liberal perverts over the years, but Muslim waitress Sallah al-Sallah took things farther than usual when she used it to take away the rights of 27 Christians, many of whom were children.

The St. Pleasant Allegorical Church of the Divine decided to do something nice for the people in the choir and take them out to dinner at the Waffle House in Arnbur, Michigan -- but their fun evening took a horrible turn when they met al-Sallah.

The church group had called ahead to let the restaurant know they had a large party, but when they arrived they told Sallah their group name and she instantly became "combative" according to Pastor Joe Friedrichs.

"She told us she couldn't seat us," Friedrichs told the Arnbur Explorer in an interview published the day after the incident. "

It is not true because The Last Line of Defense comes with a clear satire disclaimer at the bottom of each article:

In addition there is no publication named "Arnbur Explorer" or a "St. Pleasant Allegorical Church of the Divine" (the name alone is a dead giveaway). 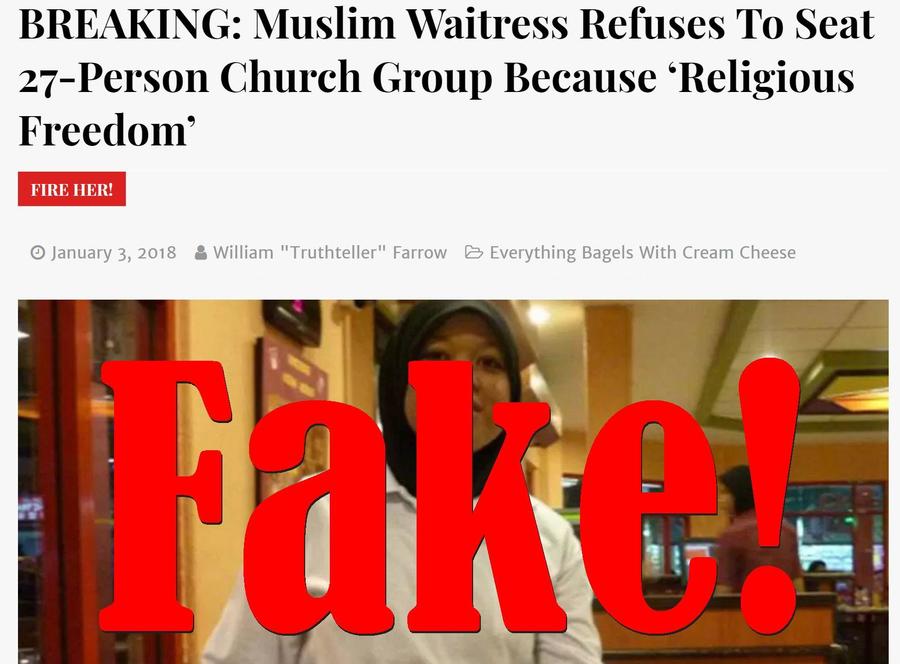 A funny twist is that the picture used with the story seems to be lifted from a story on a right wing website about a customer who refused to be waited on by a waitress because of her headscarf.

Another thing the site has is this copyright notice in the footer:

That didn't deter several sites like patriotunited.club, newpoliticsfuturenews.com or mamaupgrade.com to simply copy the entire article (omitting the satire disclaimer in the process), something which got them more likes and shares than the original. However that might not have been a good idea given who publishes The Last Line of Defense.

It is self-professed liberal troll Christopher Blair, a man from Maine who has made it his full time job to troll gullible conservatives and Trump supporters into liking and sharing his articles. He runs several other websites such as asamericanasapplepie.org, ourlandofthefree.com and freedumjunkshun.com. Sometimes he is also known under his nickname "Busta Troll". He has at least one accomplice who writes under the pen names "Freedom", "Captain Jellypants", "Butch Mannington" or "Captain Buck Atlantis".