There is no truth to reports that OJ Simpson is back in custody after being arrested outside a nightclub in "Oxenflood". He also didn't carry a Canadian passport, a pistol, a knife or $400K in cash. How do we know all this? First of all, there is no town called "Oxenflood", not in New York (as the original story claimed) nor anywhere else. You can look it up for yourself on Google Maps. But more importantly, the story originated on a satirical website by the name of Daily World Update where it was published on January 17th 2018 under the title "BREAKING: OJ Simpson Back In Custody" (archived here).

OJ Simpson was arrested late Tuesday evening at a nightclub outside of Oxenflood, New York, just south of a little-known Canadian border crossing upstate. Simpson, who was armed with a pistol and a knife, was carrying a fake Canadian passport and nearly $400K in cash.

It also claimed Simpson was picked up by the New York State Police and brought to the county jail in Fishkill from where he would then be transported back to Nevada. That is also not true, for the same reasons. 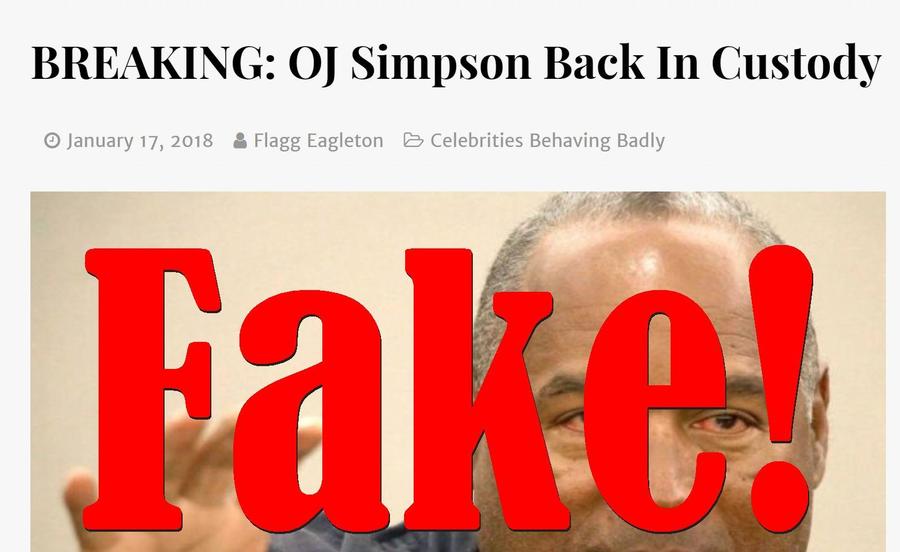 If that isn't enough for you, there is also the site's about page:

Everything on this website is fiction. It is not a lie and it is not fake news because it is not real. If you believe that it is real, you should have your head examined. Any similarities between this site's pure fantasy and actual people, places and events are purely coincidental and all images should be considered altered and satirical.

You'd have to be really dim to still think the story was real after reading that.

At the time of writing the story hadn't been copied yet by the legion of fake news sites that regularily copy Blair's content but we expect that to happen shortly.

If you are reading this later and you saw the story on a site that did not contain the satire disclaimer you now know what happened. Don't fall for it, don't be fooled, warn others.