Contrary to reports you may have read 18-year-old Rachael McLaughlin did not die at Belfast Royal Victoria Hospital today as a consequence of using a counterfeit Kylie Jenner brand lip kit. The news about her death originated from a site that is part of a network of known fake news websites.

The original story was posted on a site named "ABC News" with the deliberately deceptive domain name abcnewgo.com, which has nothing to do with the real ABC News website hosted at abcnews.go.com. The article appeared on February 14th 2018 and was titled "BREAKING: Irish teenager dies after using FAKE Kylie Lip Kit" (archived here). It opened:

BELFAST - An Irish teenager who was rushed to the hospital at the weekend after using a fake Kylie Jenner lip kit dies, the family confirms.

According to the report, she was left struggling to breathe and unable to feel the bottom of her face after applying the knock off lip gloss last weekend.

We contacted Rachael's sister on Facebook and she confirmed that the teenager was alive and well. 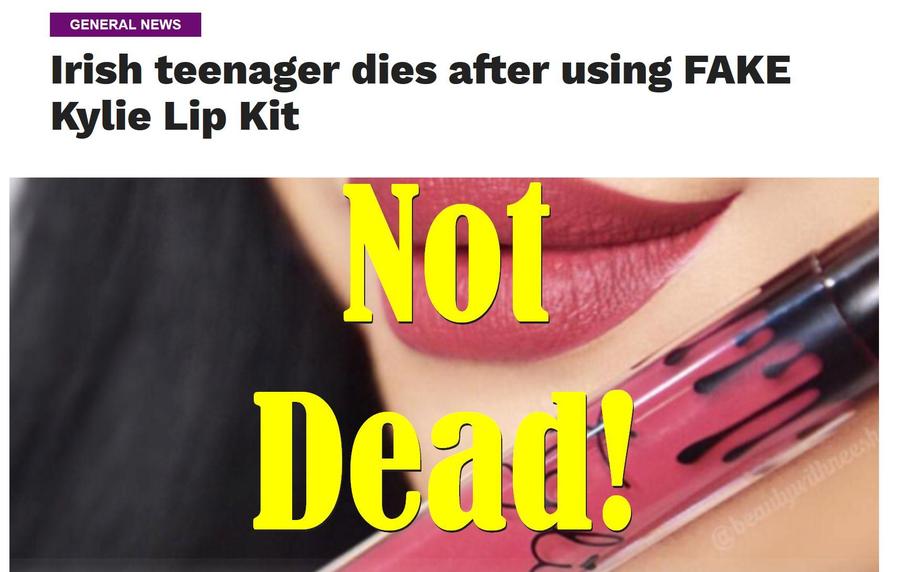 This isn't the first time we reported on a hoax originating on abcnewgo.com. A while ago it also ran a death hoax about comedian Ken Dodd. Further investigation by Lead Stories revealed that the site was part of a larger network of fake news websites and that the latest tactic used by those sites appeared to be publishing death hoaxes about famous people that had recently been the subject of media reports about them being admitted to hospital.

It looks like the network has now lowered the bar even further and attempted to run a death hoax on a non-famous person that was reported to be in hospital. So far it looks like the hoax hasn't gone viral yet but given the nature of the network behind it we expect attempts will probably be made to promote the story in the near future.