Is President Donald Trump planning to cut 315 million dollars in aid to South Africa over "white genocide"? There have been no official announcements or statements pointing in that direction so we are going to go with "No" on that.

Origin of the rumor is a blog by the name "Free Speech Time" on Google's Blogspot blogging service which published an anonymously authored and undated article somewhere in March 2018 titled "Trump To Cut $315M US Aid To South Africa Over White Genocide" (archived here) which opened:

What's happening to white farmers in South Africa is one of the most appalling human rights abuses happening in the world right now.
Whites in South Africa are being denied jobs and will soon have their land taken away without compensation. As a result, more and more people are finding themselves living on handouts in white squatter camps because they are routinely denied help from anywhere else.
Where are all human rights organizations in the West? Where are all the UN bodies?

The rest of the article doesn't even mention Trump or U.S. aid so it is unclear what the source for this "news" is. A search on the official White House website for "South Africa Genocide" returns just one result, a press briefing from 2017 which happens to have the phrases "South Florida", "North Africa" and "ISIS genocide" in it.

As I have long been saying, South Africa is a total - and very dangerous - mess. Just watch the evening news (when not talking weather). 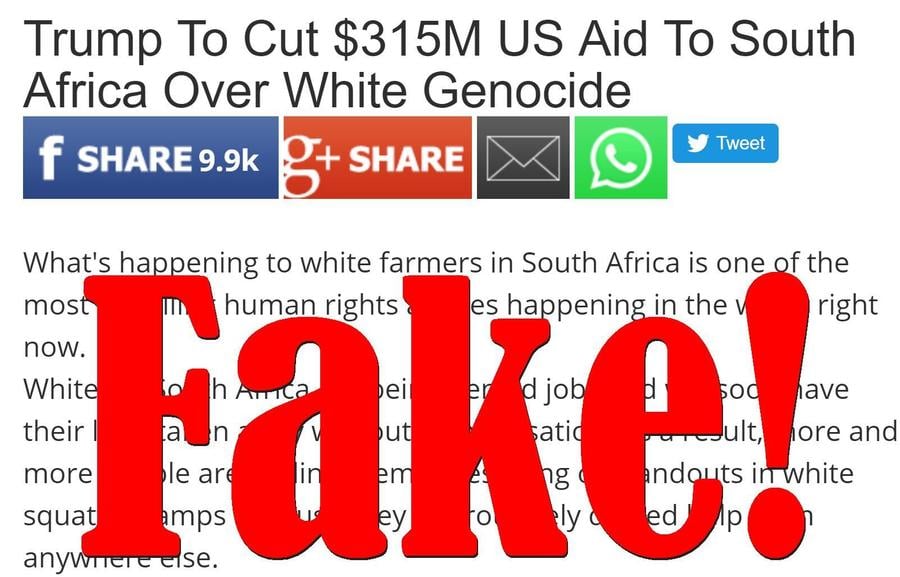 The website "Free Speech Time" seems to be linked to a website named "I Support Israel" through a common Google Analytics account: "UA-27810882" and to about a dozen other sites via a shared Google Adsense account ("ca-pub-9060521233532013") including the infamous and now defunct fake news website "True Trumpers". Clearly not signs that this is a reliable and trustworthy news outlet.