Did the Keystone Pipeline just burst? Is the pipeline "spreading mass devastation" in North and South Dakota while President Trump watches Fox? An alarmist story would have you believe the pipeline is currently spilling 210,000 gallons of oil while contaminating the earth and the groundwater. However that is not exactly the truth.

The alarm was raised in an article on March 13th 2018 on The Bipartisan Report titled "BREAKING: Keystone Pipeline Bursts Spreading Mass Devastation As Trump Watches Fox" (archived here) which opened:

Donald Trump has part ownership in the Keystone Pipeline, so it was no surprise that he okayed finishing it in North and South Dakota. Native Americans held vigil for months in the freezing temperatures to protest the pipeline adjacent to their lands. Now this.

That cleary implied something just happened. It also implies Donald Trump is partially the owner of the pipeline, something for which we haven't found any evidence (it is owned by the TransCanada Corporation, a Canadian company).

The story also includes an image of this tweet from March 11th 2018 (archived here):

This is the largest Keystone oil spill to date in South Dakota- https://t.co/C4TDefbKWo

The picture vaguely looks like a destroyed pipeline but it is clearly an image of a pipeline under construction with the various sections waiting to be assembled and put into the ground. But most importantly the link in the tweet goes to a CNN story from November 17, 2017 about a leak that happened three miles southeast of the town of Amherst back then. 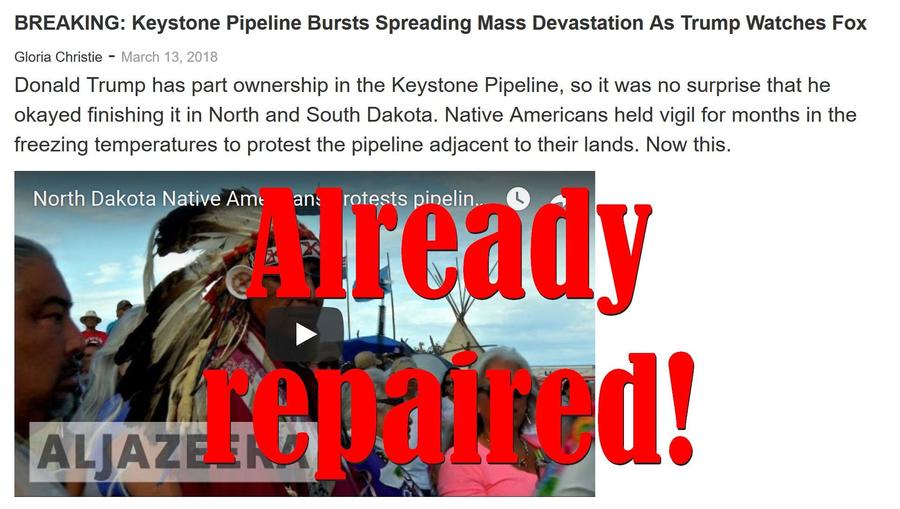 The Bipartisan Report completely fails to mention that this leak has already been repaired months ago with 44,730 gallons of oil recovered and the soil replaced and reseeded. That doesn't sound like "mass devastation" to us.

The pipeline has in fact been operational again since late November 2017. TransCanada announced all this on a special page about the incident on their website:

On November 26, 2017, only 10 days after the initial spill, they were already able to report this about the ground water:

We continue to use sophisticated air-monitoring equipment at all times - though there have been no significant concerns. As well, there have been no water issues to date. Local TransCanada experts continue to monitor water quality, including additional well water testing for local landowners within the area.

So beware of being fooled by alarmist websites trying to gin up clicks and shares for profit, whatever your opinion is about building pipelines.