Was fact checking website Snopes.com recently 'exposed' as a CIA operation? No, that's nonsense peddled by an unreliable website that likes to copy paste together bits and pieces of articles from other websites and then adds unsupported facts in the headline and first paragraphs to make it more juicy in order to get clicks, traffic and ad revenue.

The CIA hoax originated from an article published on April 29, 2018 by YourNewsWire titled "Snopes Finally Exposed As CIA Operation" (archived here) which opened:

Using Snopes as a trusted authority is dangerous. According to a recent investigation, the so-called fact-checking organization is actually a front for the CIA.

According to investigative journalist Wayne Madsen, Snopes was formed by the Central Intelligence Agency in order to spread disinformation on the internet, and stifle subversive outlets. 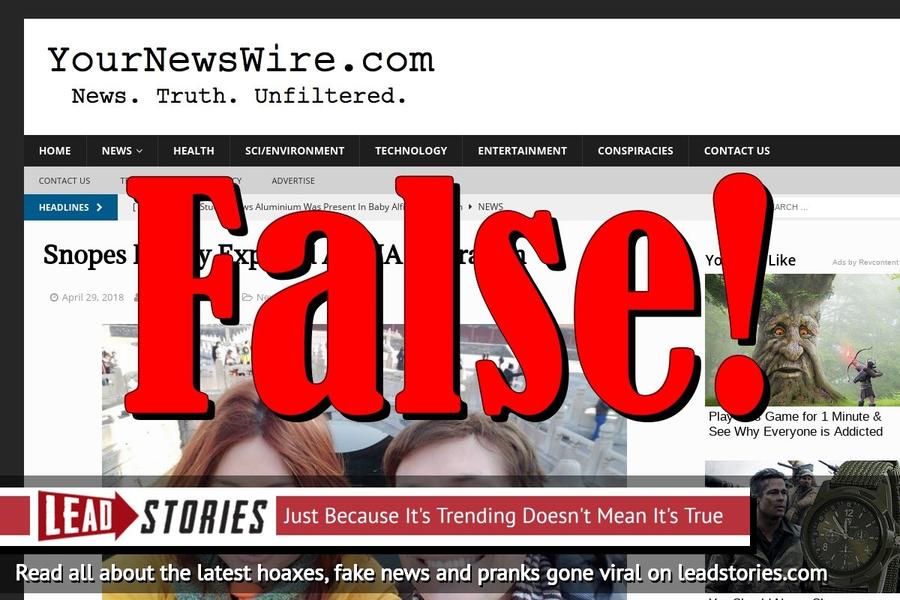 OK, if a 2016 article from a website run by one guy counts as "a recent investigation" there might be something there. Unfortunately it is behind a paywal. Lucky for us a different site seems to have a copy of the article which YourNewsWire quotes extensively.

Snopes's most recent dissembling of the truth was to discount reports from Greece that Turkey has been shipping weapons disguised as furniture shipments to Islamic State of Iraq and the Levant (ISIL) and affiliated terrorist groups in North Africa and Europe.

Snopes claims that because the story of a Greek Coast Guard interception of a weapons shipment south of the island of Crete dates from 2015, there is no validity to the Turkish connection to weapons shipments to ISIL terrorists.

What Snopes was debunking was the claim the weapons were headed for refugee camps in Europe:

Photographs show a cache of weapons uncovered by the Coast Guard in Greece, disguised as furniture and headed for European refugee camps. False In September 2015, social media users in Europe and the United States debated the merits of accepting an influx of refugees from war-torn regions such as Syria.

If anything, Snopes was actually confirming the weapons are being sent from Turkey to Libya in 2015, where ISIL was active since at least 2014:

Versions of this rumor were accompanied by still frames taken from the mislabeled video embedded above, which did not depict material being shipped to refugees in Greece (or elsewhere in Europe), but rather embargoed arms being smuggled from Turkey to Libya that were interdicted by the Greek coast guard

Somehow according to the article quoted by YourNewsWire, Snopes confirming weapons being smuggled from Turkey to Libya instead of to refugee camps in Europe means they are 'throwing cold water' on these links:

They could just as easily have refused to debunk the refugee story instead of, you know, confirming the actual smuggling to Libya. But somehow this "proves" they are a CIA front? Yeah, we don't know how that would work either.

We wrote about yournewswire.com before, here are our most recent articles that mention the site: